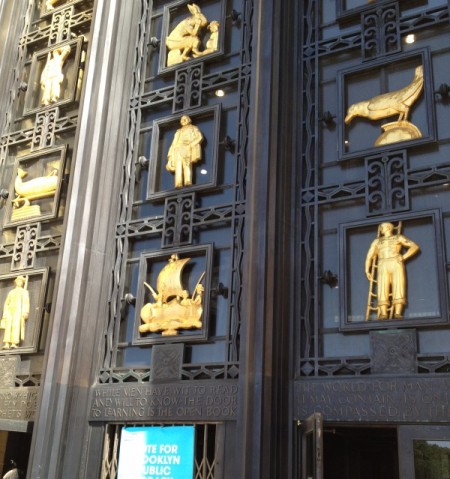 Most denizens of central Brooklyn can boast at least a passing familiarity with Brooklyn Public Library’s imposing Central branch, looking out onto Grand Army Plaza. But did you know that there’s a partially built and never used subway platform beneath it? Can you name all the literary characters portrayed in gold leaf above the main entry doors?* Have you been deep into the basement or high on the roof?

This past weekend, as part of the Partners in Preservation Open House Weekend 2012, some lucky library geeks got a behind-the-scenes look at the familiar landmark, which is vying for $3 million in grant money to replace the original 1937 entry doors beneath those gold leaf figures. (You can help divvy up the money by voting for it and other NYC landmarks up to once a day till May 21.)

The tour began out on the plaza with a look at the curving façade (designed to resemble an open book), and the Art Deco entryway. Inside, things moved swiftly from the Grand Hall to the Trustees’ meeting room, from the elegant Office of the President, with its working fireplace (and rumored shower suite), to the lower ‘decks’ where a former fallout shelter houses what’s left of the iconic Brooklyn Daily Eagle.

With so much to see, discussion at each stop was brief, but guide Fari Bidel and the maintenance staff gamely fielded a wide variety of questions:

On the timing of renovations: “They happen when people give us money—the more you donate, the more we can build.”

On sustainability: “The building lights are left on 24/7 because the layout is so old that there are almost no light switches, and lights are not usually shut off at the panel. I wish we could shut them, then I wouldn’t have to change so many [light bulbs].” (Fortunately for the light bill, efforts are underway to convert the already more-or-less efficient bulbs to LEDs.)

On the most anticipated part of the tour, to actual cheers: “We’ll be going up on the roof very soon.”

In the glow of the late afternoon sun, the view from the rarely visited roof above the library’s Flatbush Avenue wing was worth cheering about. As cameras snapped and people pointed out Manhattan buildings visible on the horizon, two young boys stared intently out over the plaza, and one was overheard saying, “It isn’t like I thought it would be.” That’s the Brooklyn Public Library for you, challenging assumptions on every level.

*This is a key to the figures above the door. It should be noted that we find the choices for some of these fictional characters and real-life writers perplexing. For instance, why Meg and not Jo? And who is Charles Dana? 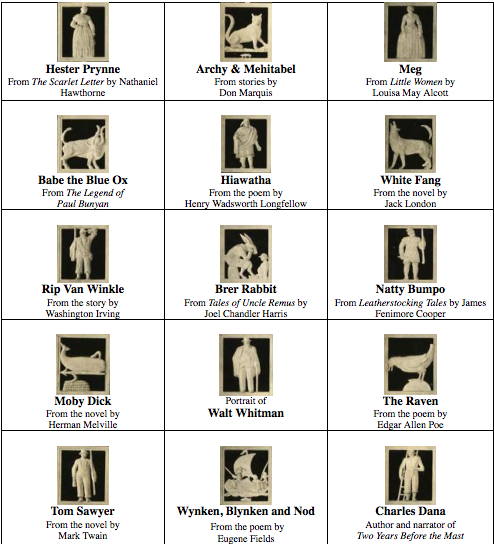