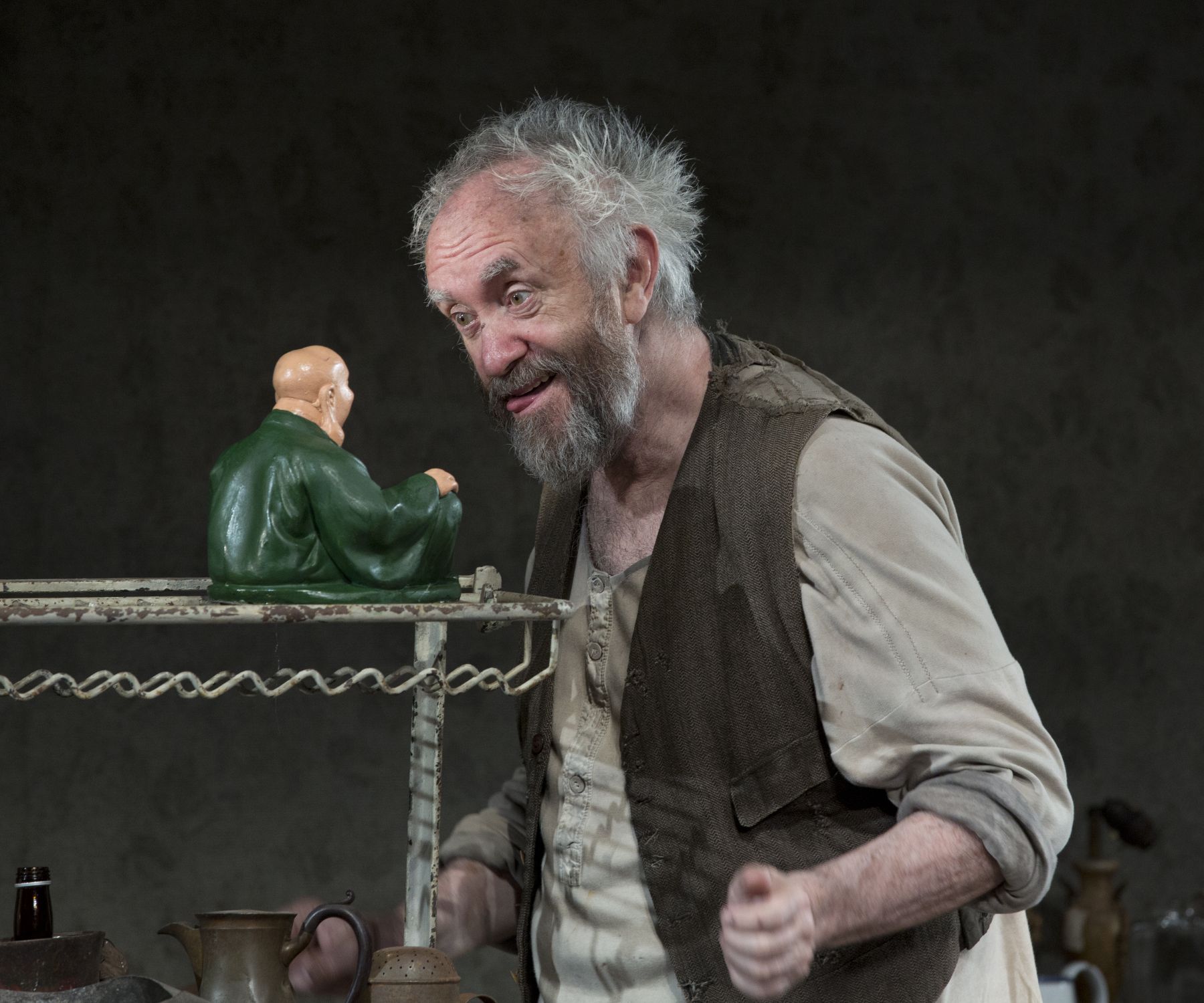 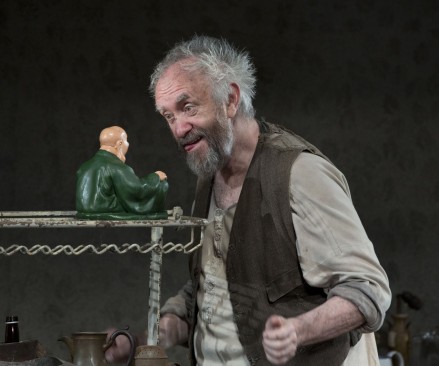 Jonathan Pryce in The Caretaker at BAM, a production that is pleasing many but not all. (photo by Richard Termine)

The old man has clearly been on the move a long time. His clothes are filthy, his hair hopelessly matted—he exudes chronic desperation and neglect. He’s a talker though, always on the take, disarmingly frank about his layers of deception. Almost from the start, and several times thereafter, he tells us that he’s not himself. “The name I go under now,” he lets everyone know, “ain’t my real one. It’s assumed.”

True enough. He’s an actor. This old man in question is British powerhouse Jonathan Pryce, in the role of Davies, the garrulous title tramp of Harold Pinter’s 1960 play The Caretaker, which runs May 3-June 17 at the BAM Harvey Theater, directed by Christopher Morahan for Theatre Royal Bath Productions/Liverpool Everyman and Playhouse.

The Caretaker is a claustrophobic play. Two brothers, an attic room, and the aforementioned tramp, who is invited to stay for a while. The action, such as it is, exists in the excruciating tension between each of these difficult souls, as they perform a kind of pas de trois of one-upmanship, bullying, ingratiation, and occasional spontaneous generosity. In the opening scene, the tramp enters. At the end, he might leave. The audience has no such mobility.

Pinter’s style (and what it owes to Beckett) has made such a distinct impression on contemporary theater that his trademark tropes can seem clichéd—silences, circuitous dialogue, false exposition, parallel scenes, unpredictable violence, and setups without payoff abound. The inexplicable is allowed to remain inexplicable (thank god). Everyone is a stranger.

Pryce’s performance is lovingly detailed, with every cough and fart and sock massage its own little set piece. Alan Cox and Alex Hassell are powerful as the damaged brothers Aston and Mick, especially in their moments of stillness.

Somehow, though, the production remains trapped within itself, carefully detailed and lovingly created, forcefully acted–and a little dead.

This deadness may be related to the impersonal nature of the touring set, a self-contained ecosystem that lets the audience firmly off the hook, insulated beyond an anachronistic fourth wall. It’s hard not to wish that there had been a way to include the gloriously dilapidated walls of the Harvey itself into the design. The real problem, though, is the status of the play itself.

Harold Pinter, with a Nobel Prize and multitudinous other honors under his belt, crossed the frustratingly sacred border into Fine Art long before his death in 2008. We have assimilated his work into the canon, which has a way of diluting its impact in all but the best of situations. In a 2001 review of Pinter’s last stage play, Celebration, New York Times theater critic Ben Brantley describes the play’s protagonists as patrons of consumer art who “have just come from performances of either the ballet or the opera.

Not that they can remember a darn thing about what they saw, including the titles. A man who was at the ballet does note that ‘none of them could reach the top notes,’ while a woman observes about the opera she’s seen: ‘Well, there was a lot going on. A lot of singing.’ ”

Following this sleek production, one gets the uncomfortable feeling that a version of the conversation above may be happening right downstairs in the Harvey’s bar, or on the BAM bus back to Manhattan. And that Pinter, wherever he is now, would have something really uncomfortable to say about that.