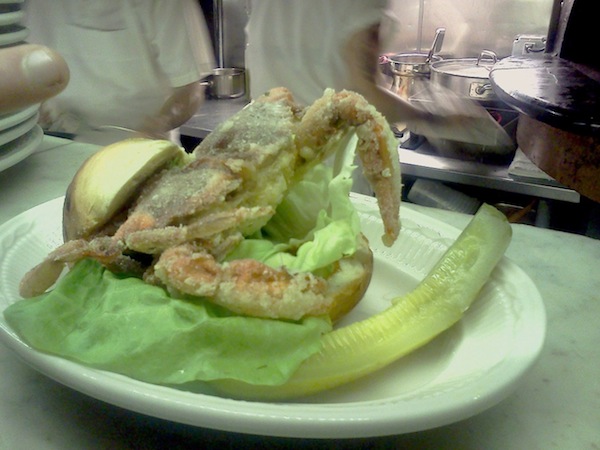 As you most likely know, the upcoming Great GoogaMooga Festival will be bringing basically every artisan food producer in Brooklyn (and some more from Manhattan, too) to Prospect Park for one giant gorge-fest on May 19 and 20. The free tickets–which allow you to enter the festival and pay  for food and drink as you go–are now gone, though some conniving folks are now selling their General Admission tickets on Craigslist. And while you can buy ExtraMooga tickets (at $250 a pop) that will give you “access” to the food below, the all-you-can-eat-drink-and-ogle options for ExtraMooga ticketholders are so good (Graydon Carter’s Monkey Bar reinvented in the Boathouse, April Bloomfield live butchering a pig, a Blue Ribbon Fried Chicken Party) the ExtraMoogas will probably stick to their VIP tents and venues.

The festival comes from the folks behind Bonnaroo and San Francisco’s Outside Lands, so there will be plenty of music on hand. But this being Brooklyn, they decided to make the main focus edibles. GoogaMooga will be announcing the full menu next week, but gave Brooklyn Based a sneak peak. Here are five dishes, each in the range of $6-$15, you should line up early for:

1.  Vinegar Hill House’s Soft Shell Crab Sandwich: If you haven’t gotten in on soft shell season yet, there’s no excuse now. VHH will be pumping out made-to-order, batter-fried soft shells (above). Yes, that’s the whole crab, dropped on a sesame potato roll.

2. James’ Fried Cheesecake Bombs: While this Prospect Heights eatery is best-known for their black kale salad and other locavore fare of that ilk, at GoogaMooga they’re giving that aesthetic a state fair twist. Their lemon-ricotta cheesecake will be turned into a deep-fried cheesecake bomb, topped with fresh mint.

3. Craft’s Dirty Duck Dogs: Tom Colicchio’s high-end Manhattan restaurant will be bringing things downscale for their foray into Brooklyn…but not too downscale. Craft’s GoogaMooga hot dogs will be made from duck and topped with pickled cabbage and black garlic.

4. Maison Premiere’s Ceviche: Williamsburg’s haute oyster & cockail bar will be getting creative on the seafood front, whipping up a ceviche of Taylor Bay scallops, Louisiana crawfish and fennel.

5. Do or Dine’s Foie Gras Doughnut: If you haven’t made it to Bed-Stuy to try this eat-it-once-in-a-lifetime delicacy, now’s your chance to enjoy it out in the grass. While it may sound gimmicky, the foie gras doughnut is actually quite straightforward: a jelly doughnut from nearby bakery Dough, injected full of foie for one ridiculously over-the-top gut-buster.