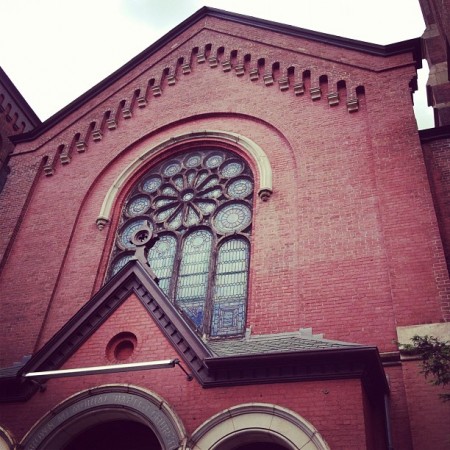 Brown Memorial Baptist Church, which is competing for funds to repair its Tiffany windows

By now you’ve probably noticed that we’ve been encouraging you to vote for the NYC landmarks you love–because your votes will help divvy up the $3 million dollars that 40 sites across the city need to make much needed repairs and improvements.

Now there’s another incentive to vote once a day until May 21st: $50 on an American Express gift card. You can win one by just:

Voting once a day is good for the preservation competition, and good for your chances of winning. We’ll announce the 5 random winners from the comments this Friday, March 18 at 5pm. That’s 5 whole days to cast 5 votes and write 5 comments for a chance to win free money and help out landmarks across the city.

PS: We are being paid to write about local landmarks and the Partners in Preservation competition–which is pretty sweet considering we cover a ton of Brooklyn history anyway. So far we’ve written about the Brooklyn Public Library’s Central Library (currently #1 in the race for funds) and the Greenpoint Manufacturing and Design Center, and this week we’ll be writing about Weeksville and Brown Memorial Baptist Church. There are 5 other landmarks in Brooklyn to vote for–check them all out here.

Leave a Reply to Tiffany Lewis