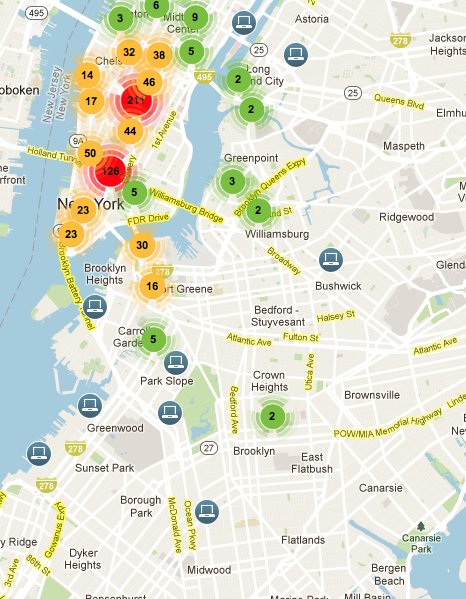 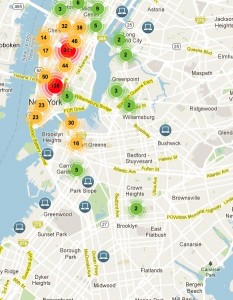 Made in NY Digital Map at a glance

New York’s digital landscape just got a little easier to navigate. Almost 500 digital companies have launched around the city in the past five years, several of which have found successful starts in Brooklyn neighborhoods like Dumbo, Greenpoint and Williamsburg. But did you know Crown Heights has a startup community of its own? What about Carroll Gardens? These were a few digital discoveries unearthed on Made in NY Digital Map, a new interactive guide that paints a comprehensive picture of New York’s digital landscape by highlighting the locations of tech companies, investors, co-working spaces and incubators around the city.

The map was unveiled by Mayor Bloomberg’s office on Tuesday in honor of Internet Week New York, and aside from offering a visual rendering of New York’s tech scene, the map also serves as a job hunting tool by highlighting the more than 325 digital companies in the city that are hiring.

The shortage of tech talent both in Brooklyn and throughout the city is something we reported earlier this week, and Made in NY Digital Map drives the point home visually. The map itself operates much the same as a Google map–users can zoom in and out and concentrate on specific areas by using the navigation tools. A list of digital companies, investors, co-working spaces and incubators can be found on the right-hand side, and those hiring are highlighted in pink. The colored circles with a number inside them on the map itself indicate the presence of tech communities in a given area. Subsequent clicks on any circle will cause the map to zoom in on a specific area and eventually a list of companies located there will appear.

Right now, there are 58 Brooklyn companies on the map, with the majority of the borough’s tech community concentrated down in Dumbo, including Huge and Etsy, both of whom are hiring and offer training assistance initiatives.

Maybe the most surprising thing about the map is seeing tech communities in unexpected places, such as Crown Heights, Carroll Gardens and Fort Greene, which houses more digital companies than all the other neighborhoods in Brooklyn–besides Dumbo–combined.