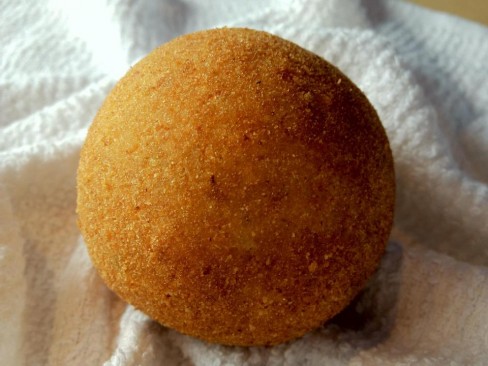 New York is experiencing an Italian food renaissance as of late, with new Neapolitan pizza shops, handmade pasta spots and artisan panini places popping up on a seemingly daily basis. But my favorite addition is the resurrection (and perhaps, perfection) of Sicilian-style fried rice balls, as done by Arancini Bros.

Arancini opened last year along a stretch of Bushwick that seemed painfully far-flung at the time, but, after a year’s worth of rapid hipsterfication, somehow now feels more convenient. They do one thing and one thing only: balls. That is, heaping orbs of gooey risotto, breaded and fried until perfectly golden-brown and crispy. The lineup of what’s stuffed inside the rice balls changes daily, with options like butternut squash and pine nuts; broccoli rabe and sausage; and roasted beets with goat cheese. The traditional meat ragu rice balls are usually on the menu as well, and there’s always at least one veggie option, plus dessert balls like cinnamon and Nutella.

Arancini Bros. is set up adjacent to Bushwick’s Wreck Bar, with two windows–one facing the street, one opening into the bar–so you order to go or wait for your balls while you have a beer inside the bar. Either way, as an appetizer, they’re the perfect solution to the standard two-hour wait at nearby Roberta’s, but can also totally stand alone as a meal, if you order three of four. Really though, they’re best suited to late-night, post-bar drinking, which makes it handy that Arancini stays open until 2am on weeknights and 3am on Thursdays, Fridays and Saturdays.

They are also now serving rice balls at Dekalb Market, and will be at this weekend’s Great GoogaMooga, offering their traditional ragu rice balls, as well as a bianco rosso verde version–basil pesto, mozzarella and cherry tomato.