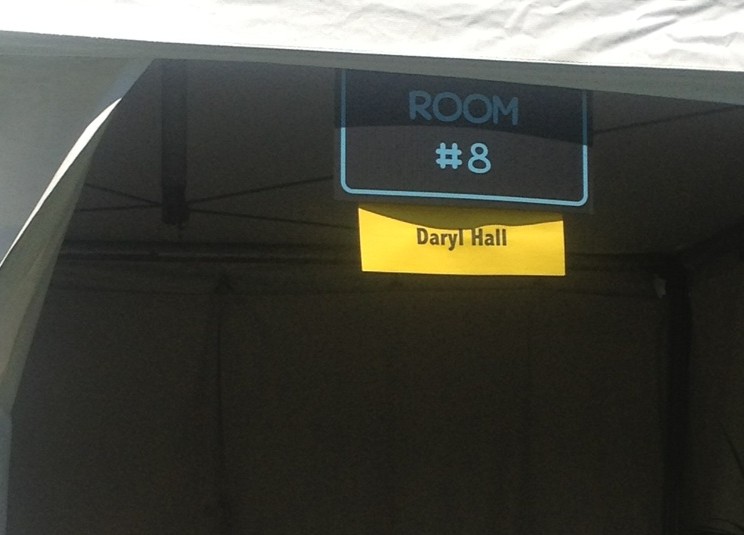 Darryl Hall's dressing room. My phone died before I could take a picture of the man himself.

The Great GoogaMooga, and whether or not the event was a success, seems to be all the internets can deal with on this rainy Monday, so having spent yesterday in Prospect Park, I’ll weigh in here. More later from Kate Hooker, the BB reporter who spent her entire weekend Mooga-ing, climbing trees for cell reception and recharging her phone at ATMs in the name of live tweeting. My phone died so fast (even with a battery pack) searching for signal, that I was unable to tweet, take photos or connect with anyone I might have hoped to hang out with. I’ll leave it to Kate to address the difference between day one and day two–I’m going to delve into the ExtraMooga controversy.

First though, a few notes:

*I shook Darryl Hall’s hand and said, “Thanks for coming to Brooklyn!” It was awesome.

*You know how when you travel without your cell phone and you re-learn how to figure things out by reading a paper map and asking questions in a language you’re not very good at speaking and it’s all exhilarating and you feel resourceful and smart? The lack of cell reception was not like that at all. Next year, get temporary event cell towers. Trying to find someone in the crowd was a nightmare. Plus, they built a whole GoogaMooga app that you couldn’t access.

*I get that lines are frustrating, but man, have you ever been to a popular event in New York that wasn’t mostly a waiting game? I almost got punched at that Village Voice feedlot horror show, Choice Eats, for not understanding where the end of a line was. And there was no music, sunshine or grass to mellow the mood. The bathroom line at Celebrate Brooklyn shows tends to be about 20 minutes long–there are just a lot of us that share limited space. That’s the city.

So, we got some press passes to the Extra Mooga on Sunday, and although I had a great time, I will say that it really should have been called the Extra Booza. And not in the best way.

Let me be clear–I enjoy drinking and I’m not a lightweight. But after riding my bike to Prospect Park, walking the half mile from the bike valet (which was brilliantly run with lots of helpfulness and smiles by Transportation Alternatives, btw) to the press check-in, making my way across the Mooga to the Extra Mooga area, walking around a bit in the sun, and then drinking a delicious grapefruit, Campari cocktail from Clover Club and a glass of white wine I felt INSANE. Like wasted drunk. Luckily, the line at the Pat LaFrieda booth was pretty short so I grabbed half a burger and that brought me back from stumbly keg-party land.

But that really sums up the problem with the Extra Mooga: Everywhere you went the booze was free, delicious and easy to get. The food, not so much. This, as every good hostess (and frat boy party planner) knows can lead to very bad things. Plus, day drinking is an acquired skill and it’s just the beginning of the summer–people are rusty! I got there around 2pm, so I missed the brunch events, which may have been food-filled. By 3pm the main choices for chow in the Extra Mooga area were burgers (which were delicious) and steak bites from LaFrieda, hot dogs and ribs, and the lines at those stalls were pretty long. Plus, there was so much programming, different comedians and talks and music and such, that you didn’t want to wait in those lines and miss it. I felt that way, and I got in for free; I can only imagine how pissy I could have gotten if I dropped half my vacation fund on the weekend.

Also, the snacks at the ExtraMooga events have got to improve. Newsflash: Most catering companies SUCK. No one actually likes canapes. At Hot Tub with Kurt and Kristen the snacks were these unappealing fried potsticker things. And at the beef butchering demo with The Meat Hook they served tiny bites of gray and pink squares of meat on top of: a potato chip, a bun, a slice of baguette, a risotto ball. Also, I saw the caterers in the back drop an entire tray of one of those things, yell, “10-second rule! and then put them back on the tray and into the oven.” No joke. And, when I mentioned to Tom and Brent, who did the demo, how bad the refreshments had been they told me that all that stuff had been made with their meat–brisket and short ribs, which had been turned into unidentifiable, completely flavorless squares of meat.

The whole thing, building a mini-city dedicated to eating, drinking and fun, in the middle of Prospect Park, is no joke, and a lot of what went on was really fantastic. It was certainly very ambitious. It’s just too bad that the people who were most enthusiastic and willing to pony up serious cash for the event, were left hungry.