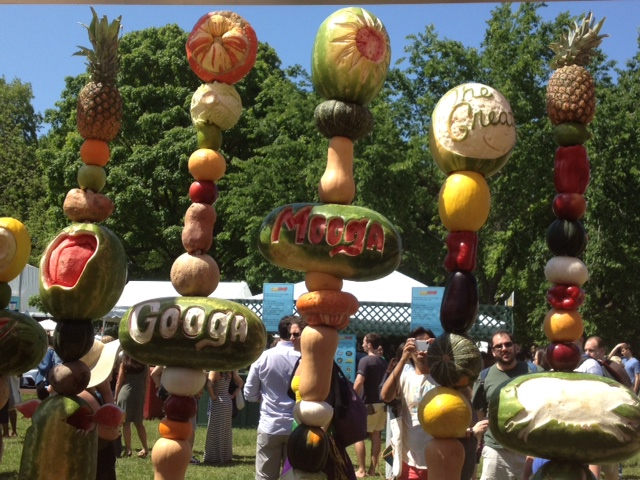 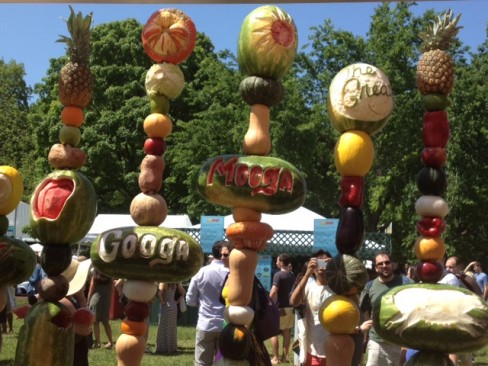 We sent BB Contributor Kate Hooker (@folinsbeek) to live-tweet and give us a blow-by-blow account of her two days at The Great GoogaMooga. Here, in excruciating, hilarious detail, is a record of what transpired between May 19 and 20, 2012, in Prospect Park, because one day people will look back on this insane eating bender and wonder, WTF?

9am Rise & shine with visions of pulled pork and free-flowing craft beer dancing in my head. Time for a quick run because that’s what a normal adult who takes care of her body would do before going all Kobayashi on a two-day festival featuring 73 food stands.

11:57am Sitting on my couch in gym clothes having done everything I could think of that isn’t running, so it’s pretty much a normal Saturday so far. I will be walking around all day, right? Totally the same as running. Yeah.

12:30pm Slathered in sunscreen and loaded with cash (this ain’t my first rodeo or, my first outdoor hipster festival, which, when you think about it, is the precise antithesis of a rodeo), I try to be unfazed by the unsettling wail of unidentified sirens (!) by the entrance and reports that people are already being shut out.

12:42pm I’m in! As a professional live-tweeter, it’s imperative that I broadcast this info immediately, but the unholy alliance of iPhone and AT&T has other plans. Spend next hour and a half looking for a signal like a crazy old guy at the beach with a metal detector. Maybe I try to climb a tree. Weirdly, not one person tries to talk to me and in fact I think I see some backing away. Whatever, I didn’t come here to make friends. But what DID I come here for?

2:12pm Oh right, EATING! Lemon ricotta fried cheesecake bomb from James and a pastrami sandwich from Mile End, in that order. Breakfast of champions, if the contest is who can contract gout the fastest. I don’t realize it at the time, but the pickle spear that comes with my sando is the only vegetable I’ll see all weekend. Sure, I get it guys, you are keeping vegans away, but it seems extreme.

2:53pm Sun is hot, meat is salty. It occurs to me that I need a drink to wash down my meal. HAHAHAHAHAAAA! Oh, the hubris! You thought I’d be able to trade legal tender for liquid, that building block of life, right? Not at the Goog. By now, the line at every food or drink vendor looks like its own Penn Station on the Friday before Memorial Day weekend, if the Hamptons set was possessed by a palpable, all-consuming undercurrent of thinly concealed rage. No food or drink available at the food and drink festival, and it’s not being absorbed well by the patrons.

3:47pm Thirst situation reaching critical. Orbit gum ladies like the ones in the ads are handing out hot towels and I consider sucking the water out of one. Opt instead for a piece of free gum and I’m pleasantly surprised to discover that, against all odds, my mouth can still produce saliva. Then, like a tiny silver parachute of medicine from my sponsors, a juice press stand with a not insane line appears. Spend an exorbitant sum on watermelon juice but manage to not die.

4:16pm Getting booze involves 3 separate lines: one for a 21+ bracelet, one for drink tickets, and one to purchase an actual drink. After the bracelet guy says he doesn’t need to see my ID because I look “older,” my friends and I stand in the next line for 2 hours wondering whether people up front are buying drink tickets or getting approved for mortgages. Rumors swirl that the one percenters in ExtraMooga are swimming in cocktails. Will there be a riot? Maybe. Seriously.

4:17pm Just as the unrest is starting to get borderline scary, “I Can’t Go for That” starts blaring on the speaker system. LOL, well played, GoogaMooga! We didn’t forget Hall & Oates, don’t worry. As subtle as an axe murderer.

5:48pm $12 tiny beer and Red Hook pupusa in hand and all drink-related lines have disappeared within moments of our not being in them anymore. Of course. People seem to have dug deep and rebounded as we head over to watch The Roots. Near mutiny narrowly avoided, but awesome set by ?uestlove et al barely quells the grumbling.

8pm ExtraMoogers and GA peeps alike are NOT happy as we exit the park. Batten down the hatches Twitter, the storm is headed your way.

11:00am What a difference a day makes! It seems the powers that be have realized that this isn’t a Juggalo gathering, and people who choose to attend a celebration of foie gras that is headlined by Hall & Oates are probably old enough to buy beer with actual cash without the world coming to an end. Everyone is happier, and the weather is spectacular.

11:33am NBD, but today I have a golden ticket to ExtraMooga, and I feel like Charlie Bucket or, more appropriately, Augustus Gloop. Of note: all manner of drinks are available in the promised land. Oh yeah, and my phone works just fine here. Grrr. I sip a Pimm’s cup from the Pegu Club and breakfast on some paella from Tertulia.

12:12pm The fried chicken bun from Baohaus tastes like Chik Fil-A covered with McD’s sweet & sour sauce, and I hope that is interpreted as a HUGE compliment.

1:15pm Tom Colicchio, Eddie Huang, and Patton Oswalt hold a panel in ExtraMooga about the European sovereign debt crisis. Kidding! They talk about food! Highlights include Huang’s off-color jokes (“I’m Asian, so I received a birth certificate and then a Yelp profile”), Colicchio’s controversial declaration that squab is the new pork (ed. note: no it is not), and a man wearing an SAE T-shirt asking the panel who should be the target of the next Comedy Central Friar’s Club Roast (Patton: “Anthony Bourdain;” Eddie: “Guy Fieri, literally;” Tom: “Thomas Keller;” Me: “people who wear fraternity shirts post-college”).

1:45pm Most of the people I meet in the Extra section seem to be industry types, so I wonder how many actually shelled out the $250 entry fee. It’s nice back here, but all the foodie talk and insider stuff is wearing me out. It’s like those people from college who obsessively catalogued their live bootleg tapes and would argue over whether 1/9/92 was better than 8/12/98- if you take a cool thing and make it nerdy, it’s just nerdy, IMHO. Head back to meet friends in the GA section and overhear a girl say she wants to try the “buhloggna foy gras grilled cheese” at M. Wells. Ha. A study in contrast.

3:22pm Not even slightly hungry but see an opening at Brindle Room, so I take down a completely gratuitous steak cheeseburger. You know, just an amuse bouche. Hmm, is my left arm feeling a little numb? Hahaha, JK! (Not really JK. Yikes.)

4:17pm Risk of serious health incident subsided so it’s time to hit up Hamageddon, where a “bacon flight” is available and Lez Zeppelin (exactly what it sounds like) is wailing on stage. There is also a pig roasting on a spit inside a giant metal pig-shaped structure that occasionally breathes fire, which someone’s neurotic mom (but not me) might notice seems to get dangerously close to a nearby tree.

6pm Crowd is happy and chill today, except for one horrible girl who gets upset when people walk through the line she’s in because we are in a group of 40,000 people and that’s what you have to do to get to the next place you are going. No one is trying to cut that girl in line. Everyone hates her. If that girl is reading this, you are a nightmare GoogaMooga monster. 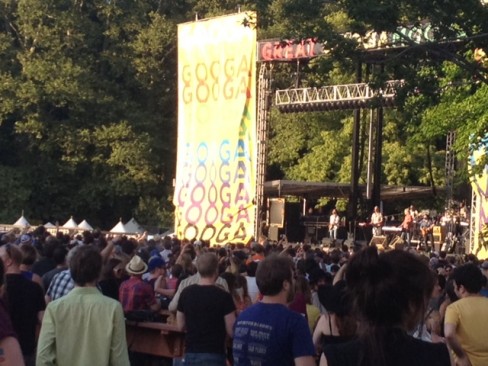 7:45pm Hall & Oates kills it with an encore consisting of “Rich Girl,” “You Make My Dreams Come True,”Kiss on My List,” and “Private Eye.” People are dancing like maniacs as the light changes to that incredible early evening pinkish Brooklyn glow. A weird statue in the shape of a cake that I’ve been confused by all weekend suddenly explodes in fireworks as the guy next to me screams “Hall and Muthaf*cking Oates”! Indeed, sir.