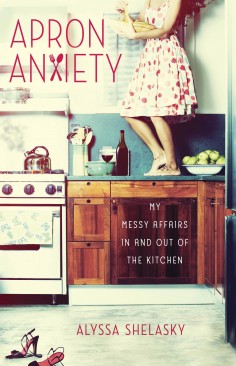 Alyssa Shelasky didn’t start out with an interest in cooking or the kitchen—even today, she says that she was, and still is turned off by “foodies.” She did, however, make her way into the kitchen a fewyears ago she met and fell in love with a contestant on Top Chef; she gave up her job as a People reporter covering the celebrity scene in New York City to move to Washington, D.C. to be with him. But she struggled to adjust to her beau’s hectic work life and the city. Determined to find a sense of purpose, she began to prepare meals by herself, beginning with a macaroni and cheese recipe from an issue of Martha Stewart Living and an arugula salad. From that meal forward, her ability to cook flourished (even if the relationship ultimately, did not) and she discovered the rewards of cooking for herself and for others.

The macaroni and cheese episode is just one of the experiences with food described in Alyssa’s new memoir, Apron Anxiety, which is also the name of her blog. Gossipy ion one hand and poignant on the other, Apron Anxiety describes the joys and heartaches in her romantic relationship with “Chef,” and her journey from the glitzy world of entertainment to the high-brow food scene. But beyond food (the book also features about 30 recipes) and romance, Apron Anxiety is also a story of family bonds and friendship and about overcoming personal obstacles in the kitchen, and in life.

It was great catching up with Alyssa, who is now the New York editor at Grub Street, New York Magazine’s food blog. (Full disclosure: She and I used to colleagues at People). The DUMBO writer spoke to me about what led her to cooking, the Brooklyn food scene, and her favorite recipes from her book.

What were the origins behind the blog Apron Anxiety? This was started during your time in D.C.?
Much like cooking, the blog was basically an act of desperation to find something to do with my life, and to create some purpose every day, so that I didn’t feel so aimless anymore. Cooking wasn’t easy but writing certainly came very naturally to me. So I just started cooking and blogging and it was tons of fun.

How did the idea of turning your experiences in romance and cooking into this book?
For so long, people have said to me, based on my life and stories and breakups, “You have to write a book.” And I always said, “I don’t know what I would write about.” That really happened organically as I continued my relationship with Chef, and my depths of misery grew in D.C., which meant the act of rebuilding my life would be that much greater and that much more challenging and richer. As that was all happening, I knew that the life I was living was filled with a lot of intense emotion and that might be the story that I was meant to tell. 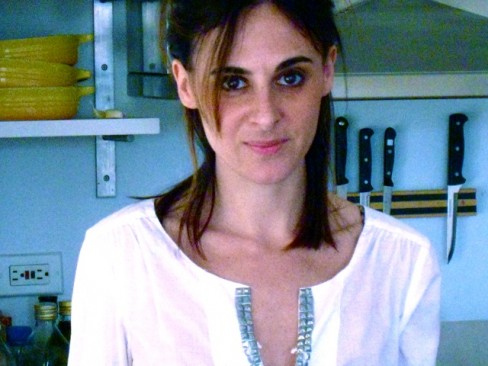 Did you have an interest in cooking early on in your life?
No. I really thought I would be just that girl forever who always just said, “I don’t cook…I have no interest in it.” I was totally comfortable being that girl. I had no clue that cooking could even be a little bit fun or a little bit therapeutic. It was a complete shock then to find out that not only it could be fun and mentally healthy, but that I was actually good at it and it was doable and it wasn’t that big of a deal…all of the positive ways that it would enhance my life. I had no clue what was coming.

You met Chef when you were a reporter at People magazine under the pretense of an interview. That was pretty ballsy.
That was sort of a classic move on my part. I knew that there was risk involved, but I chose not to think about it and I hoped everything worked itself out–and it did. I felt I was really supported by a great group of women at People and I felt this little love story I had inside my head before it even happened would outweigh anything I was doing that was not okay.

It was a fairy-tale romance between you and “Chef” in the beginning, but things changed when you gave up your job at People and then moved to D.C. where he is based. You had a hard time adjusting to life there.
What I hope came through in the book is that I always considered myself a bit of a survivor…there’s nothing that happened to me in my life that I couldn’t handle. And then I was here in a new city…and I experienced such a new level of loneliness and alienation and I couldn’t figure out how to cope with it. Like all stories and relationships, there were many layers—I was with somebody who was so celebrated in that town and that was a new experience for me too. I was sort of in somebody’s shadow. I was with somebody who was extremely involved in the food world where at that point I had nothing to offer or I had no way in participating. I could have just allowed myself to crack or had to figure out how to rebuild. And that’s what I did. But it was a tough time.

Did you see your desire to cook as a way to bring yourself closer to Chef in the relationship?
Definitely. I don’t know if it was because he was a chef or because he’s a man, but he loved when I cooked for him. It impressed him, and that made me feel good. I was a little bit insecure in that relationship and to do things that garnered praise from him and the people around him–of course that made me feel great. It’s so wonderful cooking for someone you love.

I like how you incorporated food in the narrative.
My editor kept saying to me, “This is great and I’m crying, and I have goose bumps, but you have to mention food more in this chapter. It’s a food memoir, Alyssa.” It’s very easy for me to talk about love and loss and family and friendships, but I’m 34, and I only got into food at 31. As they say, we are scared of what we don’t know. There’s still a lot about food I still don’t know…it’s a new world for me and I don’t know if even necessarily belong there. I’m sort of exploring that universe.

As someone who is now part of the food world by covering it for New York Magazine, how would you describe the scene these days?

The food scene is intense. The popular group in the food scene is a tough clique to join and to coexist with…I felt the celebrity scene was actually almost friendlier. There had been food parties where I felt almost had nobody to talk to and then I’ll text my best friend, [and be like] “I’m standing in the corner, get me out of here.” And [the friend] would write back, “You went to the Oscars and you went Brad Pitt’s movie premiere and sat with him. You can do this.” But it’s just so weird because here I am with a bunch of food writers talking about olive trees and it’s intimidating. 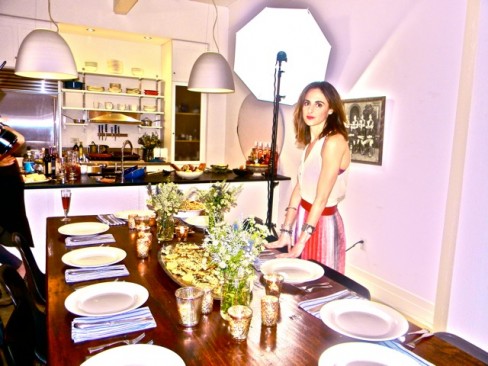 How would you characterize the food scene in Brooklyn?
The Brooklyn food scene is the best. I feel sorry for chefs who, when I talk to chefs and they’re not familiar with Brooklyn and they don’t have plans to open in Brooklyn. You can see a sense of despair in their eyes that they’d wish they got here sooner, wished they were part of the Brooklyn party because it’s definitely where food is happening. I would be fine never hopping on a subway again and just being in Brooklyn. I could spend my whole life only eating in Brooklyn. I don’t think you can become a food writer right now if you’re not familiar with what’s going on in Brooklyn. You would sound absolutely clueless if you’re oblivious to the Brooklyn food scene.

Do you still cook?
If I have a day when there is nothing to do, there’s no way I’m not going to cook or bake something. It’s been a stressful year with everything going on, and as you read in the book, it soothes me to cook. I often times would wake up at 6am just to bake a bread or just to prepare a roast chicken to cook the next day just because I knew that hour in the kitchen with my apron on, sipping a coffee…and set things right inside so I could conquer the day ahead.

Of the many recipes in the book (such as Easy Pizza After a Tough Time, Springtime Tart, Herb-Crusted Chicken for Hungry and Important People), what’s your favorite?
It’s hard to say because they’re all a part of my life. [I would say] “Neiman and Marcus Chocolate Chip Cookies.” I don’t have an emotional connection to those, but those are kick-ass cookies, they’re freaking delicious, and I bake those all the time. The Perfect Shepherd’s Pie—I grew up with a lot of Irish families and that makes me think of Longmeadow [in Massachusetts], where I come from, and who were the truly important people are to me. At this moment, I would say the shepherd’s pie.

A book party will be held for Alyssa Shelasky’s Apron Anxiety on Wednesday May 23 at powerhouseArena, 37 Main Street, Brooklyn, from 6-9pm. To RSVP, email rsvp@powerHouseArena.com.