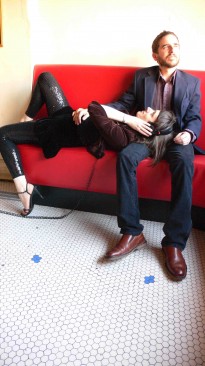 A few years ago, I reported on Australian singer-keyboardist Greta Gertler using Kickstarter to finance her upcoming album, The Universal Thump. Fortunately for the Brooklyn artist and her fans, that fundraising goal was achieved. The Universal Thump (also the name of her band) will come out in the fall.

Greta has been a staple of the New York City music scene and has recorded several terrific pop albums like The Baby That Brought Bad Weather, Nervous Breakthroughs (with Pecadillo) and Edible Restaurant (with the Extroverts). Her melodic compositions recall Tin Pan Alley with a touch of Elton John and Billy Joel.

Recently I caught up with Greta to talk about the inspiration behind “Flora,” one of the songs on the upcoming album,  and the backstory behind the gorgeous video for it, which was filmed in Sunset Park.

This song was based on a true story about a Komodo dragon. Tell me more.
The story of Flora, the Komodo dragon who asexually reproduced in a zoo, was amazing to me on many levels. At the time I read her story in the paper (around 2005-2006), I was at a crossroads in my life, I wasn’t sure if I would ever start a family of my own; I was stuck in a relationship that wasn’t right for me; and I wasn’t writing many songs. As woman who grew up being aware of and appreciative of all of my choices in life, earned through the struggles of feminists before me, I loved the story of a female reproducing on her own–I analyzed it as a story of will and determination to be happy.

This doesn’t necessarily have to apply to creating babies or tiny creatures, but could also be a metaphor for creating art of any kind. Sometimes you get stuck, artistically, in certain situations or patterns, and it’s amazing to know that it’s possible to pull yourself through that situation, and create something new.

We actually recorded the song twice. The first time it had more of a conventional, soul-pop feel–the song was originally written with another singer’s voice in mind. After I played and sang it myself for a while in duo mode, on tour with my partner, Adam D. Gold, it took on a new feel that stays truer to my voice, which is softer. The arrangement we finally went with on the album is very organic. We mainly tracked everything in one day, as a quartet; Adam (drums), myself (piano), Jonathan Maron (bass) and Pete Galub (guitar). Later on, we added percussion tracks and backing vocals by the joyful singer, Lucy Woodward. The trombone solo by J. Walter Hawkes also adds whimsy and blat to the song.

How did you arrive at the concept of the video?
I can’t remember exactly how the stroll-dancing idea for “Flora” popped into my head, but once it got there, I found it difficult to just let it go, and I really wanted to make it happen somehow. It was inspired partly by the opening scenes of the film Hair (directed by Milos Forman), in which the dancers take over Central Park. I see a lot of mothers pushing babies around in strollers, around my neighborhood (Sunset Park) and in nearby Park Slope. I thought it would be fun and entertaining to create a dance routine involving strollers and other baby-apparatus.

At the time I had this idea, my friend Rozz [Nash-Coulon] approached me to offer choreography for a musical that I was working on. So I asked her to choreograph the routines for the video. As she was pregnant with twins at the time, and is also a fantastic theatrical performer (she is a total star), I thought that I had to make her an integral part of the video. And I wanted to weave the story of her pregnancy in with the other plots. Rozz was a major inspiration for this video. She and Branden Poe, the cinematographer, really allowed us to make this video. Adam and I are extremely grateful to both of them, in particular.

We filmed the video in Sunset Park itself–in various locations. One of these is a blue, painted kiddie pool, which I have heard is going to be demolished soon. It was ridiculously fun filming the dance routines all over the park. I love Sunset Park so much, and it was a beautiful fall day. I was also pretty exhausted by the end of the day! Stroll-dancing is tricky.