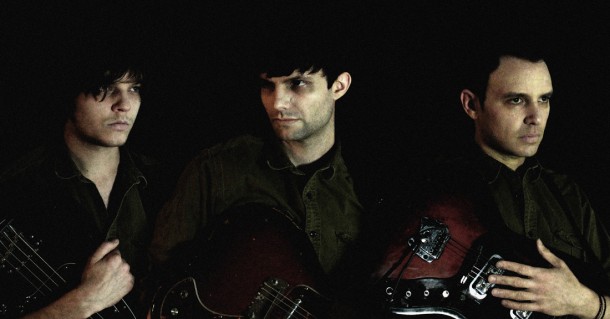 Jorge Elbrecht of Brooklyn indie band Violens would probably admit that putting together an album by himself is a challenge–something that he experienced during work on the band’s previous record, Amoral. He produces and mixes music in his Greenpoint apartment and certain instruments and tracks tend to drive him crazy during the recording process.

Violens’ new album, True, involved a great deal input from fellow Violens members, keyboardist/guitarist Iddo Arad and bassist Myles Matheney. “This time around, we wrote lyrics together, arranged the songs, came up with parts, started songs based on other band members’ ideas and that kind of thing,” says Jorge. “It was a lot less pressure for me because I record the stuff and I mix it myself and it’s just a lot of hours and a lot of hats to wear at the same time. So leaning on the other guys was a lot more enjoyable and I think that came through [in] the recordings a lot.”

True, which just came out on Slumberland Records, is a moody, atmospheric and edgy record, albeit also gorgeous-sounding and melodic. It recalls classic elements of ’80s and ’90s alternative music with some out-of-body vocals and atmospheric guitar. The sound on True also marked a departure from the previous album, according to Jorge.

“The desire with the first record was to really make it jump out of the speaker and be like almost annoyingly bright, hard clipped and really loud,” he says. “For this record…the recordings are softer and not as loud, maybe more mid-rangey. Every record is kind of an experiment and it’s a feeling that you want to have be consistent throughout a group of songs. Amoral was one kind of feeling and this is a different one.”

The album’s first single is the catchy “Totally True,” and the feeling, says Jorge, was drawn from Martin Newell’s band The Cleaners of Venus. “I think was trying to go for those similar kind of textures and feelings and sort of weird, stonewashed, denim color that I hear in his stuff with “Totally True.” That’s probably the departure point for it.”

As far as the song lyrics on True, Jorge says that the band never really cared about connecting the dots. “There are feelings that are underlying that kind of motivate the songs. There’s a song that is not on the record called “Something’s Falling,” and I think that’s probably the one that makes the most sense that tells a story. It’s not usually something that excites us or that we work towards very hard. I think that’s probably the one thing that connects them all–they’re pretty abstract and they’re set in this dream world.”

Violens were formed in 2007 starting from the friendship between Jorge and Iddo–who moved to New York to attend art and law school, respectively. Jorge says he didn’t have designs at being proficient with an instrument but just wanted to play chords and sing songs. “There’s not really much you can go to school for that unless you want to get to the technical side, which at that moment I really wasn’t that interested in that either. The reason I came to New York for art school is because I got kicked out of high school, It was only one of the schools that didn’t ask you if you had been dismissed from school, and it was also a free tuition school called Cooper Union, and that was my way up to the city and struggled to make it happen and luckily it did.”

The band is planning to tour the West Coast as well as abroad in the UK and Japan. Jorge says that on stage, the band performs really hard with aggressive guitar, drumming and bass playing. “Sometimes that doesn’t work for the recordings, you have to play softer for it to hit the microphones right, so it’s definitely a different experience. I think a lot of people like that to sort of [hear] the song that they know of played a little bit more intensely. It will probably morph over time and we’ll probably try different things.”