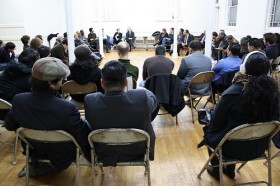 New Kings Democrats, a grassroots political organization formed by a group of young democrats following President Obama’s election, has been pushing for a more progressive Democratic Party and platform in Brooklyn since its members started showing up in droves to County Committee meetings in 2008. County Committee is an elected body of registered democrats that governs the Democratic Party in Brooklyn.

“Although there are over 4,000 [County Committee] seats, typically about 100 people show up at these meetings,” says NKD co-founder Matt Cowherd. “We showed up with 100 of our own people who wanted to participate and make the meeting something other than a scripted performance. We actually wanted to deliberate, participate and get involved. That really transformed the dynamic in a way that will have an impact.”

At the very least it made Committee members aware of a new generation of willing-and-able Democrats waiting in the wings. Getting people’s attention isn’t enough to provoke real change though, which is why, with County Committee elections taking place again in the fall, NKD is actively encouraging all Brooklynites to consider campaigning for a seat. NKD has organized a training session tonight at K&M bar in Williamsburg from 6:30–8:30pm, to help the uninitiated understand the County Committee elections, and encourage an influx of new committee members this year. 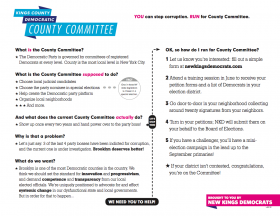 Participating in politics is not cheap–just ask John Edwards–but those who fear their pockets aren’t deep enough for such an endeavor should fear not. It turns out campaigning for County Committee doesn’t require friends in high places or $14,000-a-plate dinners. You just need to be registered Democrat at your current address and then about 20 signatures from your neighbors to get your name on the ballot. NKD will pass out lists of Democrats in your election district at the training sessions to make going door-to-door getting to know your neighbors a little easier. They will also turn in your petitions to the Board of Elections. “There are a hundred ways your petition could be rejected,” Cowherd says, though he assures NKD is adept at navigating the bureaucratic red tape. The bigger issue is getting people involved. 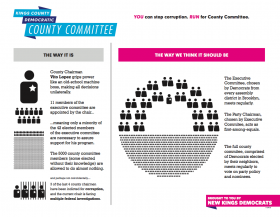 “I come across a lot of people who understandably think government is corrupt and it doesn’t matter,” Cowherd says. “I’ve started to push back on that a little bit and tell people that our elected officials are only as corrupt as we let them be, and by not participating in the process and taking ownership of it by getting involved, they’re actually a big part of the problem, and that’s actually why we’re at where we’re at.”