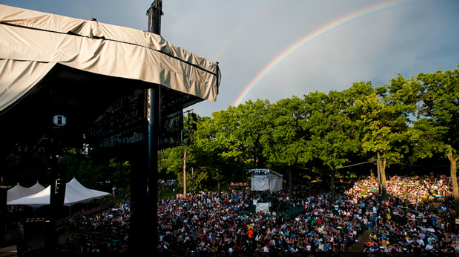 Here’s a collection of some of my favorite songs from artists who will be playing Celebrate Brooklyn! this year. Though some bands were originally more familiar to me than others, there’s something here for everyone, like the Celebrate Brooklyn 2012 lineup itself. The Spotify playlist is arranged by scheduled performance date, first to last, so you can move through the songs in the same order that you’d move through the festival, and get pumped for all the incredible acts that will be coming to the bandshell this summer. Enjoy! 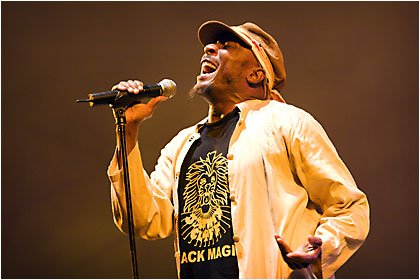 Jimmy Cliff, “You Can Get It If You Really Want”
Struggling writer? Starving artist? Just trying to hold it together in the land where you’re not only supposed to live your dream, but get it artisanally pickled too? Man I know—it can be rough out there. Luckily, so does Jimmy Cliff. That’s why he made this catchy, upbeat song for you, complete with sunny trumpets and an inspirational/never-grating refrain. Who can stay downhearted when there’s reggae in the sunshine, or tonight’s possible rain?

Laura Marling, “Rambling Man”
Both melancholic and triumphant, the quietest moments of “Rambling Man” deliver its most devastating lines (especially, “It’s funny how the first chords you come to / are the minor notes that come to serenade you”), only to be rejoined with a chorus that is so resounding, it makes us want to go find a rambling man of our own.

Esperanza Spalding,“Cinnamon Tree”
Instead of featuring one of Geri Allen’s original songs, or even one of the standards she’s famous for (though just between us, ‘Take the A Train’ is the jazzy knee of every bee), I chose the recently Grammy-garlanded Esperanza Spalding’s “Cinnamon Tree”. For what purpose? Because it’s a tall drink of cool, sweet tea, the perfect Sunday afternoon, and the breeziest summer breeze (bearing just the hint of spice) all rolled into one. Know why else? I secretly hope they play it. Together.

Keb’ Mo’, “Am I Wrong?”
In ‘Am I Wrong?’ Keb’ Mo’ asks the questions you have when you’re in a bad relationship and know it, but will never ask to risk proving it once and for all. Despite it’s traditional blues-iness, there’s a blistering sass to ‘Am I Wrong?’ that as member to the wronged party, makes you think ‘hey, this joke’s on you, baby”. Keep listening and you’ll realize that nope, just like you and Keb’ Mo’ knew all along, the joke is always, always on us. Factor in a guitar riff that has more heat and stank on it than an L train during rush hour in July, and you have one great song about the realities of invulnerability—acting like you are, and knowing that you’re not.

Ghostface Killah, “Back Like That”
One of the less explored areas of the messy love triangle is the unsought relationship you now have with your significant other’s other significant other. In “Back Like That” Ghostface performs one of the subject’s best smack-downs, showcasing the lyrical prowess and wordsmithery that helped distinguish him from the other members of the Wu Tang Clan. The unwelcome connection shared by two suitors (even when one is no longer interested and has since ‘moved on’) has its own palpable intimacy, with or without the main player. When Ghostface sneers how “In the summertime”, he “had to do it … / quick, old fashioned / in the back of the mall”, it’s clear that ‘it’ is a beat down on his lady’s new dude… but it could just as well have been hitting of another kind on his former lady. A chorus of harmonized cooing Ooo’s, a sample of a sweet 70’s piano trill, and a refrain from Ne-Yo so catchy that you’ll be singing it for days, and your new summer romance just rolled up—and he ain’t having none of this ish.

Dirty Projectors, “No Intention”
Sometimes you like a song because it connects to something deep within you—your emotions, your experiences, your hidden secret self. Sometimes you like a song because it blends seamlessly with your aesthetic sensibilities and musical tastes. You know why you’re going to like “No Intention”? Because it’s cool, simple as that. This song is one bad-ass James Dean lookin’ mother, and you’re lucky enough to be along for the ride.

Hot Chip, “Wrestlers”
Other than containing one of the greatest and cleverest line permutations in dancepop for at least the past ten years (certainly the best that ever referenced Willie Nelson), ‘Wrestlers’ takes an often pertinent if not often thought-of metaphor for love and relationships, and extends it to three plus minutes, where each beat, note and reference hits harder than you think it would on paper—in the heart, the funny bone, and of course, the gut.

Wilco, “You and I”
This is not just one of our favorite Wilco love songs—it’s one of our favorite love songs, period. “You and I” is an exceptional song the way a tsunami is an exceptional wave—there’s little to distinguish it from its brethren other than the devastation it leaves in its wake. Simple, sincere, and direct, it forgoes embellishment and instead goes right for the emotional jugular.

Wilco plays with Lee Fields and the Expressions July 23 and The Lee Ranaldo Band (of Sonic Youth) July 24.

Seattle six-piece The Head and the Heart play July 27 with orchestral folk band Lost in the Trees.

Sigur Rós, “Gobbledigook”
No one really knows what the exact lyrics of any Sigur Rós song are—Jonsi and Co literally invented a language to make sure of it. Why? Maybe to prove that complete understanding really is unimportant to complete enjoyment. Or maybe because Sigur Ros has that rarest of traits among serious musicians: a sense of humor about their music. If the aptly titled ‘Gobbledigook’ is any indication, I’d say both.

Wild Flag, “Something Came Over Me”
Thought if I was covering Wild Flag, that I’d go for “Romance” or at least “Future Crimes”? Nope. I went with “Something Came Over Me.” Because not only is it my everlasting ambition to be someone who feels ‘faint but never weak’ in love, but because seriously, can you think of a better pairing than those bittersweet chords surging beneath a chorus that demands, ‘let the good times toll’?

Yo La Tengo, “You Can Have It All”
Any song that can repeat variations of the same three lines over and over again (and even that’s stretching it, since two of those lines are only repeated twice, and the other—the title, for Pete’s Dragon’s sake—is roughly 90 percent of the song) without making its listeners drill a hole in their heads is a feat of true music mastery. Throw some ‘bump-ba-bumps’ in there, and you have a song that’s the perfect accompaniment to any pleasurable summer activity, from enjoying a few cold ones with friends to holding hands while watching the sun set from Brooklyn Bridge Park. And just try walking down the street while listening to it and not smiling—I dare you.

Yo La Tengo performs alongside M. Ward in the last benefit show of the season, August 7.