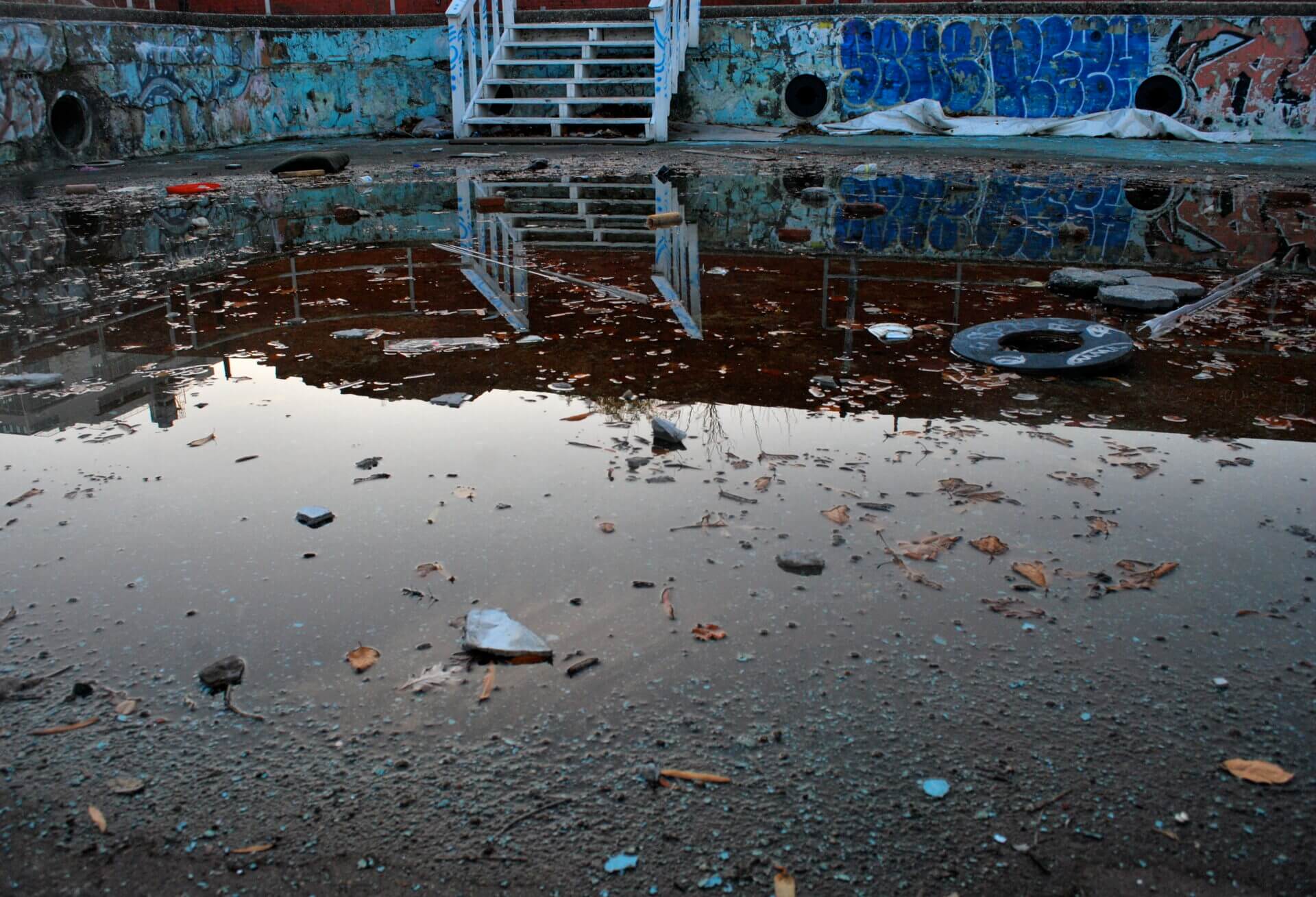 The McCarren Park Pool, strewn with debris and covered in graffiti in 2009.

The entry arch of the McCarren Park Pool is a historic feature to be preserved in the $50 million renovation.

The renovation project aims to resurrect the facility from more than 20 years of neglect.

Cracked paint and split concrete lined the inside of the pool in 2009.

In some areas, rust had completely eaten away at metal beams.

Debris and leaves nearly covered the steps completely in 2009.

When photographer Gina Pollack hopped over the construction fence of the McCarren Park Pool in 2009, camera in hand, she captured images of a public space that had been neglected for over 20 years.

Pollack’s photographic series Where they swam // other relics will open June 8 at The One Well boutique and gallery in Greenpoint.  It documents the pool’s decay from the time it closed in 1984, after almost 50 years in operation, to just after the beginning of a renovation project that began in 2008 (it’s scheduled to re-open to the public on June 28).  Pollack’s images will appear alongside photographs from Alaska and the streets of Israel—places that she says are, like McCarren Pool, in flux because of external forces.

“The images capture sacred spaces, preserved in an instant of time that is at once still, real, and already gone,” Pollack wrote in an email.

Built as part of a Work Progress Administration project at the end of the Great Depression, McCarren was one of 11 public pools added around the city.  It cooled Williamsburg and Greenpoint residents during one of the hottest summers on record–the year of its completion in 1936–and remained a popular summertime hub until it was closed in 1984.  By that point the facility had fallen into disrepair, and it sat unused for 20 years thanks to a dearth of city funds and disagreement among neighborhood groups about how best to resurrect it.  In 2005 it came back to life as a makeshift music venue, remaining so until it was closed in 2008 so that renovations could finally begin.

The $50 million renovation is to be completed by June 28.  It preserves the historic bathhouse building and entry arch, and fully updates the swimming pool and recreation center.  Amenities in the latter are to include a volleyball court, spray showers, a basketball court, weight room, dance studio, cardio room and a “multi-purpose community space.”  The facility is to be used year-round, with an ice skating rink on the pool deck in the winter.