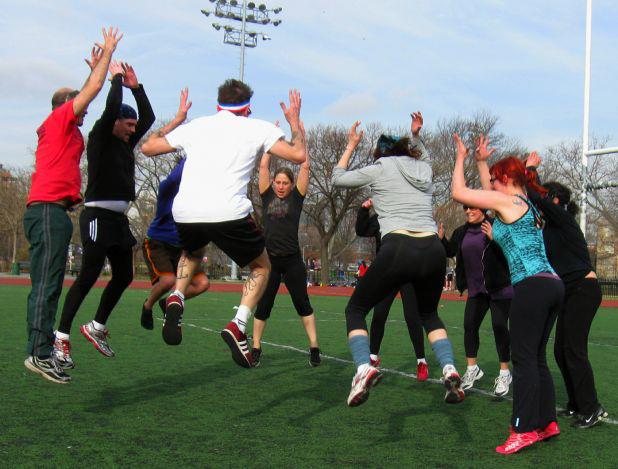 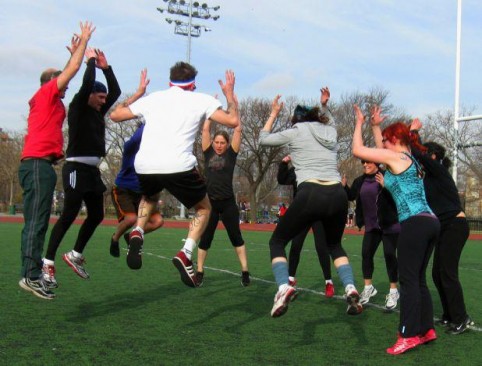 Update: I just found out that there’s a pay-what-you-wish Beastanetics class in McCarren Park, by the track/soccer field, closer to Driggs on Saturday at 10am. Go try it out and see how awesome it is!

Despite the fact that I played sports all through childhood and high school (field hockey, ski team, swim team, some light track and field) I was never really a joiner. I’m deeply uncomfortable with the vaguely nationalistic rah-rah of most team sports and I actually suffer from a certain degree of sports Aspergers–when we’d lose a field hockey match (we always lost) other girls would be crying and I’d  be like, “No seriously, is there a single real world consequence to what just happened on the field?” The thing is, I’m fairly athletic, I’m just not really good at playing games. I’m not QB material–I definitely don’t see the spread after the snap.

So when it comes to working out, I’ve always suffered from a sort of dilemma: the treadmill-eliptical-stairmaster grind is so boring it makes me want to die. Of obesity. On the couch. Wearing a very large Fuck the Gym t-shirt. I like yoga, but I also like to move and get sweaty and not because the room is 110 degrees. I want yoga to be a mellow happy place, not a sweaty, competitive nightmare. Also, I want to work out outside, and I hate running just for running’s sake. I like riding my bike, but I don’t want to turn that into a thing where I own a lot of spandex and tell people to watch their line as I speed past like a real jerk. Adults who play on a basketball or soccer with friends always seemed so lucky to me–you can get some exercise and socialize at the same time. That’s just not for me. So I dutifully went to interval training classes and Zumba classes at the gym (okay, confession, I totally love Zumba and its goofy good times) until I discovered Beastanetics. 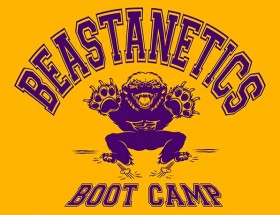 What the fuck is Beastanetics? Well I’ll tell you. It’s a twice-weekly  workout in McCarren Park that will kick your ass and leave you wanting more. Tim Haft, who created Beastanetics and Punk Rope, is this mad fitness genius who somehow creates a fun but serious environment that is tough but not intimidating. You work really, really hard at each session, and you compete with other Beasts, but in a way that just makes you push yourself harder, not in a “who’s the richest investment banker on the field today” gross way.

What do you actually do? First you warm up. Then you might do some pushups. Beastanetics is based on body weight exercises so the only thing your lift or move is your own body. The main workout is a series of six exercises, each repeated four times. Intervals are 20 seconds long. Then you get a 20 second break…the first week. The break shortens each week until you’re down to 12 seconds. The moves include jumps, skips, sprints and other calisthenics. The whole thing is based on this Japanese fitness program called the Tabata protocol that advocates for super short, super intense bursts of activity. After the intervals, you do some upper body and core work, then stretch it out. Then you go home and wonder whether you’ll die. It’s hard, but it also makes you feel really tough.

Here’s the thing about Beastanetics: It’s an awesome group of people. One day a fellow Beast who is a music writer showed up to McCarren wearing a t-shirt with a line drawing of Henry Rollins giving Glenn Danzig a backrub on it. These are your classmates. There’s just a friendly, mellow tone throughout. Tim is beyond encouraging. Beasts go see each others’ bands and art show and get coffee after class together. People say hello and ask about your week. They offer each other advice about choosing an accountant and share apartment hunting leads. It’s a cool community to be part of.

I know this sounds like an advertorial, but I just want all you picky athletes out there to connect with something that has totally changed the way I feel about working out and made me feel totally stoked about all the cool shit my body can do. The next session of Beastanetics starts next week, with classes at 6:45am, 8am and 9am on the McCarren Park soccer field on Tuesdays and Thursdays. And finally, yes, the Beastanetics mascot is a honey badger. What else do you want?

Leave a Reply to Jack_demolay