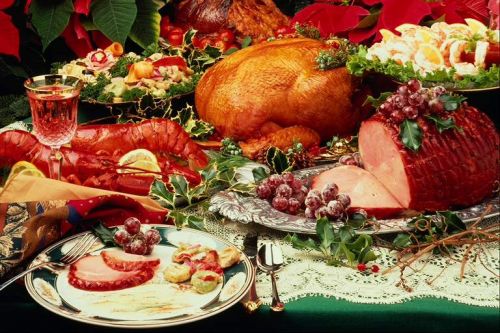 My mother-in-law is legendary for making obscene quantities of food for any meal. We’re not just talking holidays here — she will serve up two appetizers, a salad, a main course, five side dishes, and three desserts…on a regular Sunday night…for four people. Three desserts, Dot! Like, two cakes and a pie!

This is not my problem, though. The problem is that her son, my husband, now has similar leanings when we have friends over for dinner. Where I was raised (the Midwest), it was enough to serve some nuts or something before dinner, and then have a salad, a main course, two sides, some bread and a dessert. He tries to act like this is cheaping out and that we’re terrible hosts if we don’t serve enough food to feed a village. I think it’s just ridiculous (not to mention wasteful and expensive), and I’m confident our friends would be happy with a simple, reasonably portioned, well-prepared meal that doesn’t require elastic pants or shopping bags full of leftovers. We go through this every time we have people over, and he usually wins out. But how can I convince him that “entertaining” doesn’t mean we have to kill ourselves making 20 dishes for four people?

The part of me that feels like it’s rude to turn down anything my dinner host or hostess has prepared is kind of terrified by the prospect of an invitation to your mother-in-law’s. I have certainly been known to pack it away, but I agree that three servings of dessert at one sitting on a Sunday night is a bit much, thank you. Monday mornings are bad enough as it is without feeling like you’re coming down off a pixie stick bender. I think that your relatively modest notion of an ideal dinner party menu idea is perfectly reasonable, and probably more in line with most guests’ expectations than your husband’s (or his mom’s). That said, I am beginning to realize that the general entertaining philosophy that a person picks up from his or her parents dies really hard (unlike, say, the general fashion philosophy or the general keeping up with modern innovations in technology philosophy).

I, for one, grew up in a household where a dinner party meant a plate of different kinds of cheese and fancy crackers, and I spend more money at Murray’s or Stinky Bklyn every time I have people over than I do on the rest of the meal and booze combined. If I hadn’t been so irrationally wedded to the concept of a cheese plate, I might have been able to avoid serving Camembert at a bbq on a particularly sweltering day last summer. (Just FYI, most people aren’t reaching for dairy when it’s 98 degrees out, and if they are they probably don’t want it to smell like rhinoceros feet.) If your husband was raised to feel that serving the amount of food that it would actually be appropriate to eat without installing a vomitorium room in your apartment makes him look cheap, it is understandable that he wants to overload  your dinner guests’ plates. But that doesn’t mean that YOU have to join him in going above and beyond the normal call. Simply tell him beforehand what you are planning to serve, and indicate that he is more than welcome to supplement it with any additional food that he deems necessary. Maybe if he is responsible for the extra work and expense required to produce the Great GoogaMooga in your house every weekend, he will learn to pare down a little. If not, you didn’t kill yourself AND you’ve got leftovers for the rest of the week.

Got a question for Dot? Submit it here or tweet her @Dear_Dot: