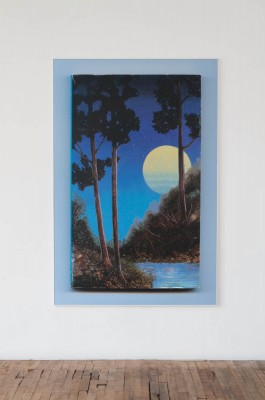 Last weekend, Bushwick natives had their turn to jostle for the spotlight in this crowded season of New York art fairs. Now in its sixth year, Bushwick Open Studios 2012 offered a panorama of art, with over 500 shows stretching from Myrtle to Metropolitan.

Such quantity could overwhelm even the most ardent of art devotees, but at certain hubs like 56 Bogart Street, studio-goers could meander the hallways at a more digestible scale. The building hosts four floors of galleries and studios, turning what was once a house of industrial manufacturing into one of creative commerce.

The artists’ open doors yielded sights that ranged from astounding to chimerical. There were Seung Mo Park’s fantastic hanging sculptures in which black metal mesh became the makings for trompe l’oeil portraiture. A few floors above, Kyu Seok Oh’s plump papier-mâché sheep tranquilly grazed the nail-ridden floor. And lest us not forget the grey-wigged granny that flanked the building’s entrance, who jovially offered her lap to sway your troubles away.

Much of the work found in the first floor galleries seemed to intermingle effortlessly, with two shows in particular (both up until the end of June) neighboring especially well. First, a concisely installed group show at Studio 10 of work that circulates around ideas of “text,” and second, a solo show of Justin Berry’s digitally-altered photographs at Interstate Projects. 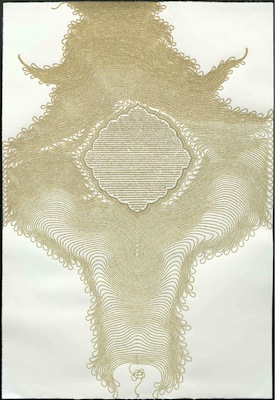 Studio 10’s exhibition, “Text,” is a concise installation of four artists (John Avelluto, Mary Carlson, Meg Hitchcock, Audra Wolowiec), showing art made of wood, ceramics, foam, and the paper of holy books. Meg Hitchcock, whose works employ the latter to beautifully intricate extremes, invite the closest and most enrapturing of study. In Throne (2012), the artist has cut-up an English translation of the Koran—letter by letter—and reassembled each sliver into the tale of Revelations, the final and most fanatical chapter of the Christian Bible. The words unravel in the eye without punctuation or reprieve, forming lines of text that twirl and kiss like perfectly un-spun yarn on a page. The stun her work delivers resonates beyond its visual delicacy, and echoes into realms both intellectual and spiritual.

Just down the hall at Interstate Projects, Justin Berry’s show “Fissure and Facture” similarly attempts to edit mythologies, albiet ones visual rather than religious.  In making his photographs, Berry has scanned landscapes from the covers of romance novels and popular video games, and then digitally erased all evidence of the text and characters that once inhabited the image. In the blown-up print Brook (2012), what remains after the artist’s intervention is a turquoise-drenched lagoon in which dusk sets with red, yellow and cyan printer dots. Blown out of scale, Berry gives us the island fantasy of our vintage dreams in all its low-fi glory.

Studio 10 and Interstate Projects are both at 56 Bogart Street at Harrison Place, just off the Morgan Ave. stop on the L.