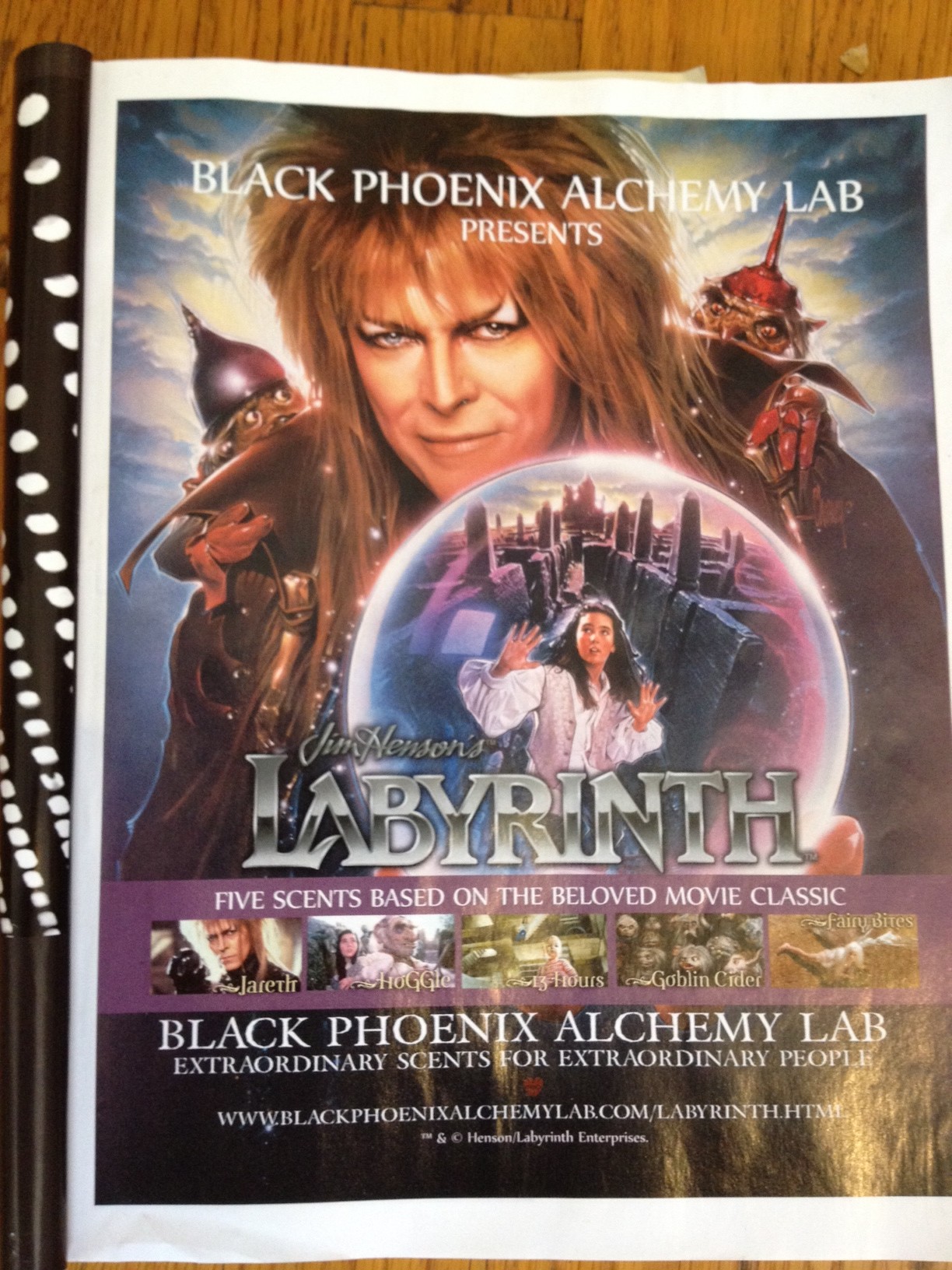 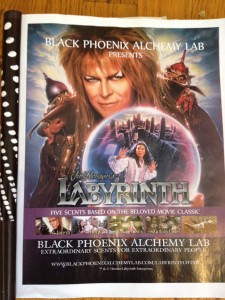 “Have you seen this crazy shit?”

A few days ago my sister asked me that question while handing me a magazine, curled open to a full-page ad prominently featuring Jareth, the vaguely rapey goblin king, from the movie Labyrinth. I assumed that maybe there was a new Broadway musical based on the film, starring Justin Bieber in place of David Bowie. Or a re-release of the original on DVD. Or maybe you could buy a Labyrinth black light poster for $19.95 plus shipping.

I really, really did not anticipate that anyone would ever create a line of perfumes based on a movie about a goblin king who tries to get into a teenager’s pants by stealing a baby.

I’ve written about my fascination with and special relationship to Labyrinth here before–basically, my former stepmother strongly resembles Jareth (it’s the eyebrows and hair), which is part of the reason my sister and I both take a special interest in all things related to the movie. But getting back to the scents of the labyrinth.

There are five perfume oil blends in the Labyrinth Collection from Black Pheonix Alchemy Lab, and boy are they even weirder than you would think “scents based on Jim Henson’s Labyrinth film” could ever be. The first, 13 Hours, is described as “A scent of profound foreboding: dusty black stone, dried rosehips, black moss, and creeping ivy.” Ok, sure. I can almost picture it as a dark-Cinderella style Dior fragrance. Almost.

Next up is Fairy Bites, which includes notes of honeysuckle, thyme, bergamot, and something called Dracula orchid. Yup, adults who are still enough into a movie populated by puppet versions of goblins, fairies and magical beasts would definitely shell out $26 for 5ml of something called Fairy Bites. Well done.

Things start to go off the rails a bit with Goblin Cider. It just sounds like a tea you’d drink while wearing Fairy Bites, not a scent itself. But the last two scents are by far the weirdest and both based on characters from the movie: Hoggle and Jareth. Now, you may have seen the Jareth scent coming. There are definitely creeps out there who want to smell like a goblin king, or like David Bowie, or like magic. But Hoggle? If you don’t remember, or never saw Labyrinth, let me bring you up to speed. Hoggle is the curmudgeonly muppet who begrudgingly leads Jennifer Connelly through the maze toward the castle where Jareth has the baby. He’s like a craggy homunculus hobo and the thought of smelling like him goes could definitely be described as gross. According to the Black Pheonix website, the scent is consists of “fermented pumpkin, brown leather, dust, tobacco leaf, and dark woods.” So he’s the guy who camps out in the woods with a stash of Drum and a pile of rotting pumpkins? That’s like, side effect of being a hobo, not a a way someone would strive to smell.

You’ve gotta love the description of the Jareth scent though: “ethereal lilac fougere and gleaming leather with ti leaf, tonka absolute, white musk, and oudh.” (I googled oudh and apparently it’s a common note in perfumes that lends depth and smokiness. Neat.) I LOVE that they make sure to note that it’s gleaming leather that this smells like, which is some serious synesthesia–I mean, can you smell something gleam? If you can, it’s well worth the $26, not to mention the weirdo cred you’d get for sporting Jareth, the perfume.

There’s something about these scents that go so far beyond the lameness of adults wearing wizard robes to a Harry Potter movie (especially when unaccompanied by a child) or being on Team Edward or Team whatever the werewolf’s name is that in fact, I think dabbing a little Jareth behind your ears might come back around to being so out there, it’s actually cool.