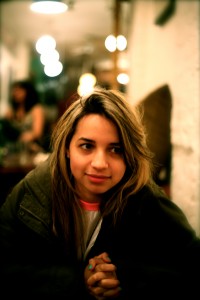 I came across Lauren Gomez Sunday evening on her way home from the market cradling a papaya the size of a newborn baby in her arms. Having never tried the tropical fruit myself (and being only mildly concerned about its origins given its size), when she offered to cut it open, I took her up on her offer and asked her about her weekend afterward. Lauren spends six days a week splitting her time between DODGE Gallery on the Lower East Side, where she’s an assistant, and Cloak & Dagger, the chic boutique in Boerum Hill with a second spot in the East Village. Despite  working on the weekend, she still managed to fill the past three days with the types of serendipitous experiences that make New York seem cinematic at times–Annie Hall homage included.

FRIDAY: I was at the gallery working. At lunch I passed by another gallery, Eleven Rivington, to say hi to my friend Todd. It was his birthday. Three days before that, we’d been talking about flowers–I don’t know why. Todd was talking about how much he liked roses, and I made the claim that they were the least interesting flower you could choose for someone. He made the argument that if you got a rose from the right person, they would always serve as a beautiful gesture, so I brought him some roses.

After work I went to Erica Weiner, the shop in NoLita, to pick up this necklace that’s part of a vintage stock called Sweetheart Necklaces. I’d had it engraved, and it was one of the last ones they had that could be engraved because they’d ran out of hearts. All the others have these rap lyrics from the 90s, like LL Cool J, Busta Rhymes, Biggie, everyone. Some are funny and some are super random, but none of them were for me. Mine just says “la-di-da” because I love that moment in Annie Hall. I always find myself using that phrase. There are always these moments in New York that are either really idyllic and dreamy or totally ridiculous, and I feel like that phrase can be used for either.

So I picked up my necklace, and met up with my friend Gabby. There was this man hooting and hollering at us on the street. He was drunk and with his friend, but it was funny because I had gone full circle with this man essentially. At the beginning of the day, on my way to the gallery, he was doing the same thing, and he didn’t recognize it was me. I’d had a full day, and he was still doing the same thing in two totally different locations. Gabby and I grew up in Miami together, so it was nice to catch up. We meandered about, got burritos at Benny’s and went to this birthday party in Bushwick. Todd and his roommates have a house with a backyard, so it was nice. I walked in thinking I wouldn’t know a single soul except for my friend, but New York is a suburb is what I’m learning if you’re in a creative industry. I hung around and flirted with this boy, who randomly owns a photo-booth rental company, then we left, and I visited a friend that works at Walter’s, and that was that.

SATURDAY: I went to work again–this time at the store in the East Village. When I was at work, I was contacted by a friend of mine, who asked if I wanted to babysit. I’d gone to bed at 5am the night before, so I was ready to get home and sleep, but she said I’d be babysitting for Richard Rogers, the architect who designed the Pompidou Centre in Paris and the Millenium Dome for the Olympics. Turns out, Richard Rogers has a son named Roo Rogers, who’s also in the creative industry. The job was actually for him. They have this gorgeous apartment with an Ellsworth Kelly print on the wall surrounded by children’s drawings and an amazing view of the river. It was so sweet. They were lovely people. On my way home, I swung by Walter’s again.

SUNDAY: Today I tried to wake up at 10am, but that didn’t work, so I tried to wake up and noon, but that didn’t work, so I woke up at two in the afternoon. It was awesome. I had a pizza for breakfast and watched Mad Men in my apartment. I haven’t had Sundays off in so long. You need one day to yourself, and that’s what my self wanted. Later, I went down and bought some groceries. Managed to catch some of the daylight. Now I’m on my way home and eat Tuna Nicoise with my roommate and watch a movie.

RATING: 9–It was the perfect balance. I partied, but I worked a lot, so I didn’t feel bad about buying wine today. Two bottles, not one.