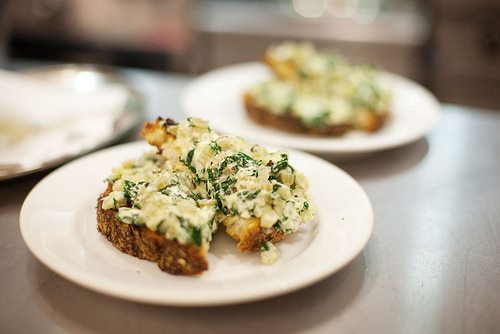 This week I finally got a chance to stop by Allswell, the gastropub-y Williamburg spot helmed by Spotted Pig alum Nate Smith. I had enjoyed Smith’s amped-up pub grub at Prospect Heights’ Dean Street (before he left the restaurant after just a few weeks)  so was excited to see what he’s up to now on Bedford Ave., where Allswell opened late last year.

Allswell’s menu changes at least a little bit every day, with full updates posted to the restaurant’s tumblr page each afternoon. Like nearly everywhere in Brooklyn these days, dinner starts with housemade ricotta, served here on “chili bread,” crusty slices of boule with hot peppers baked into the mix. I’m still not on board with this whole trend where bread isn’t free anymore, but alas, it seems I have lost that fight, and this is one bread-and-cheese plate that I’d say is worth the $6. (Tip: when we asked for just bread later to soak up our soup, the waiter seemed a little confused, but ultimately provided us with a few slices of gratis chili bread. Score.) New on their starter menu this week, Allswell wins my prize for best yet use of the greenmarket buy of the moment: scapes. Here, the long, curly strips of green garlic are kept whole and fried tempura style, with just a little bit of light breading. The resulting salty fried strips are a little unwieldy to pick up and eat, but also tender and delicious.

They also ace that other must-have Brooklyn menu item: beet salad. While it is starting to seem ridiculous that this is on every single new restaurant menu in Brooklyn, I think Allswell’s is actually the best version I’ve had yet. Both purple beets and baby red beets are served over a base of farro spiked with toasted almonds and slivers of chicory, plus tiny little dabs of creamy robiola cheese sprinkled throughout, so that every bite has the proper mix of hearty, fresh and salty.

Interestingly, while all but one of Allswell’s larger plates are meat-and-seafood-based, I found these less tasty that their veggie options. I obviously had to order the crazy-sounding roasted pork sirloin with confit of smooth shark, but I found the dish weird in just a weird way, not an exciting one. Extremely thin, almost-all-fatty slices of pork are topped with nuggets of white shark meat; both have an odd texture, neither one was pleasing. Still, gotta give them effort points for serving shark on pork.

It’s hard these days to find dishes in Brooklyn that strike a new chord, and Allswell does a good job of mixing up the menu between those often-seen new American standbys mentioned above, and more creative items like the shark-on-pork, and, for dessert, gin-soaked bluberries (yes, they actually taste like gin) served with black raspberries and cream on a shortcake.

Some hits, some misses–but overall, definitely a worthy addition to Bedford Ave’s increasingly sophisticated grub scene. I’m excited to see what Allswell does with their daily menu as more summer vegetables come online.