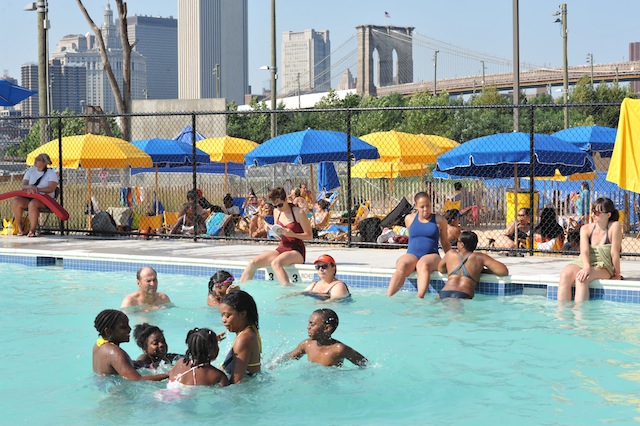 If you haven’t yet visited an outdoor pool in Brooklyn, it’s about time to jump in. The outdoor pool season begins on June 27 and continues through Labor Day on September 1. These are the larger pools around Brooklyn–if we missed a mid-sized gem in your neighborhood, leave it in the comments (or don’t, if you want to keep it all for yourself). And, check out our small person-centric round up of wading pools and swimming lessons.

But be forewarned: the rules can be a bit of a shock. All pools are open daily from 11am to 7pm, but they close between 3 and 4 for cleaning, so if you come at 2:45 they won’t let you in. (Another hint: don’t go right when the pool opens; you’ll avoid lines.) Also, you need to bring your own lock–combination or key–to lock up everything you can’t bring poolside. The only things permitted on the pool deck are a towel, sunscreen, a water bottle, books or bound periodicals (such as magazines) and rubber flip-flops or water shoes. No newspapers or electronic equipment–including cell phones–are allowed. If you want to wear a t-shirt over your bathing suit, it must be plain white. Once you get these basics down, ignore the state of the locker rooms (or hit up the totally revamped McCarren Park Pool) and enjoy swimming in cool, clean waters for free.

UPDATED: This post was originally published in June, 2012, but we’ve updated it for the 2019 swim season.

McCarren Park Pool
Lorimer, Bayard and Leonard Streets, entrance on Lorimer, 718-218-2380. Adult lap swim, M-F 7am-8:30am and 7pm-8:30pm
The enormous McCarren Park Pool, with a 37,571 square-foot basin that has a capacity of 1,500 swimmers, reopened to the public in June of 2012. Shuttered since 1984 and having undergone a $50 million renovation project, the pool and its historic bathhouse are welcome additions to the Brooklyn pool scene, despite all the drama surrounding it.

Sol Goldman Pool at the Red Hook Recreation Center
Red Hook, Bay and Henry Streets, entrance on Bay, 718-722-3211. Adult lap swim, M-F 7am-8:30am and 7pm-8:30pm
Maybe it’s the bright, primary colors in the kids’ water park, pictured at top, but there is something really cheery about the Red Hook pool (built in 1936 with WPA funding and later renamed Sol Goldman in honor of the family’s contributions). It’s big, it’s clean, it’s not super crowded with kids or cool kids, it’s friendly, and if you go on a weekend you can get tacos at the ball fields after your swim.

Sunset Park
7th Ave. and 43rd Street, entrance on 7th Ave., 718-972-2135. Adult lap swim, M-F 7am-8:30am and 7pm-8:30pm
The line that gathers in the morning and late afternoon to get into this WPA-era pool is the typical Sunset Park mishmash of young couples, older folks, a smattering of teens, and plenty of thrilled kids chattering in three or four different languages. But even with kids bobbing around in the Olympic-sized pool, there’s plenty of room. There’s also a large wading pool for toddlers, and a program called Adapted Aquatics, free exercise therapy and swim instruction for individuals with disabilities. For more information, call 718-760-6969, extension 0.

Kosciuszko Pool
Bed-Stuy, 670 Marcy Ave., entrance on DeKalb, 718-622-5271
This pool has seen better days—like the 70s, when this picture was taken and all of the pool’s facilities were being used. But despite an uptick in swimmers in the last few years, it’s still relatively uncrowded, especially the last third of the Olympic-sized pool. We can’t decipher the reason why this pool is named after the Polish general who built West Point; a better name might be Morris Lapidus, the Bed-Stuy native who designed this pool and hotel pools like Miami’s Fountainbleu.

Double D Pool
Gowanus, Douglass and Nevins Street, entrance on Douglass, 718-625-3268
Despite being in a semi-industrial section of Gowanus, the Double D pool (so named because it’s between Degraw and Douglass Streets on Third Avenue) is clean and well-maintained. Because of its almost secret location it tends not to be very crowded, even though it’s not Olympic-sized. In fact, it is in a perpetual state of almost being shut down for various reasons-—funding, and more recently, environmental cleanup work on the canal. So take advantage while it’s open. There is also a separate kiddie pool for parents who want to keep their babies or toddlers clear of flailing swimmers’ arms.

Commodore Barry Pool
Wallabout/Navy Yard, Flushing Ave. and N. Elliot, entrance on N. Elliot, 718-243-2593
A little like the Double D, the Commodore Barry is small (only three feet deep), has a wading pool for toddlers and is in an out-of-the-way place between the BQE and the Navy Yard. So, it’s rarely crowded, except when it opens in the morning. Just remember “the rules”–the staff here has a low tolerance for folks who try to bend them. Perhaps their authoritarian tendencies are inspired by the pool’s namesake, Commodore Barry, an Irish sailor who helped found the Navy Yard. 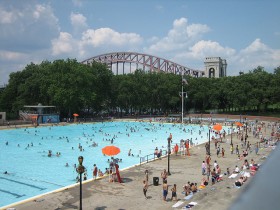 Okay so it isn’t in Brooklyn, but no public pool list is quite complete without mention of this mammoth swimming hole. Constructed in the summer of 1936, it is one of the oldest and largest public pools in the city, with a capacity of 2,178 swimmers. The pool sits on a scenic spot alongside the East River with magnificent views of the Triborough and Hell Gate Bridges. It was landmarked in 2006 along with the Orchard Beach Bathhouse and Promenade in the Bronx, with the Landmarks Preservation Committee citing the “superb design, setting and scale” as the reasons for its designation. That said, our one visit a few years back has kept us away ever since–the staff ferried visitors into the locker room, then the showers, and out to the pools with a ferocity unparalleled to any other pool we visited. If you’ve had a better experience, let us know.