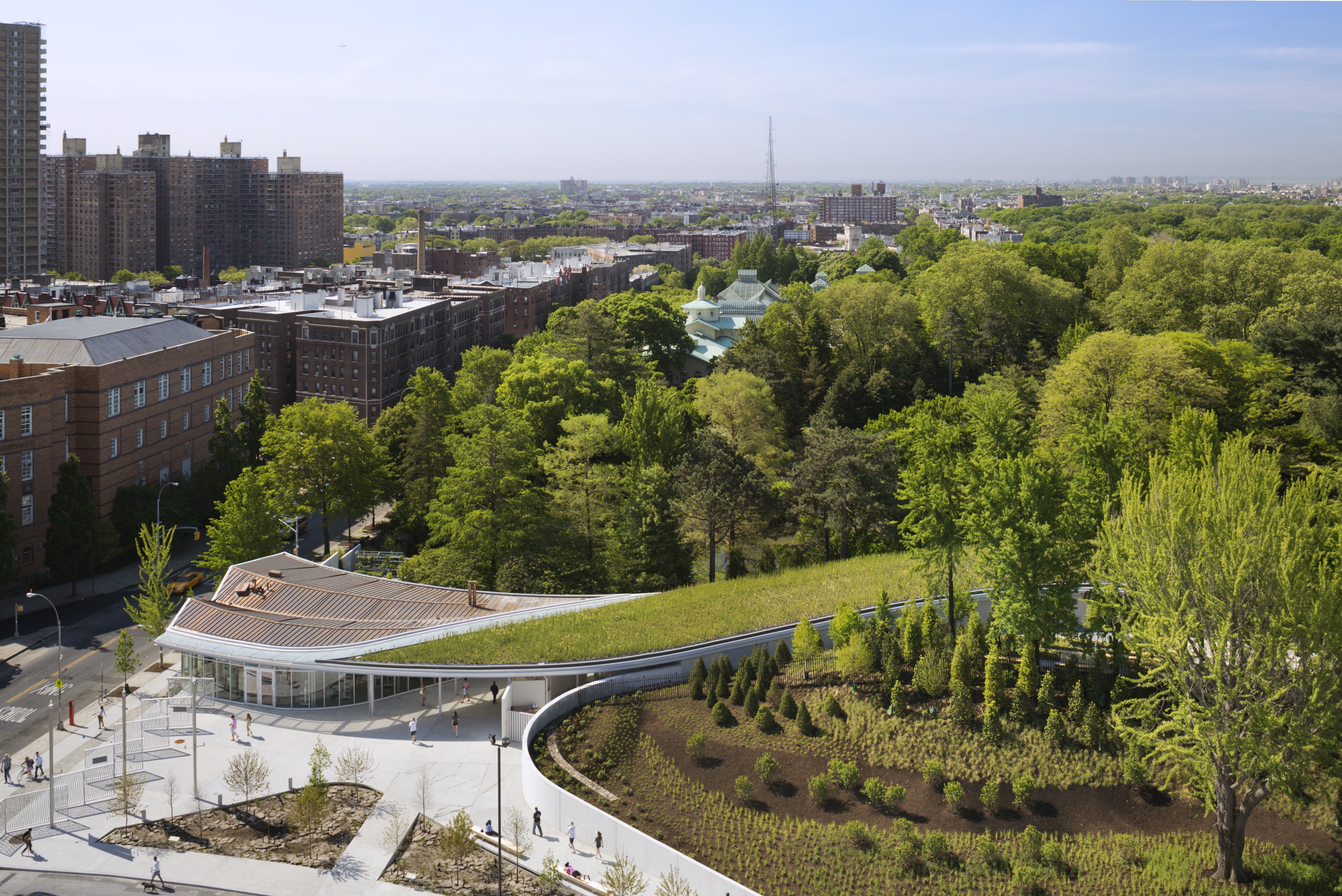 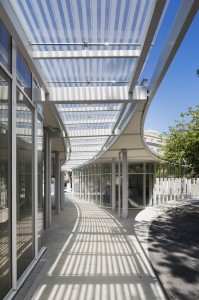 It’s not entirely clear, walking up Washington Avenue toward the Brooklyn Botanic Garden, where the garden ends and its new visitor center begins. The transition from the concrete facade of the contemporary building to the verdant grounds of the century old garden is as smooth as the fluidity of the center’s curved exterior walls. Its grass roof sways in the wind giving the center the appearance of having grown organically out of the hillside in which it’s embedded that belies the nearly 22 months and $28 million it took to build it. “There’s almost an elevation of the garden’s topography,” says Kate Blumm, communications manager at BBG. “It’s like someone came in and scooped up the ground and lifted it up.”

Keen to create a space that both welcomes the up to 37,000 people that visit the garden daily, and respects the ecological sanctity of the garden’s 52 acres, construction of a new visitor center was a necessary undertaking if the garden was to fulfill its greater purpose going forward into its second century, says Scot Medbury, BBG president . The garden turns 102 years old this year.

“The whole idea here is to help deepen your ability to appreciate the garden as a collection of plants, as a place of science and of beauty,” Medbury explained on a recent tour of the site. “We have the highest, single-day attendance of any North American garden. We really pack them in, and we had this little tiny entrance here before.” 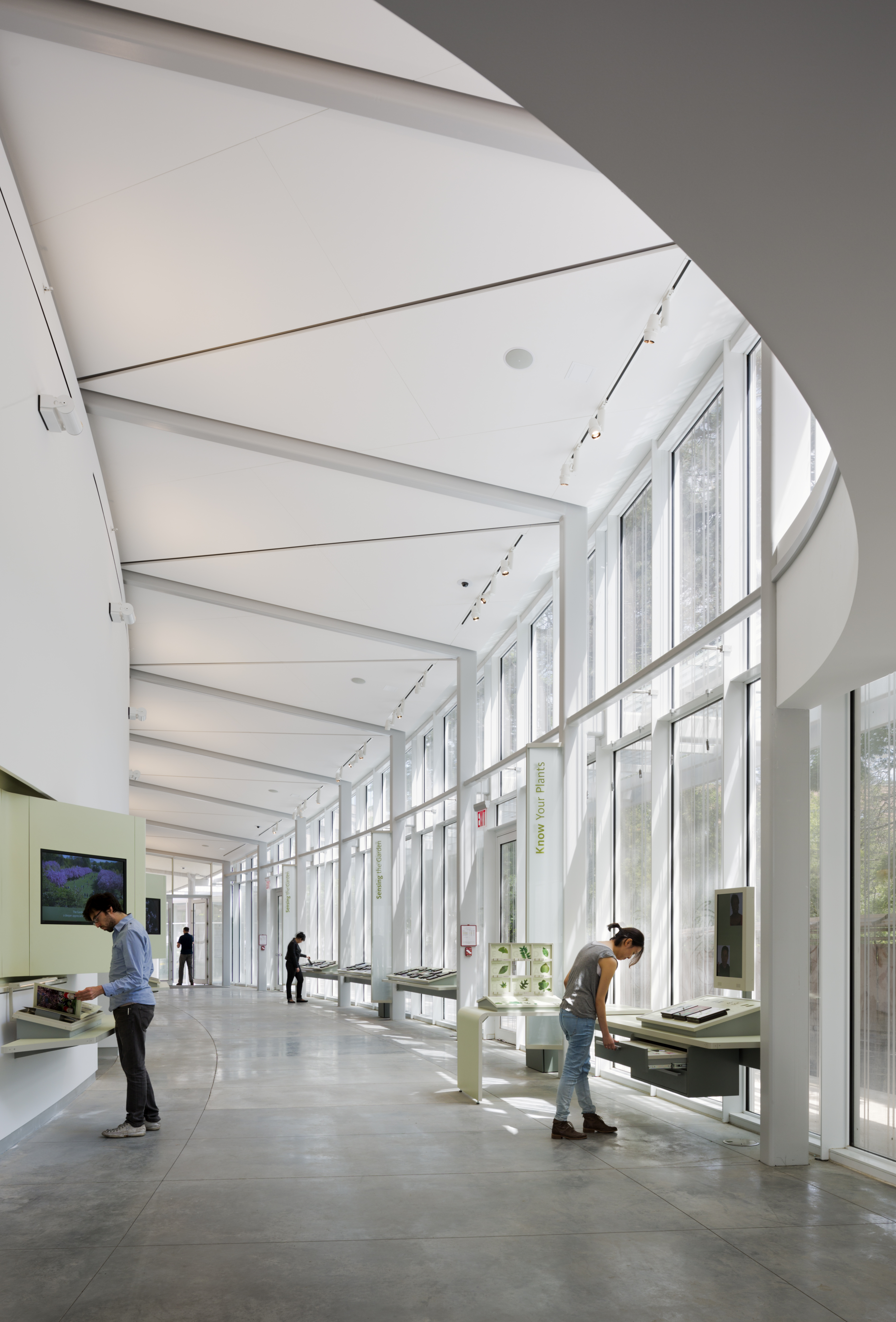 Not only does the new center provide greater accessibility to the garden itself, as well as orientation and education tools to help visitors obtain an in-depth understanding of BBG’s offerings, it’s also an example of how sustainable, environmentally conscious design and contemporary architecture need not be mutually exclusive. “We got into this project and wanted to do something that really is very much of this time,” Medbury says. “I think, and this might be a little bit of hubris, but I think this is the finest contemporary building in the borough. We really wanted to make green and sustainable features obvious and evident to people, too.”

The Weiss/Manfredi architecture firm, which designed the visitor center, introduced a number of sustainable features to the site, in an effort to obtain Leadership in Energy and Environmental Design (LEED) Gold certification for the building, including the 10,000-square-foot living roof; a series of rain gardens with a French drain by the front entrance, which collect rain water that recharges the aquifer supplying water to the center; and a geoexchange system below the center’s concrete floors, which consists of a series of wells dug throughout its 20,000-square-foot space filled with water that heats and cools the center depending on the season. The fact that the center is embedded in a pre-existing berm helps increase its thermal efficiency as well, as does the floor-to-ceiling glass walls on the center’s southern exposure. 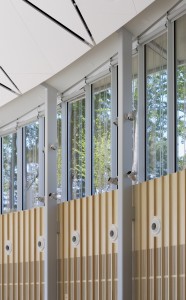 A view of ginkgo two ways

The leaf shape of the living roof is echoed in the center’s event space just below it, which is lined on one side with ginkgo wood harvested on site at the garden.

“I was always sensitive to a botanic garden cutting down trees, but we always say, everybody’s a user of products, and we wouldn’t displace the need to some distance forest,” Medbury says. “These were trees that we planted, and now we were ready to use the wood.”

Medbury then points toward the windows up above the inlaid wall that look out over the hillside where rows of live ginkgo trees christened Ginkgo Allée are in view and offers his opinion on the juxtaposition. “We call this ginkgo two ways,” he says.

Heading outside and up the hill to get a closer look at the ginkgo trees still in the ground, an entirely different view of the center unfolds. The living roof with its over 40,000 plants covers up the contemporary structure below its soil and offers uninhibited views of the Japanese Hill-and-Pond Garden and Cherry Esplanade just beyond the new site. 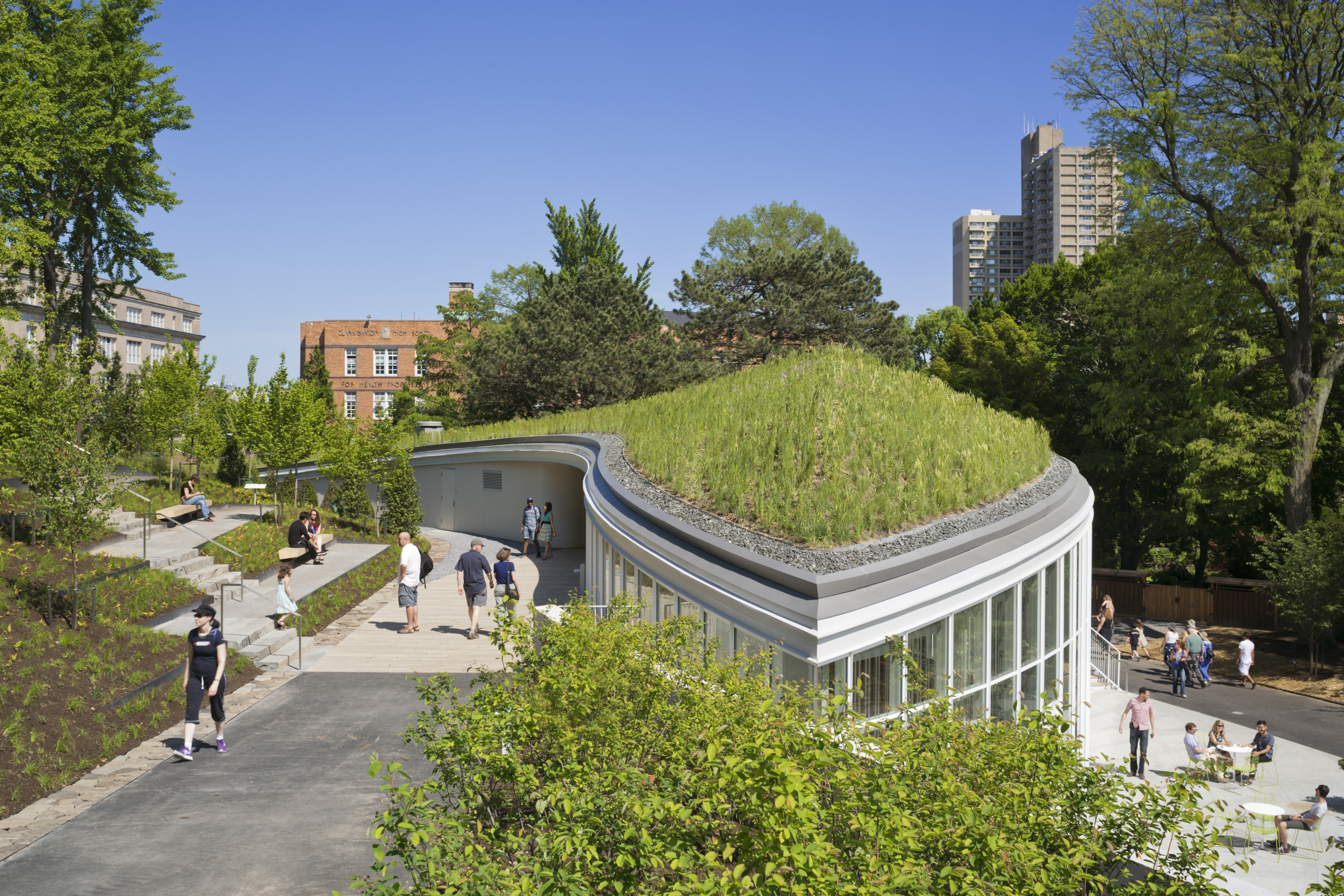 Tucked in a corner of tree-lined space where the curved side of the center seems to head into infinity, Medbury points out a special place both he and Blumm hope will soon be occupied by a contemporary sculpture on loan from a major museum neither one is ready to name quite yet. “I think that art and garden are bedfellows in their own way,” Blumm says. “Contemporary art, like architecture, can feel cold and uninviting, but I think that siting it in the garden somehow makes it more enjoyable.”

That same logic holds true of the visitor center itself. It serves as a threshold through which the grey exterior of Brooklyn’s streets gives way to the green interior of the garden, blurring the edges of the two into ambiguity.

“Brooklyn is vastly residential,” Medbury says pausing for a moment to admire the living roof up close before an automatic sprinkler forces us to retreat down below. “We’re second only to Las Vegas in having the least amount of open or green-space-acreage per capita. We’re so clear that our role in Brooklyn is only going to continue to grow. To remain relevant and ahead of the game is important.”