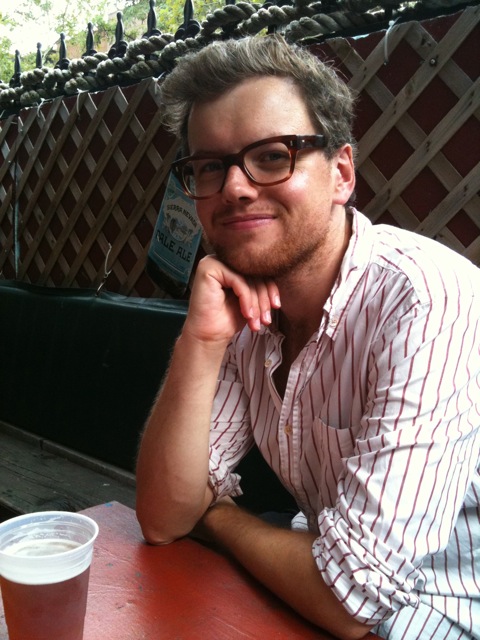 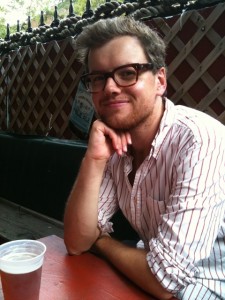 Whenever I see someone engrossed in their computer at a coffee shop I assume they’re either a freelancer or a Facebook fiend. In the case of James Gregor, it turned out to be neither. He is in fact writing his first novel, which I’ve observed first hand over the past several months over flat whites at Smooch Cafe in Fort Greene. For now however, his literary work remains unfinished, as after four years of living in New York, he’s moving to Montreal–James is originally from Nova Scotia. Here he shares one of his last weekends in Brooklyn, as well as a few favorite places he’s discovered over the years.

FRIDAY: My life has recently unraveled–I initially blamed this on the pressures of New York and my status as a “resident alien,” but now believe I was fully complicit–and I spent most of Friday dealing with one of the consequences of this unraveling, namely moving out of my apartment. But I began the day as I often do–with breakfast at Smooch Cafe, on Carlton street. This gentle corridor of wobbly tables has been the nexus of my Fort Greene life. I’ve written hundreds of pages there, spent hours staring at the wall or the other patrons in frustration, and made many friends. It’s a good place to go when you’re hungover, as I was, and don’t want to be alone with your own melodramatic sense of regret. I will miss it terribly.

After breakfast I went back to my apartment and sat cross-legged in the middle of my empty room. My mood oscillated: what was I doing leaving New York? No, it was the right decision! To distract myself, I read a dozen reviews of Sheila Heti‘s new novel How Should a Person Be? and then moved on to interviews with the author herself. I feel a connection to the book as I met Sheila about six years ago in Nova Scotia and remember her discussing this new project which was “kind of like The Hills.” Here we are in 2012, and it’s being reviewed by James Wood in the New Yorker. Congratulations Sheila.

Gentlemen from The Salvation Army were scheduled to come and pick up my roommate’s couch. She was running late and texted me frantically, asking me to relay to them that she was “just around the corner,” when in fact she was in the West Village. I made some polite, meandering conversation, mostly centered on her habitual lateness, and when she finally did arrive the gentlemen informed her they would not take her couch. I had visions of throwing my back out trying to get it down four flights of stairs. Undaunted, my roommate began “negotiating,” and half an hour later the couch was gone.

My roommate and I celebrated with white-wine spritzers. It was  perhaps unwise to drink wine on such a punishingly-hot day. Feeling dizzy and hungry, I went down to Farmer in the Deli on Myrtle and Adelphi and bought one of their substantial and cheap made-to-order sandwiches. Fortified, I was able to put in a few more hours of packing and trashing.

That night, aware that if I went out for a drink it would inevitably turn into four, I stayed in. I watched some of my favorite scenes from Blade Runner, assembled a bed from the contents of my suitcases (my futon was gone), and went to sleep early.

SATURDAY: This was the day of reckoning. My roommate and I had to get all of our stuff out, and “spackle” the small nail holes we had made in the walls. I once again began the day at Smooch, then returned to my apartment and read the Times and The Globe and Mail. The mood was oscillating again. I decided to drink water instead of wine spritzers.

Sasha, a good friend and generous soul, came down from Williamsburg to help me transport my suitcases to her place, where I would be camping out for the rest of my time in Brooklyn. I called a car service, said goodbye to my roommate and her boyfriend, and drove away from Fort Greene.

In Williamsburg, we prepared to gather with some friends on Sasha’s rooftop. After a trip to the bodega for beer, we freshened up, and strung lights. The guests arrived and negotiated the treacherous ladder. We observed several competing rooftop parties, and contemplated the Manhattan skyline. A friend from grad school discussed his preference for The Art of Fielding over The Divine Comedy. Someone I didn’t know outlined the details of a possible mob hit in Chinatown. My friend Alex threatened to knock a collection of empty beer bottles onto the sidewalk. At three o’clock the remaining guests hugged me goodbye and climbed down the ladder. I followed and went to bed.

SUNDAY: I didn’t feel great when I woke up. Sasha felt worse. We decided to do things gingerly. The heat was horrendous. Passing the interminable line-up for the McCarren Park Pool on our way to Five Leaves, I was reminded how little public pools interest me. I had a coffee, eggs, toast, bacon etc., and started to feel better. But Sasha was holding onto the table as though her chair was listing, so we decided to go home. Our our way we took a detour to a food market and bought blueberries and peaches for a crumble. My phone buzzed. It was a text from an unhappy friend on the West Coast. “Life is hell,” she wrote. My melodramatic sense of regret was creeping back, and I could almost agree. Sasha and I went back to the air-conditioned apartment and while Sasha took a nap I tried to work, but failed miserably.

Sasha woke up and baked the crumble, while I hovered. We walked to an apartment about fifteen minutes away–people Sasha knew–for a barbecue. I had that empty hungover feeling and gorged on a four-cheese dip and potato salad. We ate sausages (not Sasha, she’s vegetarian) and vegetable kebabs, and then dug into the crumble. A photo editor at Artforum discussed the difficulties of putting out a digital version of the magazine.

On the way back to Sasha’s I began thinking about writing my own version of Goodbye to All That, Joan Didion’s famous essay about leaving New York. My melodramatic sense of regret returned. There was something comforting about Didion’s example however, because although she left and stayed in L.A. for twenty years she did eventually come back to New York, and lives here to this day. When I got home I took an Ativan and passed out, and in the process missed a “going away” party planned for me at Smooch.

The streets of Fort Greene and Clinton Hill: It’s a historic district. The housing stock is beautiful. I love turning down South Portland late at night. The trees cast mottled shadows on the sidewalk. There’s a feeling of mystery, but it’s comforting.

Henry Public: During the dreary winter of 2010/2011 my friend Michael and I spent many a frigid night perched at the bar. The end of the evening was often blurry–Michael once forgot where he lived–but in my mind it retains the glow of time spent well–that is, with good friends.

Atlantic Avenue: Apparently this was supposed to be Brooklyn’s Champs Elysées. Not quite. All the better though, as the Champs Elysées is just optical shops and McDonald’s now anyway. I don’t know exactly what I like about this street. I suppose it’s the shops–my friend works at Steven Alan, I’m a fan of Hollander and Lexer–and the fact that there are so many other picturesque streets nearby. Atlantic Ave. itself isn’t that picturesque. Maybe it’s the possibility of spotting Martin Amis.

Farmer in the Deli: There’s nothing particularly lovely/special about the space, but the sandwiches are cheap and delicious. This is one of the few affordable food options remaining in an increasingly-expensive neighborhood.

Smooch: One of a kind

Brooklyn Promenade: I can stare at the Manhattan skyline for hours.

Fort Greene Park: Right beside my apartment. Walt Whitman was an advocate for its construction. You can disappear into the green.