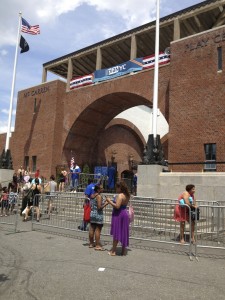 It’s only taken a few days for the newly-reopened McCarren Park Pool to take on an aura of notoriety.

Last Friday, three lifeguards were attacked by a group of unruly kids.  Yesterday, one police officer was punched in the face and another officer’s arm was injured by three teenagers, who were subsequently arrested.  The Facebook-Twitter-blog-o-sphere has largely responded angrily to the violence, condemning the perps as troublemakers.

And we concur.  What the heck is wrong with people anyway, fighting and causing trouble in this gorgeous new pool space?

But we also understand that it’s hot, the lines to get into pools all over the city are long and the rules to get in aren’t clearly posted outside. We overheard a few conversations on the track at McCarren Park this morning, complaining about imperious pool workers and overly strict adherence to regulations. We wanted to find out whether people are buckling under the weight of the strict rules and inflexible guardians of the peace, and what locals think about all the commotion.  So we headed over to McCarren Park to chat with folks about what’s really going down.

We caught up with neighborhood resident Kelly Sherman, 28, as he was waiting in line just before 2pm.  As it turns out, he was at the pool on Friday when the first fight broke out.  He told us that a group of about 20 kids (young teenagers) were doing flips into the pool in the evening around 6pm, and the lifeguards responded by whistling at them to knock it off.  They dispersed, then came back—all flipping into the water at the same time.  When the lifeguards got into the water with them, things got testy.

“They were just a bunch of punk kids,” Sherman said.  “Aggressive punk kids, but just kids. I don’t think they were dangerous.”

The lifeguards and police let them go with a warning, we were told.  It was only the second day, so perhaps no one wanted to rock the boat too hard.

When history repeated itself on Monday, however, the cops seemed to reach their limit.

Jeanette Rivera, 60, and her friend George, 55, are long-time Williamsburg residents who were relaxing in McCarren Park this afternoon.  They told us that they had front-row seats for yesterday’s drama, which kicked off in much the same way as Friday’s.  According to Rivera, a group of around 20 kids all ran and jumped in at the same time, again at around 6pm.  But this time, they were all escorted out.  At first the crowd seemed to think the authorities were unnecessarily tough on the rabble-rousers, crying, “Oh, leave them alone!”  But then a police officer approached one of the kids, who put up his dukes and took a swing.

“Kids are gonna be kids,” Rivera said, shrugging her shoulders.  “They like a little mayhem.”

Despite these flare ups, Brooklynites seem to be undeterred from visiting the new pool. No one we spoke with said that they felt the least bit ill-at-ease, including moms with little kids in tow. The general consensus was that the recent ruckus was just kids being kids, and the new pool sorting through understandable growing pains.

“Tomorrow will be the real testament,” said George, who declined to give his last name.  “With the Fourth of July crowds, I guess you’ll see more commotion on the line and inside.”  If McCarren can get through the busy holiday without too much kerfuffle, he said, they will probably be in the clear. 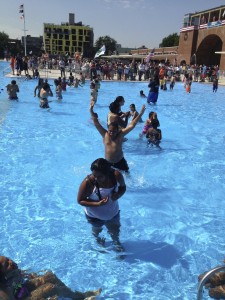 One young pool visitor told us that after yesterday’s melee, he wasn’t surprised to see that security seemed a little tighter today.  There were a lot of police, he said, and the lifeguards seemed especially attentive.

“I tried to carry my sister and throw her in the pool, but I stopped,” said Franklin Rondon, 14.  “I realized I would get in trouble.”

We asked Rondon if people seemed annoyed by the strict pool rules, which range from allowing only white t-shirts on the pool deck to no cell phones.

At that, his little brother Joel, who is 9, chimed in.

“Yes!  You can’t do anything,” he said.  For that reason, he said he prefers the Pit Pool (Hamilton Fish Recreation Center on the Lower East Side).  “You can jump there, you can do whatever you want.  It’s great!”