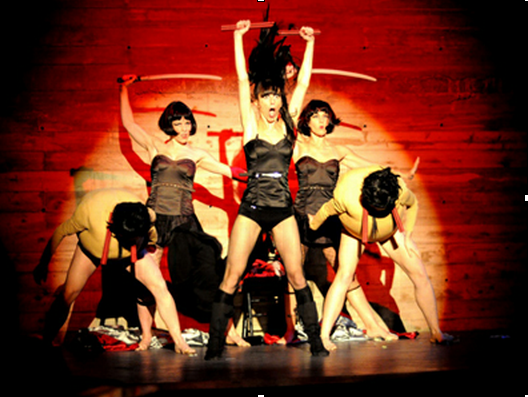 Jenny Rocha and Her Painted Ladies

At 10pm, the line snakes around the corner, and a crowd resplendent in business casual stalks the cobbled streets of DUMBO. Some up the ante a bit with heels and glittery purses. Behind me, two young men earnestly discuss suits–liking them, wearing them to work, buying them—and the merits of the pocket square. We’re all going to see lots of boobs!

We’re in line for the reliably popular Floating Kabarette, which plays Saturday late nights at Galapagos Art Space. This modern burlesque standard, which has been running in one form or another since 2010, is such a hit that they’ve recently added the occasional Friday night, an hour or two earlier for the working crowd.

Inside, curving banquettes in black and red leather, sleek runway-style railed aisles, and Galapagos’ trademark moat and wall candles add to the feeling of classy decadence. A stranger sharing our table complains fiercely about her Perfect Manhattan, which doesn’t seem to contain any rye, and has, she fears, been shaken or stirred (whichever’s worse). “What’s wrong with this place?,” she wonders.

She’s alone in her bad mood, as everyone else around seems remarkably cheerful when the show begins. The ‘Floating’ in this Kabarette refers to not only the moat but the line-up, which alters weekly but is anchored by several regulars. Hosting duties alternate nights between dirty duo Empress Olga + Backdoor Bjorn, The World Famous *BOB*, and the suave Bastard Keith, who bills himself as “a polysexual reprobate you can believe in.” The Bastard’s saucy rejoinders and soulful crooning provided much of the show’s human warmth, as he teased and assessed the audience (two bachelorette parties, one birthday party, and one…wedding?), invited nasty texts, stole penis straws, and talked up the dancers.

The performers themselves, leggy and impeccably attired, are a mix of Galapagos regulars and all sorts of NYC and East Coast burlesque all-stars. On the Saturday I was in the audience, the lineup included Jennie Rocha and her Painted Ladies (tapping, odd hats, pasties, and some good ol’ classic wet t-shirt fun), The Ukeladies (as advertised), Legs Malone (she of the 34 ½” inseam and endearingly giddy antics, more pasties), contortionist Bizkitt, an aerialist, and Madame Rosebud.

Many of the acts were sexy, slick, funny, bendy or otherwise enjoyable, but the evening lacked an overall arc, and long, well-lit pauses after every two performers went a long way toward killing the buzz.

Galapagos, for all its sleek design, doesn’t always have the best sightlines or the most intimate feel. The tables under the balcony and behind the moat can feel removed from the action. Since ‘distant’ and ‘removed’ are the last things you want to feel at a burlesque show, even an upmarket one, make sure to reserve one of the banquette tables front and center—not only will you be much closer to the action, but everyone else’s eyes will be on you. Which was really part of the point of coming, right?