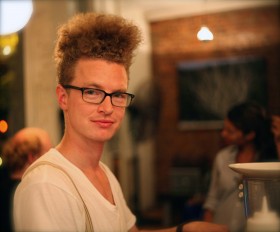 John Rice just got off the train from Manhattan, Kansas, which he calls the “little apple.” Having studied interior architecture and product design, he’s in town for a workshop exploring ways to create a symbiotic, sustainable relationship between Brooklyn’s expanding architecture and the borough’s naturally occurring ecosystems. This being his first weekend living in Brooklyn, I was interested in seeing how he spent it.

FRIDAY: It was my first day in Brooklyn. I arrived on the train Thursday night and got to the hostel and crashed. I had some work to do. Loose ends from back home, so I found a coffee shop. I hung out for the better part of the day doing some work then headed to Fort Greene Park for a siesta. I was listening to this band play some music. Then all of a sudden they stopped and two girls showed up. One got down on one knee and proposed to the other. They were friends of the band, and it turned into this really heart-warming Brooklyn moment.

That night, I’d arranged to go meet a friend and a bar. Any bar. This is where it gets funny. I met her at the Metropolitan stop on the G train. When I got up out of the stop, I recognized the whole area from two years ago when I was here before. I knew Union Pool was on the corner, so we went in there. It was just an excellent time. We’d spent some time together abroad in Denmark. We had an excellent time catching up. My schedule was open, but she had to move on. I felt like soaking in the nostalgia of that bar because I loved it so much two years ago, so I just hung out and people watched. You won’t believe. More Copenhagen friends showed up. They didn’t know I was there. They just showed up. It was a Copenhagen reunion in the bar. Totally spontaneous on my first day in Brooklyn. We bar hopped to Alligator Lounge. They were moving on to some arcade, but I retired home. I think the train ride was getting to me.

SATURDAY: I went with some hostel friends to Central Park. Even though it was so hot, I convinced them that it would be better outside. Sure enough it was. I’d been to Central Park a couple times a few years ago, but this is the first time I’d ever stumbled upon the zoo. We walked by and stopped and watched the seals. Zoos weird me out a little bit because there’s so much natural ecology that you can be impressed by in Manhattan and the outer boroughs. Seeing seals is excellent, but why is there a seal in Manhattan? It resets your barometer for what is interesting nature. You end up forgetting that it’s everywhere. It’s kind of sad actually because the rocks in Central Park are phenomenal.
I already had plans for the evening. A friend of mine, who first introduced me to New York, his dad has a condo in the middle of Manhattan–ironically, my first impression of New York was 13 floors up on 5th Avenue, which is not everyone’s first experience, but it was amazing. I always make a point to go see them. The skyline was amazing, and now there’s the new Freedom Towers. We had drinks on the roof and rehashed all sorts of stuff. It was a wonderful Saturday night. We went out for dinner and got some hummus and baba ganoush. I’d had eggplant, but that was my first time with baba ganoush. It was amazing. We went on into the night, and then I went back to the hostel.

SUNDAY: Today was another coffee exploration. I found this place, WTF Coffee Lab. Really cool. I had so many questions for the guy. He’s got these very elegant siphons with a dripping mechanism that he can dial in so that it takes 24 hours to make one pot of cold-brew coffee. It’s incredible, and they’re right there on the wall. I was getting a hot coffee, and he had an equally curious contraption that was like a siphon mechanism, which he heated from below with some sort of butane heater. It was another way of brewing a cup of coffee. He’s basically a chemist who’s creating  your morning beverage. Everything is for a reason and the funny thing that I learned is that he owns a bar where he does the same thing–Dick & Jane’s. We just sat down and talked about the armchair depths of quantum physics and Leonardo Da Vinci and lots of stuff about the God Particle they just found in France. Just a tennis match–appropriate for the day with Wimbledon–back and forth the whole time, just feeding off of each others thoughts in this little coffee shop. It was fantastic and right down my alley.

There came a time when I need to get some work done and find a place that was suitable for that. I came to Smooch and got my work done. It is my office away from home currently with the hostel. Tomorrow I begin a one-month workshop, ONE Lab, with Terreform 1.

RATING: I’m trying to imagine a way in which the first three days in Brooklyn could have been better. Around every corner was a new thing, a new person. It was a five–that was the good number right?