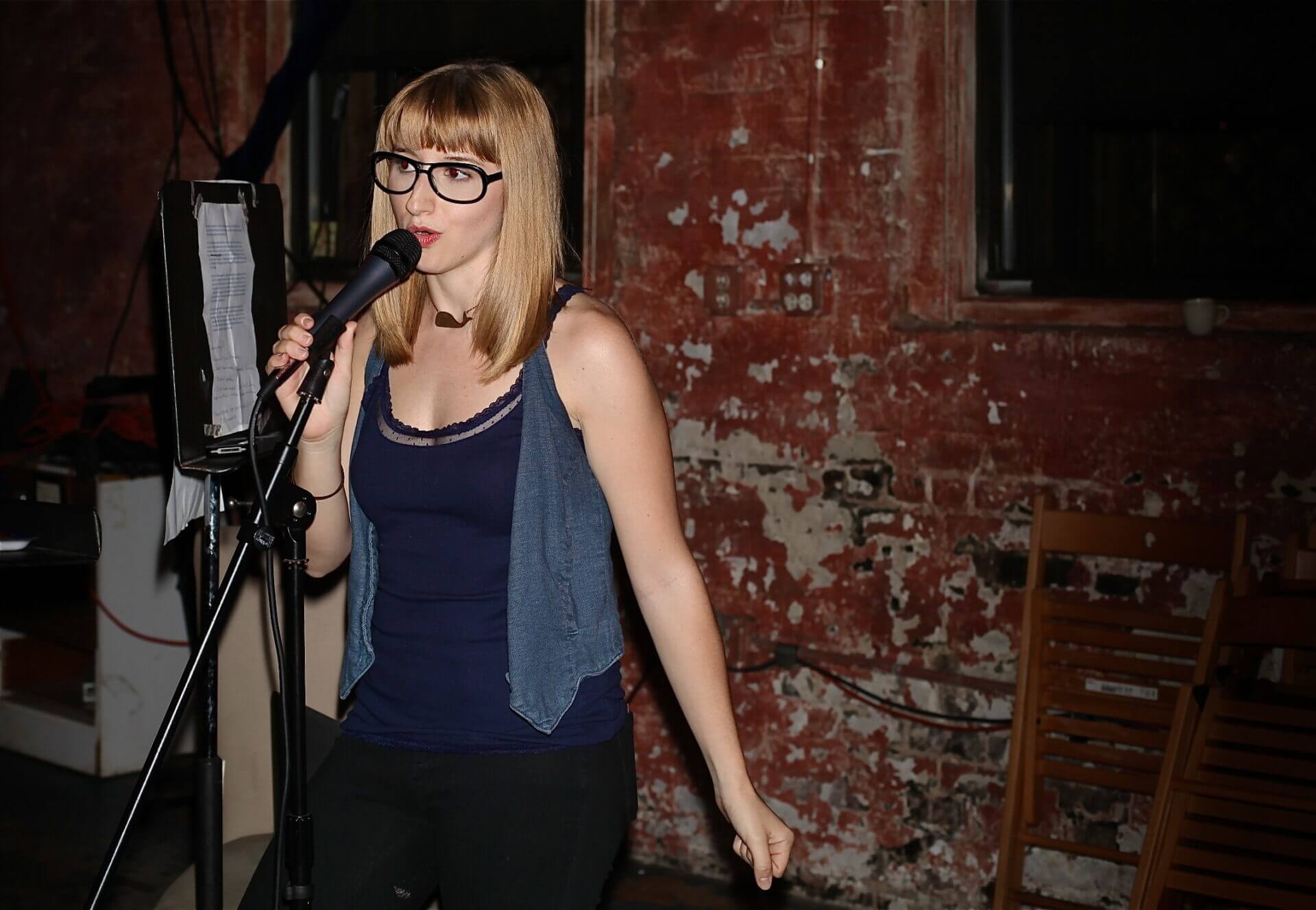 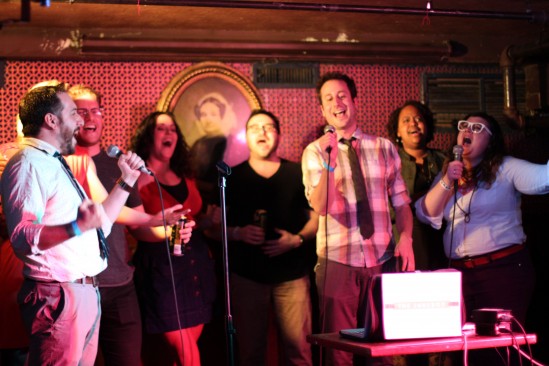 If you ask Kerri Doherty when she started telling stories as performance art, she she’ll tell you about a childhood role as Steve Urkel playing to a sold-out house—her mom and dad. “He only had, like, two catchphrases, so I’m pretty sure my parents hated me for that,” she says.

Now the host of StorySLAM “I Like You, Maude” at The Tea Lounge, Doherty has taken her first instincts, appropriating the antics of what may have been the most grating wacky neighbor character in television history, and transformed them into a sophisticated craft of audience engagement and self revelation. Just like Doherty’s narrative skills, storytelling as a form and as performance, has grown tremendously over the past 20 years. From This American Life to The Moth, storytelling has moved from the campfire to the stage, and more than a few modern Scheherazades are plying their craft in Brooklyn. (For a taste, check out Lessons Learned the Hard Way, the event we’re hosting at Dekalb Market tonight at 7pm. Brooklyn entrepreneurs will share some of their most lamentable, and best teachable moments.)

Performers at The Jukebox, a monthly show at Union Hall, tell a long-form story based on a theme like “camp,” then cap it off with their own rendition of a song that complements the content–it’s like singing the soundtrack for the movie of of your life. “Karaoke is universal,” says Steve Jacobs, one of the founders and hosts. “It humanizes. It’s hard to be cool doing it. Karaoke is the great equalizer.” Steve Heisler and Margaret Lyon, who both work as journalists by day, round out the hosting trio. They all met and became friends while taking comedy classes in Chicago.

Some of the inspiration for the experience that they curate at Jukebox came from a Chicago show called Rory Lake’s Karaoke Dreams, in which the host presides over the evening dressed in American flag pants and a feather boa. “There wasn’t a large selection of songs, but he would sing every song religiously,” Heisler recalls. “There was no stage, and everyone sang along. Everyone was invested. It should be communal.” Like that show, The Jukebox makes spectators feel like they’re part of the conversation, laughing along to everyone’s-been-there stories like Andy Ross’s high school tale of a talent show disaster, then singing along with the Dirty Dancing classic, “I’ve Had the Time of My Life.” “The crowds are more receptive here,” says Lyon, crediting the show’s local audience. “We have an emotional tie to Brooklyn. We can all walk [to Union Hall]….it gives us a sense of ownership.”

Identifying yourself as a storyteller, and working within a group to improve on those skills, can also be the glue in a meaningful personal or professional relationship. “Late at night at a bar, the three of us just met and started talking. Then we realized we were all storytellers,” says Talisa Chang, co-founder of Her Girl Friday. Along with Diana Diroy and Juliet Linderman, Chang hosts events for women who are nonfiction storytellers to meet and enhance their craft, like the very well-attended “Throw Like a Girl: Pitching the Hell Out of Your Stories” panel at Public Assembly featuring New York Times, New Yorker, and Atavist editors. HGF focuses on sharing the perspectives of others—specifically women—rather than recounting your own personal story, which presents unique challenges, especially when it comes to making sure the piece feels genuine. “One of the things that Carolyn Ryan (Deputy Metro Editor for The New York Times) said at our last event was the element of surprise makes a good story,” says Diroy. “I agree. Allowing yourself to be surprised with the stories you find and uncover, which in turn also surprises your audience.”

In addition to the opportunity to ask for advice from pros like Ryan at events thrown by HGF and other storytelling collectives, Brooklyn is also home to formal storytelling curriculum. Andrew Linderman, teacher of Skillshare’s Storytelling 101: How to Tell An Amazing Tale, urges students to first answer the question, Why does the audience want to listen to this story? The $75, three-week course leads participants through the process of building an engaging five-minute story with a beginning, conflict, transformation and conclusion—not necessarily for stage performance but appropriate to any audience the student might want to impress.

Linderman got his start performing in Upright Citizens Brigade’s improv classes. “In my opinion, the root of comedy is character,” he says. “To get to the root of the character, that requires storytelling.” Interlacing storytelling with humor is a cornerstone of the Brooklyn comedy circuit, where many storytelling shows, like The Jukebox, provide a humor-friendly conceit the performer can use to build upon, attracting professional comics as well as amateurs to their stages. 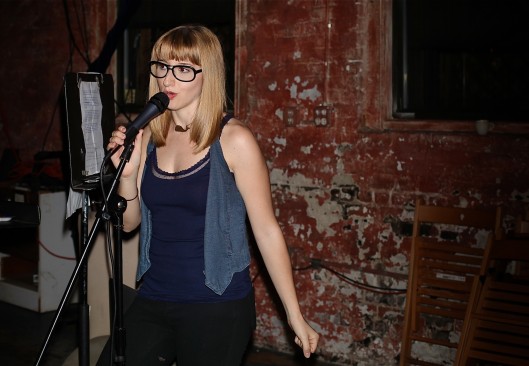 Kerri Doherty hosting "I Like You, Maude" at the Tea Lounge. Photo by Eric Medsker

There’s still plenty of room for unstudied storytellers though. Doherty, the early Urkel impersonator, and host of I Like You, Maude, is also the managing editor of Fucked in Park Slope, and she knows a thing or two about how to impress audiences. The lottery-style show allows anyone to be the star performer. “It’s really fun because a lot of people put their name in the hat on a whim—they were just at Tea Lounge to get a coffee or whatever and have never told a true story in front of an audience of strangers, and nine times out of 10 these people knock it out of the park,” she says.

Telling those juicy, emotionally revealing stories in front of an audience isn’t always easy, though. All the storytellers in this article spoke of the initial anxiety they experienced, being so honest with the public. And, they also explained that coming to terms with this discomfort became a reward in and of itself. As Chang of Her Girl Friday advises, “Champion your own failures.” Doherty now hosts several podcasts and quirky Brooklyn storytelling events, like Union Hall’s Geeking Out featuring a Final Fantasy cosplayer on August’s show. She emphasizes that while going to open mics and taking classes are effective ways to get started, fun is at the heart of every successful story. “If you can start a story with the line, ‘There was only a boogie board between me and a glistening, razor sharp row of teeth owned by a great white shark,’ then you’re golden.” At the end of the day, all a storytelling audience is seeking in a performer is a little bit of vulnerability, and that’s a characteristic Brooklyn is never lacking.