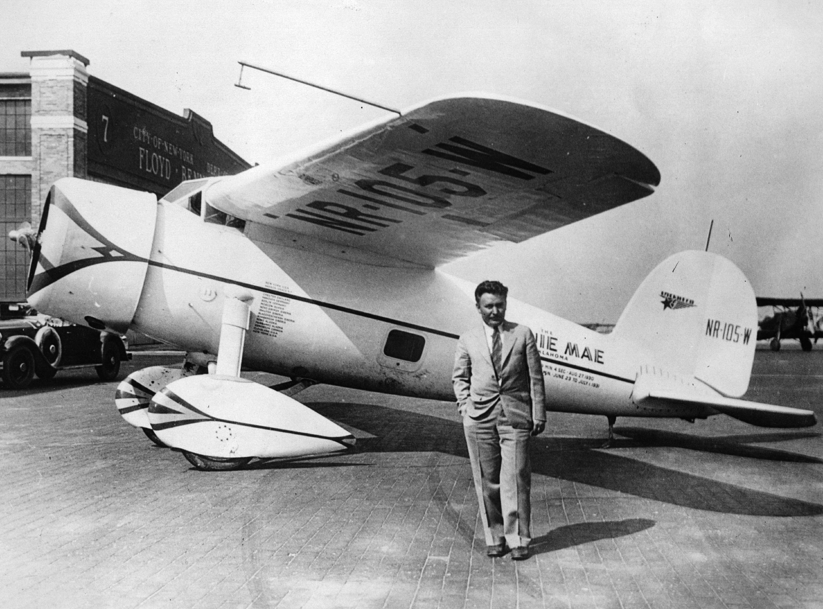 Wiley Post poses with the Willie Mae, the plane in which he completed the first solo flight-around the world.

Post and Austrailian navigator, Harold Gatty at a parade in their honor.

This replica of the Willie Mae is on view at Hangar B at Floyd Bennet Field (credit: Gateway National Recreation Area)

This abandoned hangar wears a palimpsest of signage from the past 80 years. (credit: Allison C. Meier)


Floyd Bennett Field, that great expanse of concrete on Flatbush Avenue where Brooklyn meets Jamaica Bay, was the site of many of the early 20th century’s most significant aviation breakthroughs. On July 15, 1933, it served as the origin point for an especially notable flight by a one-eyed pilot named Wiley Post. Flying from Brooklyn, Post returned to New York a week later, completing the first solo circumnavigation of the world.

Post made his historic flight in a single-engine Lockheed Vega. A replica of this plane is now on display in Hangar B at Floyd Bennett Field. Wearing his signature white eye patch, Post first flew the blue and white Winnie Mae to Berlin nonstop, then to the Soviet Union, then back to North America through Alaska and Canada. After covering 15,596 miles, he returned to Brooklyn, the first man to complete a solo around-the-world flight and establishing a legacy that attracted even more famous pilots and long distance fliers to Floyd Bennett Field. 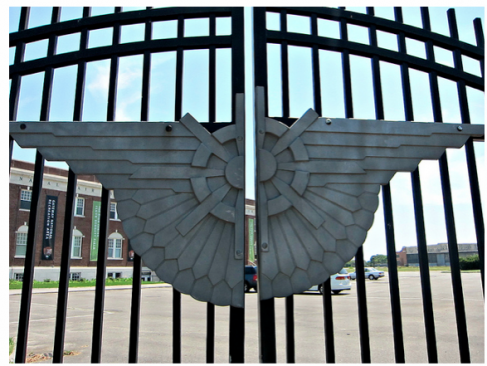 The airfield, New York City’s first municipal airport, opened on May 23, 1931, and was the most advanced aviation facility of its day, attracting aviators like Amelia Earhart, Douglas Corrigan, Jackie Cohran, Laura Ingalls, Howard Hughes, and Roscoe Turner. Named for the Brooklyn-based pilot Floyd Bennett, the airport was built from sand pumped out of Jamaica Bay, and smoothed over the marshy land on Barren Island. Prior to its transformation into an airport, the area was best known and avoided for its horse-rendering plants–which gave neighboring Dead Horse Bay its name.

New York City’s commercial air traffic quickly out grew Floyd Bennett’s capacity though, and the municipal aviation business moved to Queens, with LaGuardia opening in 1939 and construction on JFK starting in 1942. After being used by the Navy, the Floyd Bennett Field was decommissioned in 1971 and became part of the National Park Service’s Gateway National Recreation Area, which includes 26,000 acres around New York Harbor. Four of the eight original hangars were re-opened in 2006 as the Aviator Sports complex, while many other hangars remain vacant and in disrepair. There are also recreation and camping areas on the grounds of Floyd Bennett Field, as well as Brooklyn’s largest community garden, with 600 plots.

This May, the William Fitts Ryan Visitor Center, once the passenger terminal building, was reopened after undergoing a three-year renovation that included a restoration of a series of 1949 murals in its main hall. Once the site for luggage checks and ticketing, the hall now houses several exhibits on the history of Floyd Bennett Field. 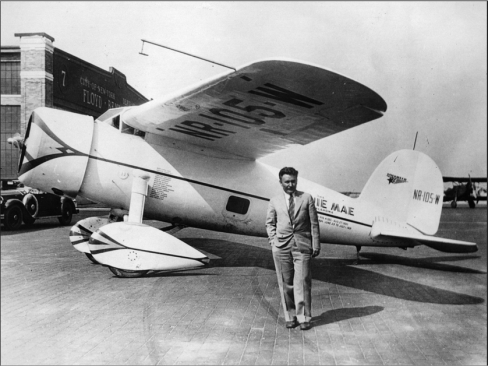 Wiley Post poses with the Willie Mae, the plane in which he completed the first solo flight-around the world.

This airfield is where Wiley Post made aviation history, although the around-the-world trip was not his first aeronautic feat. Born in Texas in 1898, Post grew up in Oklahoma, where he spent most of his life. Fascinated with aviation as a teenager, his career in the air started in his early 20s when he filled in for an injured parachutist in Burrell Tibbs and His Texas Topnotch Fliers’ barnstormer air show. Post performed 99 jumps with the flying circus group, despite having never sky-dived before. He even took some flying lessons from the barnstormer pilots.

In 1926, Post set out for the Texas oilfields to earn money for his own plane. While working on an oil rig in Texas in October of that year, a stray piece of metal hit him in the left eye, resulting in an infection that started to spread to his right eye. He allowed doctors to remove the left, and the infection eventually left the right eye.

Despite the accident, Post managed to earn his pilot’s license. He had no depth perception, so when flying he would use things like telephone poles and two-story buildings to gauge his landings. In everyday life he wore a glass eye, but when flying he wore his signature white eye patch because of the pressure fluctuations at altitude. He used workman’s compensation money from the accident to buy a Curtis Canuck airplane, and in 1928 he became the personal pilot for Oklahoma City oilman F.C. Hall. Post flew his first Lockheed in 1928 for Hall, which was named the Winnie Mae after Hall’s daughter, and when Hall sold the plane back to Lockheed, Post went along with it to work as a test pilot for the aviation giant. In 1930, Hall rehired Post and bought a new Winnie Mae plane, a Vega, in which Post started flying long distance flights.

After Post won the prestigious 1930 National Air Race Derby from Los Angeles to Chicago, Hall encouraged him to use the plane in more air competitions. However, Post had his eye on something more ambitious: circling the globe. With Australian marine navigator Harold Gatty, who had innovated new navigational devices including a gauge for ground-speed and wind-drift, Post flew from Roosevelt Field in New York on June 23, 1931, and circled over 15,000 miles around the globe in eight days, fifteen hours, and 51 minutes, an astounding time that broke the then around-the-world record by 11 days. (The previous record had been held by Hugo Eckener who piloted the Graf Zeppelin, a German hydrogen air ship, around the globe in 21 days in 1929.)

The city celebrated Gatty and Post with a ticker-tape parade in Manhattan and a banquet at the Astor Hotel. Hall was so impressed he transferred ownership of the Winnie Mae to Post.

Our one-eyed aviator’s next challenge was even greater: a solo flight around the world. Post used an experimental Sperry autopilot and radio direction finder, although these proved problematic during the flight. The flight, which left Floyd Bennett Field on July 15 and returned on the 22, was a success, and thousands greeted Post at the airport. Ever-bashful despite his accomplishments, Post told the  crowd: “I would like to express my appreciation of your enthusiasm. Thank you very much.”

The seven-day, eighteen-hour-and-49-minute flight was 21 hours faster than the flight he’d made with Gatty, and Post only slept twenty hours during the entire week the flight took to complete. Not only was it the first solo flight around the world, but it was the fastest flight around the world to date. Once again, Post rode through the streets of Manhattan below clouds of ticker-tape in humble triumph. 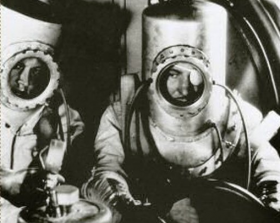 Post then became interested in flying at higher altitudes and invented a pressure suit to fly at 40,000 feet. Working with the U.S. Army Air Service and B.F. Goodrich, Post created three suits using parachute fabric. The first two were failures, but the third allowed Post to fly several flights up to 40,000 feet in 1934, and then up to 50,000 feet in December of that year. The first person to fly in a pressure suit to such an altitude, Post was really an early astronaut–the innovations he made with the pressure suit informed and inspired the suits NASA eventually developed.

The Winnie Mae was retired to the Smithsonian, at the advice of Post’s friend Will Rogers, the writer and humorist and fellow Oklahoman. Post was flying with Rogers on his final flight in Alaska on August 15, 1935, when their plane’s engine quit over a lake near Point Barrow. Both were killed instantly in the crash and their deaths were nationally mourned.

While the real Winnie Mae is in Washington, a recreation is on display in Hangar B at Floyd Bennett Field, built by volunteers with the Historic Aircraft Restoration Project, in addition to a variety of other historic aircraft visitors can view. The hangar dates back to 1941, when the Navy constructed it for its seaplanes that launched from a concrete ramp to the water, escorting military convoys departing New York for World War II battlefields.

Hangar B is open to the public Tuesdays, Thursdays and Saturdays (but call ahead to be sure–sometimes tours and viewing hours are cancelled because of complications like a raccoon on the loose) and Floyd Bennett Field is accessible by the Q35 bus, which connects to the Rockaway Park–Beach 116th Street stop on the A train and the Flatbush & Nostrand Avenue stop on the 2 train.