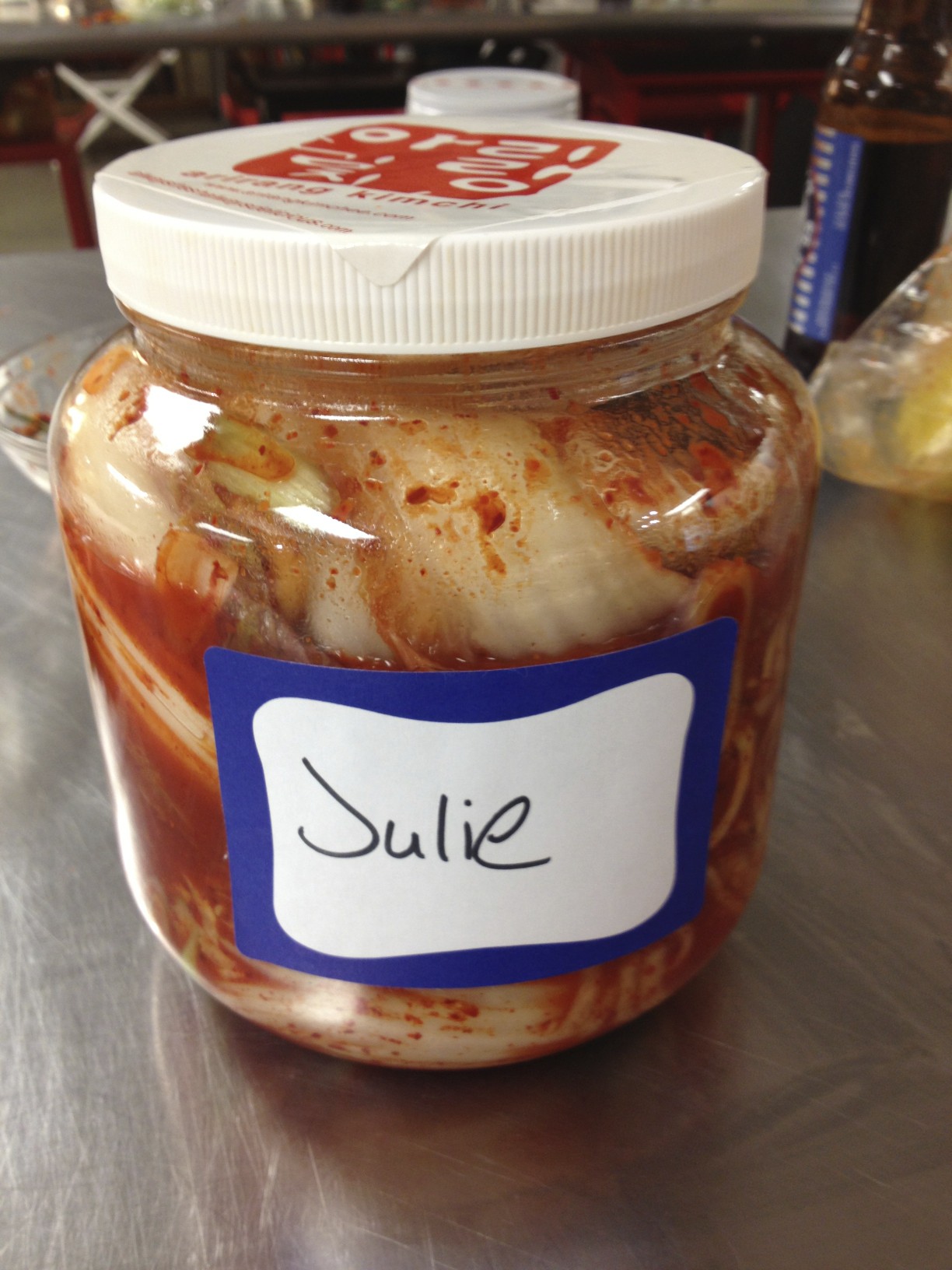 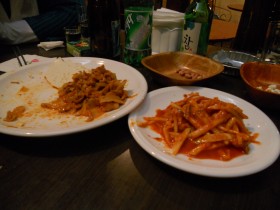 It’s a struggle to remember a meal during my two years in Daegu, South Korea that did not involve kimchi.  The vegetable side dish, usually made with fermented cabbage, radish and scallion, is positively everywhere.  Even when I ordered pizza or fried chicken, there was a little plastic container of kimchi in the delivery bag.

In Korea, there are as many different versions of kimchi as there are opportunities to serve it.  The Pulmuone Kimchi Museum in Seoul boasts a display of more than 80 different types, variations that reflect the ingredients most easily available to different regions.  So when Brooklyn Based caught wind of a kimchi-making class just down the street at the Brooklyn Kitchen, I was curious to see which of the many possibilities would be on the table.

Instructor Victoria Oh of Arirang Kimchi began our class with a sampling of our end goal: baechu kimchi, which is made from napa cabbage, radish and scallion, then flavored with a sauce made from a red pepper mixture.  Oh set about showing her students how to pickle the cabbage, a process that involves rubbing course salt into the leaves and soaking it in water, and put together the red pepper-based sauce that ultimately turns the briny cabbage into delicious kimchi. 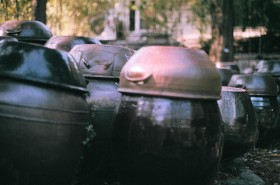 Ours was a shortcut version, as kimchi is traditionally stored in clay pots called onggi and allowed to mature slowly over the winter months.  The traditional clay pots create a natural oxidation process, and their shape varies from region to region.  In northern Korea, pots are larger in order to store more food during a longer winter.  In the south, they are small, short and wide in the middle.  Though modern mechanization has cut the maturation process short for commercial purposes, the clay pots remain a common fixture on rooftops and beside homes. 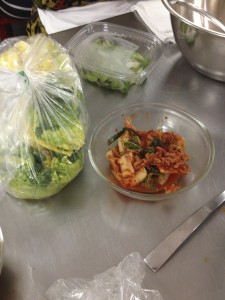 Kimchi is traditionally made during Kimjang, when the crops in the fields and in the marketplace are at their peak, just before the onset of winter.  Families and neighbors come together to make kimchi, first soaking cabbage leaves in salt water for about 10 hours.  As they set, the stuffing and red pepper mixture are put together.  When the brined leaves are ready to roll, they are filled and covered by a mixture that varies according to region but generally includes radish, green onion, garlic, ginger, salted fish juice, powdered red pepper and seaweed.  The peppers, laid out to dry in the sun ahead of time, can be seen on rooftops, in front of homes and businesses in the weeks leading up to Kimjang.  They are then crushed into the powder that makes a thick sauce when combined with water.

Ours was a far less labor-intensive process, as the cabbage was pre-brined and the sauce made ahead of time.  All we had to do was split the cabbage into four quarters, slather the leaves with sauce and stuff it into our jars.  One small napa cabbage made a LOT of kimchi, and we were advised to leave room at the top so that the kimchi could breathe.  The mixture, we were told, will release gases and expand over the next week or so.  A jar filled to the brim would surely result in a messy, smelly refrigerator shelf. 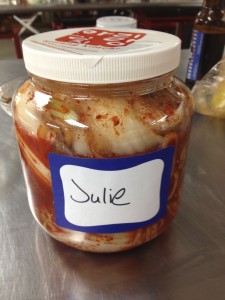 The maturation process varies according to temperature, so kimchi reaches its delicious peak much more quickly in the summer heat than during the harsh Korean winter.  Napa cabbage is in season from March to July, making it a perfect option right now.  I haven’t sampled my own 줄리 kimchi just yet, but am looking forward to pairing it with all manner of other foodstuffs–both Asian and American–as I make my way through the enormous jar I took home. During the class Oh suggested we try kimchi on pasta, and when I got home to a nearly empty cupboard, I put some water on to boil, dumped in a box of rigatoni and slathered on some of the pungent, spicy stuff from the small jar of finished kimchi we got as part of the class. And you know what? It was delicious.