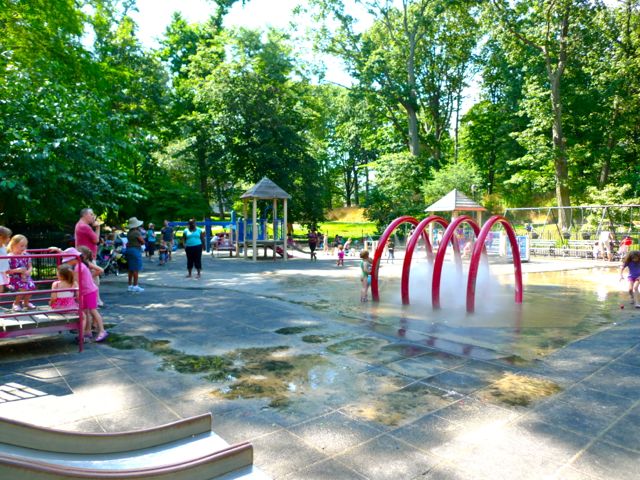 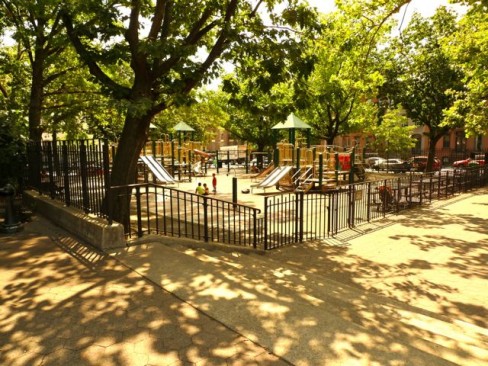 Underwood in the shade

You’ve already got your favorite neighborhood playground, but every now and then it’s fun to visit some sprinklers, swings and sand boxes you haven’t seen a thousand times before. These five playgrounds in Brooklyn (and Queens) are worth traveling to for their cool factor–either because they’re literally in the shade of towering trees, or they have enough water features to justify some direct sun. 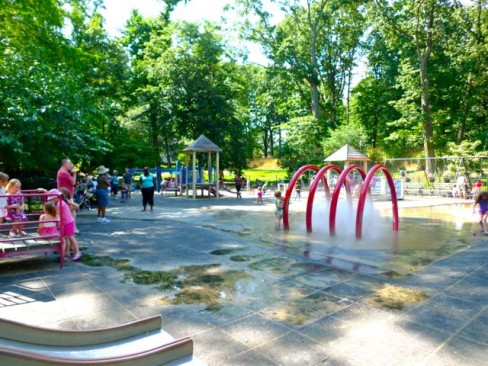 The Kid Wash
Third Street Playground is a gem of a playground in Prospect Park, located off 3rd Street and Prospect Park West. While all the other suckers are sweating it out amidst the chaos at the huge 9th Street playground, parents in the know are relaxing at Third Street. The playground layout is a large, bench-lined circle with several play structures, tire swings, a circle sandbox and two water features all in the middle. Parents can drop anchor at practically any bench and easily keep a watchful eye on the kids while catching up with friends or working on a knitting project from your perch.

A bit off the beaten path, this playground reaps the benefits of heavily wooded Prospect Park, giving parents and kids plenty of shade. (When we asked Heather, a mom and a regular at the park, what she loved about the playground, she said, “At all the other playgrounds you have to stand, so I have to say the best feature here are the shady benches.”) The coolest water feature at Third Street is the huge red coil that is reminiscent of a kid wash. Children can run through one end and come out the other end sparkly clean–great for a long sessions in the sandbox. 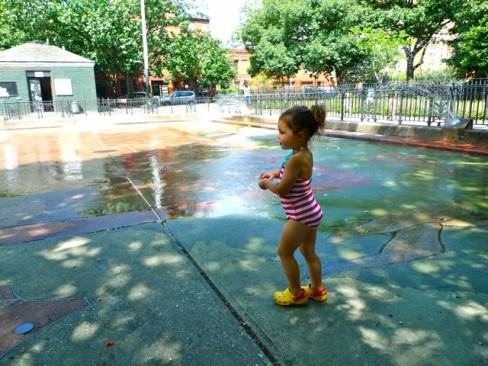 Triple Play
The Underwood Playground in Clinton Hill is a great neighborhood meetup, as well as a cool day trip for families traveling from Greenpoint/Williamsburg, since it’s located directly across the street from the G train (which another park goer and I proclaimed the new “It Train” for Brooklynites). The playground is a traditional beauty with two separate enclosed play areas, one for older children and one for younger tots. A third area boasts a large enclosed rectangular sprinkler run, by far the coolest feature, which allows you plenty of room to clearly watch your children joyously romp through the water. On a hot Tuesday afternoon the park was peppered with just the right amount of kids and parents, and there was plenty of bench space and running room. With the great water feature and both the big and small playgrounds shaded by a canopy of trees, Underwood is a totally chill playground.

Underwood Park is on Lafayette Ave. between Waverly Ave. and Washington Ave. in Clinton Hill 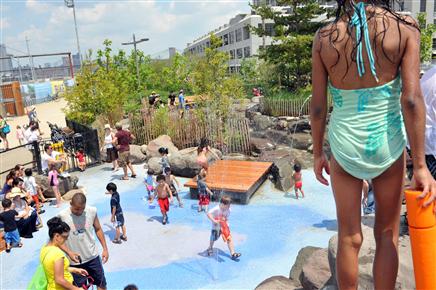 The King of All Playgrounds
If the Pier 6 Playground was a rock star it would be Gwen Stefani—multifaceted, super stylish and outrageously cool. The question isn’t what does Pier 6 have, it’s what doesn’t it have: A chocolate milk bar? A sound system playing gentle indie-rock? Upon entering Pier 6 you have the choice of several play coves. Swing Valley features 10 different swinging experiences from traditional to 6-seated post swings. Sandbox Village offers by far the most massive sandbox we’ve ever seen and keeps kids busy with sand and various climbing accoutrements and play houses. Planked platforms in Sandbox Village are made for tired parents to luxuriate on, but bring a sun hat and sunscreen because Sandbox Village is in direct sun.

The Slide Mountain section of the playground is primarily for older children, as there are some advanced climbing skills needed for many of the structures and slides. While this is certainly a very cool area of the park, there’s hardly any shade and slides get sizzling hot to the touch, so sliders beware! Now for the most mind-blowing cove of Pier 6—the Water Lab, which is equivalent to the coolest club in the city (Le Bain?) for little kids who love to play in uber-designy sprinklers. Because of the Water Lab’s can’t-believe-we-don’t-have-to-pay-for-this appeal, this section of the playground is typically very crowded with parents, kids, nannies and strollers. But the Water Lab is undeniably great, and filled with well-designed and tactile features that make kids squeal with joy. 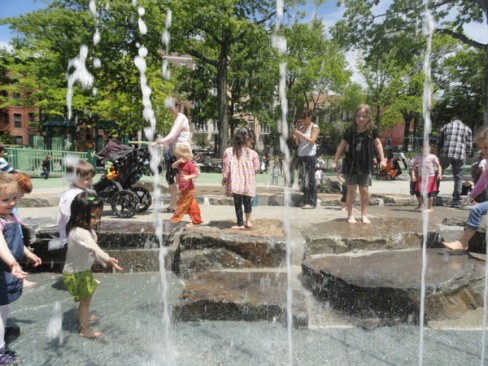 A river runs through the new J.J. Byrne (photo by Will Yakowicz, via Park Slope Patch)

Brand New Fun at the Old Stone House
If the Water Lab at Pier 6 is too much of a zoo for you, take a test run through J.J. Byrne Playground‘s new sprinklers. A stream with fountains that pop up at the press of a button runs through the middle of the park, which has been redesigned with natural features and a tan and light green color scheme that is easy on the eyes. Around the rock-studded stream are play areas that will appeal to all ages: bug-like climbing structures, swings and play houses for big kids and small tots, and tables in back where you can sit and relax near the historic Old Stone House, a reconstructed Dutch farmhouse now surrounded by pretty gardens. The only thing that is not easy on the eyes at this brand-new park is the restroom, which was not renovated. But at least it has one. (photo credit: Will Yakowicz).

J.J. Byrne is at 3rd Street and 4th Street at Fifth Avenue in Park Slope

The Inside and Out Playground
When you can’t bear the thought of spending hours in the sun as your child burns off energy, and an indoor playspace seems too confining on a clear summer day, you can always bring out the big guns and go to the New York Hall of Science, housed in one of the remaining structures of the 1964 New York World’s Fair in Flushing Meadows Corona Park. There, in air-conditioned bliss, you can easily entertain yourself and your kids all day as you make stop motion films in the current animation exhibit, create gigantic sheets of soap bubbles, pitch balls (and measure their speed at the same time), watch 3D films, play supermarket in the preschool play area, or find another of the 450+ exhibits to fool around with.

When you need an outdoor break, head to the Science Playground where there are water features, chimes, and ropes to climb, or the Rocket Park Mini Golf (both a small additional fee to enter). If you’ve got a family membership to the Brooklyn Children’s Museum, general admission and access to the playground is free; otherwise it’s $11 for adults and $8 for children ages 2-17–comparable to what you’d pay at a playspace that would offer a fraction of the fun. Driving is easiest, and to avoid the paid lot, you can find street parking or park at the Queens Zoo down the street (which is larger than Brooklyn’s zoo and also worth a visit). By subway, you need to connect to the 7 train via the G, 2, 3, 4, 5 or F, take it to 111th Street Station, and walk three blocks south. Be sure to visit the nearby Lemon Ice King of Corona at the end of the day; watermelon, peach, pistachio, and sour apple are just a few of their wild flavors.