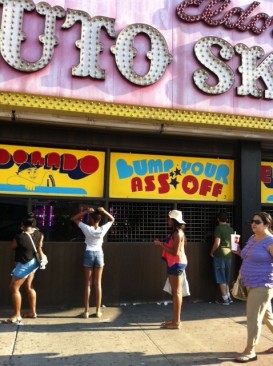 All over Brownstone Brooklyn are conspicuous vacancies: parking spots are open. It’s a sure sign that the beautiful people have spirited away from the stench of garbage juice cooking on the sidewalks, to their country homes upstate or to sunny and sandy shores.

I would do this more regularly, too, if it were more practical. In the summer in the city, all I want to do is get out of the city. A proper vacation is much needed but can’t happen for months, so on weekends that we’re here, the husband and I are left with the same options as everyone else. And those options-whether it’s an outdoor movie, a festival, a concert, a ferry jaunt to Governor’s Island–are always a shitshow. Everything is a shitshow. Weaving through crowds and waiting on lines is hardly conducive to unwinding. To enjoy a lot of these activities, you have to qualify it with your NYC survivor-among-too-many-people brain–“Hey, I carved out 3 x 6 feet of my own space on a sheet on this park lawn with a view of the downtown Manhattan skyline and also a classic movie is showing and I can hear most of the dialogue!” And you hope that not too many people step on the sheet that demarcates your rectangle of land.

Wherever those pristine beaches are that the beautiful people jaunt off to in summer, I can assure you it’s not Coney Island. I was reminded of this when the hubbs and I went there last Sunday, as I eyed the pigeons on the beach and the row of five overflowing wire mesh garbage cans.

Listen, I know Coney is not where the cool kids go. The Siren Festival ended two years ago, and the hipsters have overtaken more fashionable, foodier shores. I went to the ballyhooed Rockaways last year. We drove out to a birthday party held on the fabulous gay beach there, I don’t remember the name but I shall call it Flambuoy Beach, and we didn’t know where to go to find the special food stands, and the party was populated by unfriendly people on pot brownies. (I didn’t even know it was possible to be bitchy on pot brownies, so that was my lesson for that day.)

Rockaway Beach now has the Rockabus, originally $18 for a 45-minute no-frills ride on a school bus. The price has been reduced to $15, and it’s always good to have more people using mass transit, but Rockabus sounds terrible. It’s still amazing to me that I can hop on the F train at Bergen Street and 30 minutes later be at the beach and boardwalk, then walk a few minutes over and be in the Little Odessa of Brooklyn with all of its scary Russian sodas and robust men in Speedos.

I still dig Coney Island, and here’s why. As a New Jersey native, I love a peaceful beach but know there’s also room for honky-tonk boardwalk fun. People complain that Coney has been stripped of its old-school flavor, but there’s still plenty of shady goings-on, and the Cyclone is still there, as is the Wonder Wheel, and the spine-jarring bumper cars and booming jams at Bump Your Ass Off.

They call it “Sodom by the sea,” but I’d say Babel is the more apt Biblical reference. There is a constant din at the breaking waves, a cacophony comprised of squeals and shouts and laughter and chattering in all languages of Earth as well as some newly coined scream pidgins. At times the roar of voices is disturbingly reminiscent of 9/11, only with joy and much less true horror.

Not a single fuck is given about appearance at Coney. Highly questionable fashions are de rigeur, awful tattoos are displayed with pride, and observing these is all part of the entertainment. You see a lot of undergarments, and about 30% of people swimming in the ocean are wearing their street clothes.

In the latest episode of Louie, Louis CK is too self-conscious among the tanned hardbodies in Miami to remain shirtless on the beach during the day in his ginger pale freckled potbellied glory. No such hang-ups at Coney! It’s an equalizer which works on a similar principle to school uniforms. In Catholic grade school, they told us we wore uniforms so there wouldn’t be jealousy and everyone would be on the same level (it worked a little but ignored such factors as, well, all the other factors that cause jealousy). While I am opposed to the slobification and pajamafication of citizens in the public space, everyone looking bad also means that if you have made even a slight effort in your appearance you can rise above the masses.

One fun aspect of the beach at Coney that not everyone knows about is that entrepreneurs walk around selling snacks of mangoes and mystery fruits, churros and beer, though sellers of that last item do not seem as common now as they once were. For a few bucks you can buy a Corona with a fresh lime wedge, from the comfort of your beach towel. It’s not quite a resort with lounge-side table service, but it’s the Coney Island version.

This time, we only spotted one such roving beer vendor, an old lady wearing a men’s short-sleeved shirt that was completely unbuttoned to show her cross-your-heart bra. This sight was still preferable to the topless elderly woman my husband and I witnessed on an otherwise sexy beach in Barcelona. Her leathery pendulous breasts became infamous in our lore, when they instantly seared themselves into our memories. (It didn’t help us to forget when I made an illustration of her in my trip notes, because sometimes I am ten years old.)

It was more quiet on the crucifix-shaped Steeplechase pier, where fisherman and others were covertly taking sips from their one-hitters and threre was a satellite dance party of one older gentleman, echoing to the two traditional versions on the main boardwalk. Someone had a jumbo canister of Tetra Fin goldfish food to sprinkle as a lure and someone had caught a crab, which sat stunned on the boards in a pointy jumble.

It’s always fun, but Coney is best done as a once-in-a-while excursion. A sign is posted on the pier with the heading PUBLIC HEALTH ADVISORY.

Pregnant women, women of childbearing age, and children under 15 years old should not eat fish or eels caught in these waters. Others should limit their consumption of these fish and eels. Some fish caught in New York City waters may be harmful to eat.

Never mind that, because you can eat deep-fried, hopefully non-local sea creatures at the original Nathan’s, which has its antique neon signs and ceramic tile ceilings that you would never see on a fast food joint built today, a staff of international students, and for some reason the menu includes frog. When Nathan’s seems like the healthier alternative to fresh-caught seafood, you know you shouldn’t come here too often.