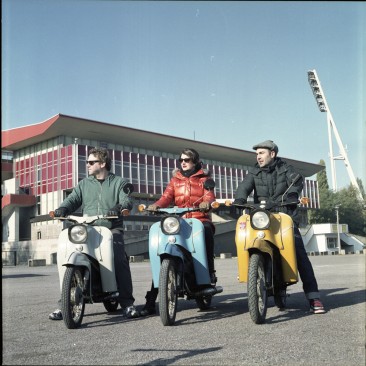 Clare and the Reasons (Big Hassle)

Sometimes a change of scenery is the best way to find fresh inspiration. That was the case for Brooklyn band Clare and the Reasons. In making their wonderful album, KR-51, the Reasons–led by wife-and-husband duo, Clare Muldaur Manchon and Olivier Manchon–opted for Berlin. As Clare, singer for the Reasons explains, they had performed in Berlin before and were left with good vibes from the experience.

“It’s got this thing about it where it’s a really sort of high quality of life and the cost of living is very low,” she explains. “We really wanted to sort of do this great escape and go as long as we could on our American dollars, and be in a place where it’s artistically and historically vibrant. We were supposed to go for four months and we wound up going for eight months. We sort of ran away from America.”

There is no doubt that being in the historic city made an impact on the band – Clare, Olivier and Bob Hart–and KR-51 (named after the model of moped they rode on while in Berlin).  “Maybe I’m wrong, but I think it would be impossible to go anywhere that is unique and has this really kind of Berlin feeling about it,” says Clare. “You can’t sit in your Berlin apartment and not be affected by that while you look out the window and see everything that you see and go about your day. I think every note on the record probably was affected by Berlin.”

For Clare, there are many musical differences between KR-51 and the band’s previous two albums, The Movie and Arrow. “First of all, I would say the record is a lot darker,” she says. “I just wasn’t able to write happy little pop songs, it wasn’t in the cards this time. It is the case for some of the songs on other records, I would say they’re more much of the optimist thing.

“I think because we had such a great opportunity to be in this studio in the village in Germany for nearly three weeks and record and create this sort of sonic landscape all in one room and have it be more based on rhythm section stuff. We didn’t use the orchestra in the same way that we’ve used it in other records. It’s definitely less orchestral record somehow, but the orchestra is used more in a sort of more moody way.”

Aside from such orchestral-sounding pop tracks like, and few that harken back to early Kate Bush (“Bass Face,” “The Mauerpark”), there’s also an  aggressive-sounding track, “PS,” whose initials stand for legendary producer Phil Spector. “Many of the songs are really driven by the rhythm section and the meaning of the lyrics and capturing the sonic attitude of the song,” says Clare, “then if the orchestrations were appropriate, then we put them on; if it seems like an overload, we didn’t do as much. “PS” has some strings at the end, but it didn’t seem like it needed to be cluttered with an orchestra.”

The album’s first single is “The Lake,” which, according to Clare, was a song that came late as KR-51 was being made.” I think I wrote that song–as cliché as it sounds–sitting in a park going back and forth between the apartment and the park back and forth on a beautiful day, sort of doing the music inside and then going out to the park and listening, working on the words and sitting in the grass. I just like the narrative of it. There’s personal little lines in there that make sense to me. It’s sort of a floating kind of song.”

Given her family background, it may come as no surprise that Clare would immerse herself in music—her father is ‘60s folk troubadour Geoff Muldaur, and her sister Jenni is also a musician. The origins of the Reasons goes back to when she and Olivier met at music school in Boston. “Then we met Bob, who’s totally is in the band…he’s the most creative, incredible musician. He came to Berlin like five times when we were there, so we got to work things out with him and come up with a lot of parts. He’s incredible because you can give him the most ridiculous idea that’s really complex, like Could you play this? and he just plays it on any given instrument. It’s a fun process because you know we know all we can push ourselves and I think we all know or we’re learning as we go, when to leave things as simple, to go simple can also be a refreshing thing.”

After a brief spell in Los Angeles, Clare and Olivier relocated to New York, first in the West Village before finally settling in Ditmas Park about six years ago. “I think our real estate agent said she sold 12 apartments in this neighborhood because of us,” she says. “It’s a nice neighborhood and a nice community. I think people just feel a little bit more decompressed out here. There’s more green and it’s really quick to get into the city. It’s a good ‘hood.”

Clare and the Reasons already toured in the U.S. and Europe in the earlier part of the year, and had also performed at the Bonaroo Festival. They’re doing a record release show for KR-51 at Manhattan’s Le Poisson Rouge on Wednesday and may possibly go out on the road again this fall. As for the new record, Clare says: “We hope that this record will gain some momentum and be heard by people. It certainly means a great deal to me. I just want people to hear it. “