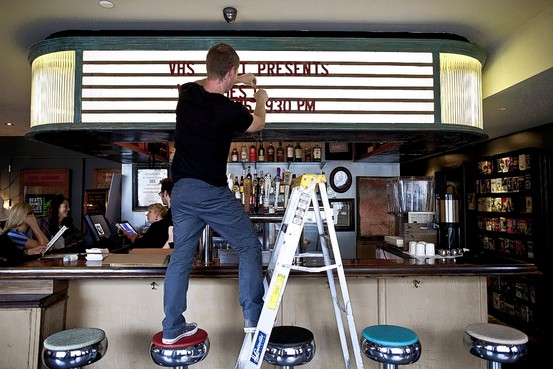 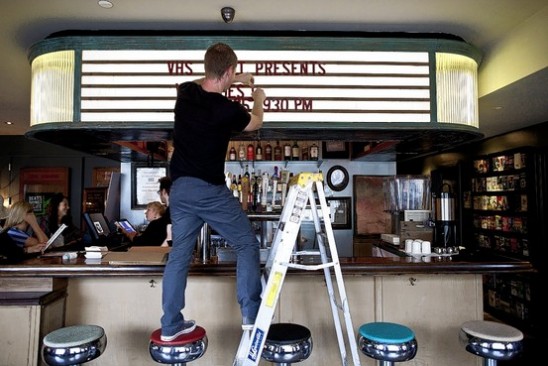 John Woods curates the films, and the marquee, at The Nitehawk.

The Nitehawk movie theater/restaurant in Williamsburg is the one cinema in New York where missing the previews means missing something that will likely enrich your movie-going experience. Whether it’s a short film by a local filmmaker or an obscure public service announcement, the Nitehawk takes its pre-shows very seriously, which isn’t a surprise considering that John Woods, the Nitehawk’s cinema director, is the person who handpicks them.

Film buffs who were in Williamsburg before its biggest gentrification boom may remember Woods from the video store on Bedford Avenue that he co-founded in 1997, Reel Life. The films at Reel Life essentially mirrored Woods’ own movie collection, some of the most obscure and yet enthralling films one could hope to see. I worked there in 2004, and the best days at Reel Life were when Woods was in the store. He’s one of those people with remarkable taste, the kind you want to follow around with pad and paper to write down all of his recommendations. After Reel Life closed, I knew Woods would re-emerge with some kind of important cultural venture.

Among the features that make The Nitehawk a unique and superior movie-going experience is its carefully planned and constructed pre-shows, selected by Woods, his co-Cinema Director Mason Rader and programmer Max Cavanaugh, which start about 30 minutes before each feature. I sat down with John Woods to get the skinny on the method behind his pre-show madness and to understand his curatorial approach to new movies. 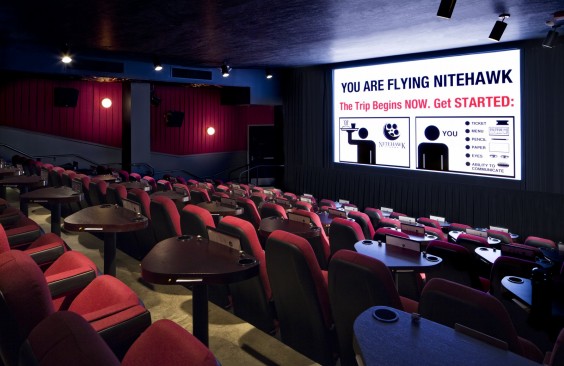 You are flying Nitehawk.

Tell me about the Nitehawk pre-shows. What’s the impetus?
The idea was to show stuff that relates to the feature in some way. Maybe it’s literal, maybe not. But also, we wanted it to function in a way that if you hadn’t seen the movie and you’d just seen the pre-show, it would work as its own stand-alone thing. Our whole goal was for the viewer to already have information about the movie when it starts, whether they know it or not. So, for instance, we showed this Boston Hardcore documentary, All Ages, a few weekends ago. I knew who was going to be there, people who are younger and into the music or my age who were probably there for some of it. That’s more of a straight shot where you can show some nice live footage of some of the bands or some more funny journalistic-type stuff like those old news reports on punks. Then there’s more challenging stuff, like if I haven’t seen the film, I have to just get whatever information I can and find something that relates to it somehow.

You show a lot of short films as part of the pre-show reel, often from local filmmakers. How did that come about?
I judge in festivals sometimes and you see these excellent short films every year. After you do it for a while you realize nobody’s ever going to see these amazing films besides other filmmakers and people at festivals. Unless the filmmaker goes on to make a feature and has a DVD release or whatever, nobody will see it. The days of Jonathan Glazer and Spike Jonze, or Russel Mulcahy making these great shorts or music videos and being able to translate that into features, it’s not really happening like it used to. Jonathan Glazer made a dozen music videos before he made Sexy Beast. I really wanted to bring value back to these shorts. I wanted people to see them that weren’t people at festivals or other filmmakers.

So, did people just start submitting their shorts when the Nitehawk opened?
Yes, and there was stuff that I knew of and requested also. I’m always on the Internet looking, and in a lot of cases I would just reach out to the filmmaker and say “We love your short,” but nobody has ever done pre-shows the way that we do, so it was hard to explain to people like, “We’re a movie theater, but we do a pre-show before the movie starts.” Now people are starting to get it. A lot of people were just like, “I don’t get it. Why?”

The first time I came here I saw this weird anti-smoking/pro-smoking PSA-type thing with John Waters. Where does stuff like that come from?
I just have a large collection of old tapes. The first time I saw that one was on a laserdisc for one of his films, I want to say Pink Flamingos. So I knew it was out there. I know it was shown in a lot of the old New York theaters back in the day.

Tell me about the process of figuring out the pre-show, some of the logic behind it.
If it’s something new, like say, Prometheus, Ridley Scott did hundreds of commercials, so there’s that. Some of them are harder than others, like Another Earth, there’s nothing obvious for that. You’ve just got to think. For instance, if it’s Scorsese then, I’d remember “Didn’t he make a short in college?” or Woody Allen, “Didn’t he do a Candid Camera back in the 60’s?” That’s one of the ways, but sometimes subject matter can drive it. Maybe it’s a first-time filmmaker and not a genre film, just a new drama, it’s not as easy, but that keeps us on our toes.

I saw Young Adult at the Nitehawk and there was this “Best of Charlzie Theron” compilation of clips. Who would do the actual editing work on something like that?
It depends really, sometimes we find stuff someone’s done already, other times we put it together. Montages like that are fun to show beforehand and people really like them. The short films though are what I like the best, and they really seem to have an effect on people.

What are some of the most memorable shorts for you?
There’s one, Transport, with Reggie Watts that we did. It was all shot around here, that was one of my favorites. The Unsane Video for “Scrape”–it’s great to show that. It’s tough to pinpoint but because we do so many of them per week. It’s a lot of work, and it’s a lot of effort but it’s worth it. We’ve had people come up and ask about stuff, a lot of times it’s a piece of music or something.

Give me a bit of background on the Nitehawk and your involvement in it.
Coming at the end of Reel Life, I just didn’t want to do it anymore and people didn’t value video stores anymore. Towards the end, I think the store selection-wise was better than it ever was, but people thought, “Oh I can just download it,” and the aesthetics of the neighborhood changed. So I’d been wanting to do something like this, a movie theater with a bar. I was doing all kinds of jobs to get by and would have all these meetings and the money would come together quick, you’d find out during the last couple meetings that people didn’t really care about movies, they just wanted a cool spot, and I was very dogmatic about it being all about the movies, so it eventually it would come apart. Finally I met someone [owner Matthew Viragh] with the same philosophy as me, that it was all about improving the experience of seeing a movie. After that, everything just came together.

How would you characterize your taste, in terms of your curatorial role at the Nitehawk?
I will always watch the most challenging stuff and then stuff like Lethal Weapon, and that’s how I always curated the video store. I never saw a hierarchy within film and I don’t know why people see it that way.

Then you can also subvert the way people look at film. At the video store you’d have someone who wouldn’t watch subtitles, but you could start them with Wayne’s World 2 and in six months they’d be watching Merchant of the Four Seasons.

I’ll select something for me once and awhile, but usually it’s just about what’s going play. I’m a big fan of Joseph Strick, but if I play one of his movies, nobody’s going to come. You kind of get a feeling of what people are interested in seeing and you go from there. For Reel Life I had to educate myself. There was stuff that I wasn’t personally interested in that I had to learn about pretty extensively. Everyone’s taste is valid. We wanted to do a lot of repertory stuff, so we started doing it for midnight and brunch. Something like Defending Your Life, that works at brunch, but not at midnight. At the same time, we had Street Trash, which is not a brunch movie, you know? That’s how I think of it these days. We can’t really afford to replace a new release to show a traditional art house movie, so it’s brunch or midnight. I had to get creative and think, “What movie would you lay on the couch and watch, but it would be more fun to watch in the theater?” So the first thing I did for brunch was The Breakfast Club and it sold out three shows.

Has anything surprised you either by being super successful or unsuccessful?
Street Trash did incredibly well. It was all shot around here and it was just perfect timing. The best stuff for midnight movies is stuff where you just hear the title and you know exactly what it is, like Frankenhooker. You may not have seen that, but you have an idea.

To submit a short to the Nitehawk, upload it first to their Dailymotion page, then send a link of it to videosubmit@nitehawkcinema.com. Find more details on their submission policy here.