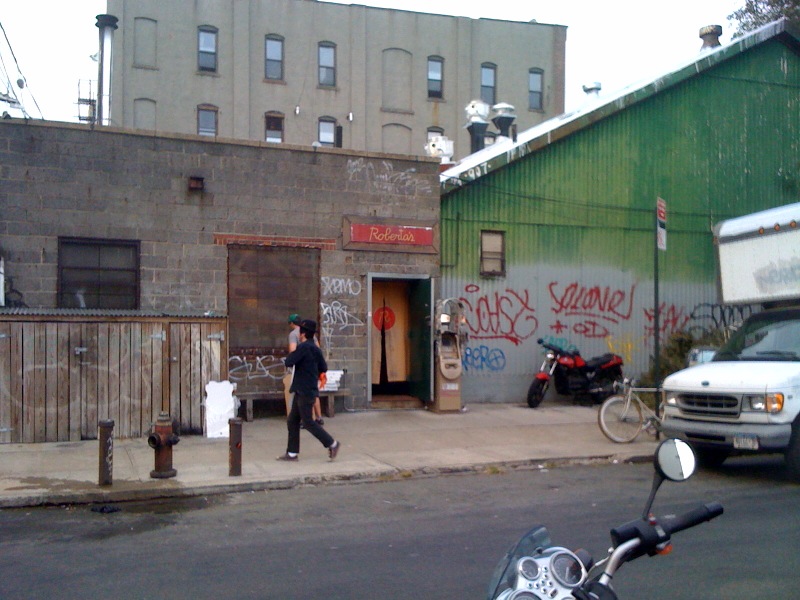 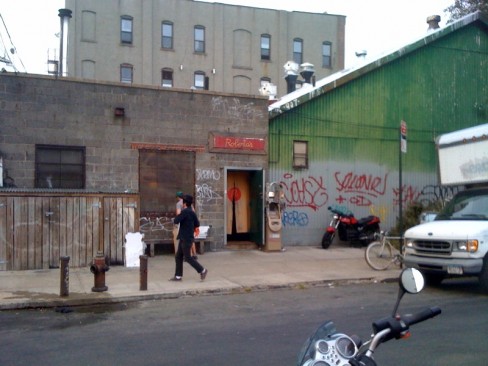 When you think of Roberta’s, you think of Bushwick, right? Even if you’ve never ventured to this darling of the New York food press, it’s the one spot that everyone seems to know and identify with the neighborhood.

But technically speaking, Roberta’s is not in Bushwick. The historic boundaries of the neighborhood include Broadway to the south, Flushing Ave. and the Queens-Brooklyn border to the north and east, and all the way east to Evergreen Cemetery. (Read about the boundaries of East Williamsburg in “Neighborhood Name Police.”)

In the last decade or so, however, many locals agree that the boundaries have crept further and further north, putting Roberta’s and stops on our Bushwick Immersion like Pine Box Rock Shop and Brooklyn Fire Proof East in a nebulous area that’s now popularly known as Bushwick.

As BushwickBK founder Jeremy Sapienza told us by email, “How I and most others define Bushwick safely includes East Williamsburg south of Johnson and east of Bushwick Avenue in addition to the “official” areas. Others would add to this the projects (Bushwick/Borinquen Houses) and the area within 3-4 blocks of the Montrose stop. Still others would extend it to the area east of Bushwick Ave. between Metropolitan and Grand but that’s pretty classically Italian East Williamsburg.”

“And then some people consider the Wyckoff Heights area — roughly St. Nicholas between about Myrtle and Flushing, and often more narrowly between DeKalb and Myrtle — to be Ridgewood, even though it’s in Brooklyn. And of course at various times RIdgewood was considered to reach Wilson or Central Avenues, depending on whom you ask.”

To help us figure out how the blurring of Bushwick’s borders came to be, we emailed artist Chloë Bass, the co-lead organizer for Arts in Bushwick, which produces Bushwick Open Studios, and a very active, involved Bushwick resident (before she moved to Bed-Stuy), for her take. This was our exchange:

What year did you originally move to what is now popularly known as Bushwick? I’m assuming you were in the Bogart St. area (near the Morgan Ave. L Stop).

In fact I wasn’t in the Bogart area! I was over on Jefferson Street, which is solidly on the Bushwick side of things. I moved there in February 2007, but I’d been rehearsing work at Chez Bushwick (near Morgantown/the Bogart area) as early as fall 2006.

Do you have a sense of when the Bogart area became commonly considered part of Bushwick?

When I first started coming out to Bushwick to rehearse, and eventually to live, I already had a sense that Bogart was considered Bushwick. At that time, it was really one of two hipster hubs, the other being Wyckoff between Troutman and Starr (the block bookended by the Wyckoff Starr and Northeast Kingdom). Bogart in 2006 was still the Archive, Ad Hoc, Brooklyn’s Natural (which is still there), and possibly one or two other things that I’m forgetting. No Momo Sushi Shack, no Roberta’s, no 56 Bogart “gallery building.” But the 56 Bogart/1 Grattan building did have studios in it, and it was known as one of the better studio buildings in the area.

Were you aware when you moved to Bushwick that it was not within the technical boundaries of it?

Since I did technically move to Bushwick (on the proper Bushwick side), it took me a while to learn the real boundaries of Bushwick itself. Doing Bushwick Open Studios and getting involved with Community Board 4 was really what alerted me to the distinction. Also keep in mind that in 2006/2007 (and even 2008), even “proper Bushwick” was getting real estate billing as “East Williamsburg” so that landlords could hike up prices and attract a different demographic. What really became interesting was when calling something Bushwick actually gave it cool points such that even locations not in Bushwick were getting a Bushwick billing on Craigslist etc.

Did the boundaries make a difference to you?

Boundaries and mapping have always been important factors in considering the growth of Bushwick Open Studios, and Arts in Bushwick’s other two festivals, BETA Spaces and SITE Fest, were specifically kept geographically smaller to make them more accessible and cohesive. That having been said, we’ve certainly always included the Morgantown area in our events. But we’ve also included Graham Avenue. And places on either side of the Myrtle J/M/Z stop. So maybe we’re not the best people to ask for definitions.

And do you think the technical demarcation is valid anymore, now that so many people consider the Bogart area Bushwick?

For me, it really does matter, and here’s why: I think that Bushwick gets a disproportionate amount of press devoted to the artists, galleries, and restaurants in the area (often for good reason, but not always), and part of that is due to the labeling of Morgantown as Bushwick. The rest of Bushwick — the vast majority of the neighborhood both geographically and population wise, not to mention demographically — is not facing the same kinds of gentrification benefits as the Bogart area. There’s a far more diverse population and there are a much wider range of urban issues at play. I don’t know if separating out the Morgan area is necessarily going to draw more press to the “other Bushwick,” but I think it would be an interesting exercise to see how Bushwick was perceived if the Bogart area wasn’t part of it.

I would add that knowing real neighborhood boundaries is an asset if you’re trying to interpret any legislation about your neighborhood. Assuming that a change in Morgantown is a change for the rest of Bushwick may be legally untrue, whether the change is positive or negative. So associating that as the essential Bushwick is problematic for a bunch of reasons.

In fact, your totally reasonable assumption that given who I am and what I’ve been doing, I must have lived in the Morgan area, actually points to what I was saying. We associate a certain — and now exemplary, if not canonical — thing about Bushwick with an area that actually isn’t Bushwick. And isn’t representative of a lot of Bushwick.