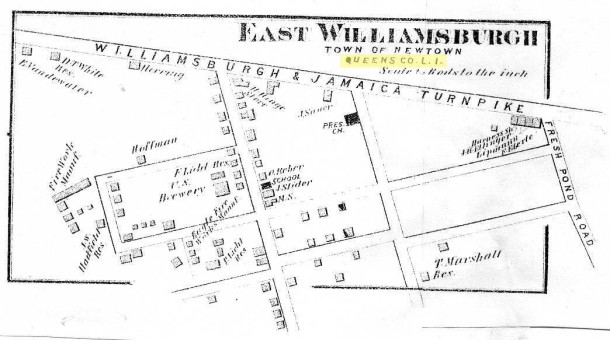 Would a neighborhood by any other name smell as sweet?  Or would apartments cost as much?  It’s a touchy question to put to residents of Williamsburg, Bushwick, and—depending on your politics—East Williamsburg.

A cursory glance at the comments following an article with even the briefest mention of East Williamsburg reveals how easily the moniker stokes passions. Just note the vitriol in this response to a Gothamist article about a biker gang:

“East Williamsburg is a fiction sold by real estate agents, owners and marshmallow transplants who desperately want to tell people they live in Williamsburg.  Don’t believe the gentrification hype.”

So how are neighborhood names born, rejected, codified, vilified or finally accepted?  What’s at stake in the process?  Is East Williamsburg an actual place, or is it merely the twinkle in a broker’s eye?

New York is not a city that has official neighborhoods or neighborhood boundaries, so area names often become tools in the hands of city planners, developers and community groups.  Some neighborhoods are enshrined as historic landmark districts, such as Vinegar Hill, but those with no officially recognized status can be contentious.  “It becomes possible to imbue neighborhood names with a lot more meaning than if those boundaries were laid down in an official way,” explained Julie Golia, public historian for the Brooklyn Historical Society.  “It can come to represent ethnic or racial strife, and gentrification.” 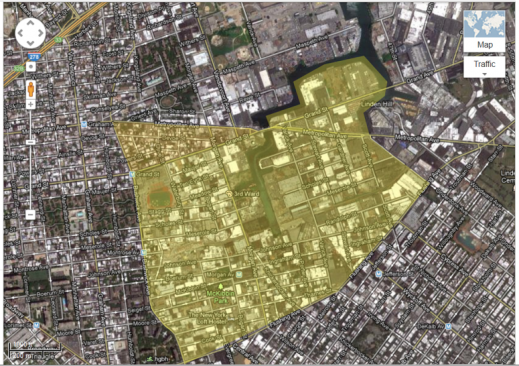 What has come to be referred to as East Williamsburg is an arrowhead-shaped area bounded by Flushing Avenue (with Bushwick on the other side) to the southeast, Bushwick Avenue to the west (though many folks who live on Graham Avenue, even some as far west as Union Avenue, consider that East Williamsburg) and Metropolitan Avenue to the north. It includes the East Williamsburg Industrial Business Zone, an irregular tail on the top of the arrowhead comprised of heavy industry around the terminus of Newtown Creek, and even a few of the stops on our Total Bushwick Immersion with Brooklyn Brewery.

Whether this is a real neighborhood depends on who you ask. According to John Manbeck, author of “Neighborhoods of Brooklyn,” East Williamsburg is a developer’s gentrification, just as Coney Island was renamed West Brighton in the late 1800s in an effort to sell homes in what was considered a seedy area.  “In the future, you may find Brooklyn splintered into 200 to 500 neighborhoods, none of them official,” he said.

This codependent phenomenon of gentrification and creative neighborhood names is nothing new in New York City.  As recently as the 1950s, Cobble Hill, Carroll Gardens and Boerum Hill didn’t even exist; they were collectively referred to as South Brooklyn.  In this particular case, Golia said, brownstoners created the names in the interest of rebranding the neighborhood.

On the flip side, neighborhood names can also fall out of fashion and quietly drop from use.  The notoriously lawless Pigtown, described by The Brooklyn Eagle in 1902 as “a lowland of romancing pigs, goats and shanties,” is now known as Prospect Lefferts Gardens and East Flatbush.  Former New York Mayor Rudolph Giuliani called Pigtown home until age 7, when his family relocated to Long Island.

“The way I see it, New York City has been—and still is—in a constant state of flux,” said Heather Letzkus, proprietress of the Greenpoint-based blog NewYorkShitty.  “As populations change, so do the neighborhoods they call home.” Real estate agents certainly take advantage of this fluidity, and as Letzkus explained, they often stretch a neighborhood’s boundaries the same way they stretch a renter’s budget.  “If someone says his or her budget is $1,000 per month, the broker will assume it is actually $1,200,” she said.  “As for neighborhoods, if you say Greenpoint, you may very well be shown an apartment in Ridgewood.”

The term East Williamsburg though, wasn’t invented by real estate agents. Originally, in fact, it wasn’t even located in Brooklyn. The earliest mention of the neighborhood, then part of the Dutch Newtown settlement, is found on maps dating from 1783 in the western chunk of what is now Ridgewood, Queens. Later, what some would call East Williamsburg today was home to a neighborhood known as Cripplebush, located roughly where Flushing and Nostrand Avenues intersect.

Pinpointing exactly when the name East Williamsburg came on the scene in the modern sense is tricky, but the commonly held belief is that the moniker was part of common parlance by the 1990s.  “I recall seeing an article on ‘East Williamsburg’ in the Times as early as 1986,” said Golia, of the Brooklyn Historical Society. (There are multiple reference to “East Williamsburg” in The Times’ archives from the mid- to late-1800s, then the term re-emerges, as Golia correctly remembered, in 1986.) “I don’t know about a particular event that took place that prompted the use, but you could trace Williamsburg’s most embryonic gentrification roots back to the 1980s or early 1990s.  That’s certainly a part of it.”

Another influence could have been the establishment of the East Williamsburg Industrial Business zone, created in 1982, and certainly not with the goal of selling luxury condos. Michael Rochford, its executive director, said that he and colleague Henry von Dam simply made up the moniker.  “We needed to distinguish between South Williamsburg, Southside, Central Williamsburg and the Northside,” Rochford explained.  “I never heard it used before then because up until the 1980s, it was considered Bushwick.”  Rochford said that the redrawing of the community board district lines in the late 60s and early 70s likely also played a role, but that he continues to be surprised that the term now identifies such a broad portion of the neighborhood beyond the industrial business zone boundaries.

“I really think the ‘East’ isn’t meant as anything more than a general orientation,” Jeremy Sapienza, founder of the blog BushwickBK, explained by email. “It’s simply the eastern part of Williamsburg, which is pretty large and I think earns such a designation.” Williamsburg has a Northside and Southside, after all, neither of which seem to draw much attention from the neighborhood name police. “I live in Williamsburg. The east part. It’s not really seen as separate, but then that again depends on the times, the community, the individual you ask.”

Things get even fuzzier when you include Bushwick in this discussion, which technically stops at Flushing, but in the last decade has enveloped a section around the Morgan Ave. L stop–what some locals now call “Morgantown.”   “Once I cross Johnson, I have a hard time saying something is in Bushwick,” said Sapienza.  “I won’t be annoyed if someone else does, at least until they hit Grand. Then you’re in East Williamsburg.” (For more on the Morgantown boom and the consequences of name-brand neighborhood recognition, check out this BB interview with Chloë Bass, co-lead organizer for Arts in Bushwick, which produces Bushwick Open Studios.) 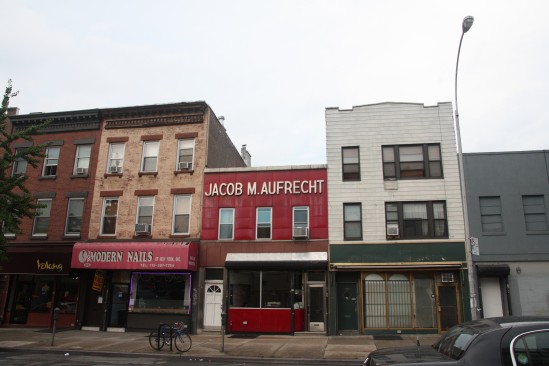 Are these buildings along Graham Avenue in East WIlliamsburg? Local opinion was split.

On a recent stroll down Graham Avenue–an area many would solidly identify as East Williamsburg–local takes on the contested neighborhood varied widely, perhaps predictably.

“To me, Williamsburg is Williamsburg,” said Phil Camporese, 43, who owns a hardware store at the corner of Grand and Humboldt and has lived in the neighborhood all his life.

Others agreed that the neighborhood exists, but didn’t have a concrete sense where it begins and ends.  “East Williamsburg is definitely a real place,” said Anthony Santangelo, 41, a co-owner of Fine Wines and Liquors on Graham Ave.  “But if you were to ask me the exact boundaries, I wouldn’t be able to tell you.”

It seems the only final word on a neighborhood name, and its boundaries, comes from a designation as a National Historic District. Cobble Hill, Carroll Gardens, Boerum Hill and even Greenpoint all have landmarked historic districts.  East Williamsburg, on the other hand, will likely never receive that kind of distinction, due to the number of industrial buildings and older factories mixed in with structures of more conventional historical interest.

“There is absolutely a case to make for East Williamsburg landmark status,” said Golia.  “Probably the primary argument is its fascinating industrial history.  It could totally happen, but it’s easier to pitch a neighborhood with fine architecture and a rich cultural history than one where people might see rundown buildings.”

In the end, whether an area is called Cripplebush, Pigtown, Bushwick, or East Williamsburg, the real measure of a community is the relationships between people who live there. “If you love where you live, have neighbors who know you, support you and take care of you in times of need, who the hell cares where the place is or what it’s called?” said Letzkus.  “It’s simply home.”