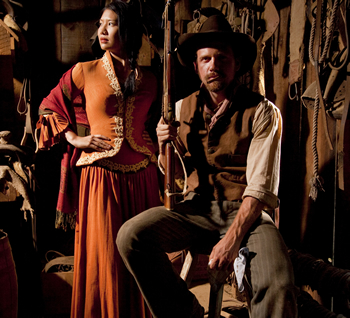 When Los Angeles film director John Douglas Sinclair decided to make his first feature film, Heathens & Thieves,  it became clear quite early into the process that Heathens’ success hinged on wrangling the right cast and crew. Amongst his A-team was composer Sean Ferguson, who wrote the score for the film and also oversees the LES Heritage Film Series in Manhattan at the Seward Park Library, where he’s a librarian by day.

“Ferguson did an amazing job,” says Sinclair, during a phone interview this afternoon from Port Jefferson, where he was sitting outside a vintage shop waiting for members of his cast and crew to finish shopping, having all reconvened in Long Island to participate in a discussion panel following the film’s first screening tonight at the Stony Brook Film Festival. A special preview exhibition of Heathens’ will aslo happen tomorrow night at 8pm at IndieScreen in Williamsburg, close to Ferguson’s Greenpoint home. “I’ve known [Ferguson] since we were in high school, and he nailed it. He and Isaiah Abolin, the music mixer are both based out here, and the musicians they gathered to record were all New York based. That’s one reason we’re screening in Williamsburg–because they have their own network of New Yorkers that have been waiting to see this.”

Not a huge Western fan before writing Heathens, Sinclair says he drew inspiration for the film both from Westerns like Sergio Leone’s Man With No Name series and from film noir–The Postman Always Rings Twice, Double Indemnity–creating Heathens as a cross between the two film genres.

“Our vision from the beginning was not just to make a straight, classic Western, but to make something that mattered now to us, and Noir seemed the best way to approach that and the most interesting,” Sinclair says. “I felt like we all have Westerns in our blood, if we’re raised in this country. We all know something about Westerns, even if we’re not Western fans, and so I just thought, if I do something simple–a bunch of people after the same thing, which is gold in this case–what makes it interesting?”

In Heathens, interest lies in the exploration of the Western, Chinese-American experience unfolding in Northern California following the gold rush of 1849; a time when, according to Census data Sinclair discovered in his research, the occupation of the vast majority of Chinese-American women in the region was listed as prostitute.

“That says a lot about the experience of the Chinese-American woman,” Sinclair says. “The Chinese were such a huge part of California’s history, and yet you almost never see them represented as such in any of the old Westerns, or any of the new Westerns. You always see them walking across some town street with buckets over their shoulders, or something, and that’s about it.”

The plot of Heathens revolves around Kun Hua and Zhen–a land-owning, seemingly well-off Chinese couple, though the origins of their, for the time period, a-typical prosperity are enough to raise interest and eyebrows. In fact, it’s a rumor that their wealth stems from stolen gold that sets Heathens’ story in motion by attracting bands of lawmen, drifters and hired guns to their doorstep in hopes of stealing back their fortune.

“Every Western, in a way, is a reinvention and reflection of what’s going on with the culture at the time,” Sinclair says. “In the past few years, we’ve been going through anxieties over China once again, economically and over immigration. Without hitting them hard on the head, we weaved them into the tapestry as the backdrop for what was going on with these particular characters. For me, if it was worth reinventing at all, it was worth exploring something that hadn’t been explored, and that was the Chinese situation. I did watch Thousand Pieces of Gold, and I did watch Broken Trail, and those were really the only two films that I had for that.”

Sinclair knew taking on the racial undertows of this particular bygone era in American history was a task that required the right cast. It took him nine months to compile it. “It was not easy,” Sinclair says. “Part of it is that casting is so important, and if you settle for the wrong person, it really blows the whole movie, so we really needed to find the right people.”

Foremost in their minds was finding the right female lead, Sinclair says. Ultimately, the role went Gwendoline Yeo. “We were lucky enough to get to Gwendoline through a mutual friend, and then Gwendoline brought us Don Swayze.”

That surname is no coincidence. Don Swayze, who plays Colonel Sherman Rutherford in Heathens, is indeed the younger brother of Patrick Swayze, who passed away during the summer break in Heathens’ production schedule, which was filmed over the spring and fall of 2009. Sinclair says it was his older brother who encouraged Don Swayze to take the part in Heathens.

“Don Swayze is just such a master on screen,” Sinclair says. “We knew the second we saw him that he was right. Don was up there full of anger and full of rage over what was going on with Patrick, and he said that his performance was kind of therapeutic for him.”

Swayze will be on hand tonight at Stony Brook alongside Sinclair to answer questions about the film. Heathens & Thieves screens at 9:30 pm tonight at the Staller Center for the Arts at Stony Brook University on Long Island.