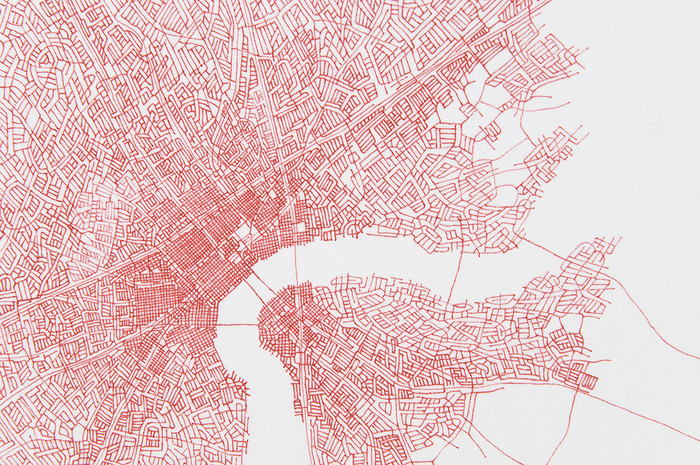 While the art world can be quiet in Bushwick during high summer, there are still plenty of galleries in the various art spaces around the neighborhood with intriguing exhibitions to visit during this Saturday’s Total Bushwick Immersion–it’s always easier to talk about art after you’ve had a few half-pints, after all. Here’s our Bushwick gallery guide for the weekend: 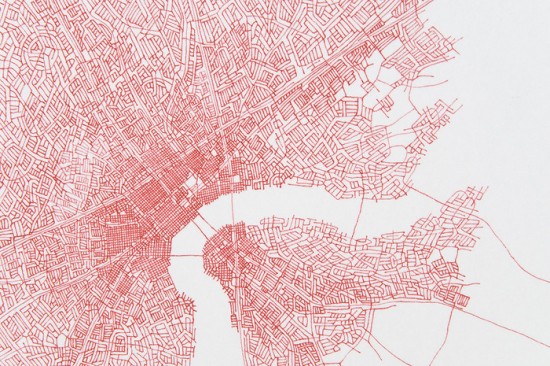 Robert Henry Contemporary: 56 Bogart Street, open 1 – 6 pm
Current Exhibit: Mapping the Equivocal (through August 12, 2012)
Amateur cartographers will want to stop by Robert Henry Contemporary, a recent transplant from Park Slope where it was named RHV Fine Art, for Mapping the Equivocal. Phillip Buntin, Derek Lerner, and Robert Walden are all working with the idea of maps and how they chronicle space. Buntin accumulates biological symbols in enamel on Plexiglas, muddling their meaning in the layers, Lerner looks at modern over-consumption, and Walden plots bird’s eye views of fictional cities. The gallery, like NURTUREart, is in the major Bushwick arts complex at 56 Bogart Street, which also houses Momenta Art, Interstate Projects and lots of other organizations and artists. 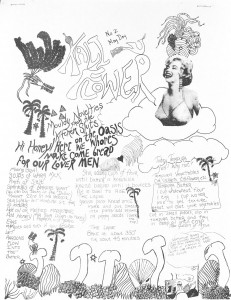 NURTUREart: 56 Bogart Street, open noon – 6 pm
Current Exhibit: …Is This Free? (through September 22, 2012)
…Is This Free? at NURTUREart, an established nonprofit gallery that concentrates on emerging curators and artists, actually involves consecutive exhibitions, all curated by Marco Antonini. In each exhibit the work is designed to be something that can be distributed free of charge, and then next opening for the series will be on August 3. Lawn School, curated by Megan Snowe and Rachel Steinberg, is another element to the exhibit, and offer free outdoor classes throughout the city, as well “…Can I Take This?,” a bookshelf filled with free printed materials and publications, which Snowe curated. Artists in …Is This Free? include Lotte Van Den Audenaeren, Becca Albee, Shinsuke Aso, Daniel Bejar, Cody Castro, Carrie Dashow, Detext, Eric Doeringer, Don Edler, Emcee CM, Vikenti Komitski, Cesare Pietroiusti, Daniel Seiple, Elisabeth Smolarz, Radek Szlaga and Honza Zamojski, Elaine Tin Nyo, Julie Torres, Brad Troemel, Jirí Thýn, and Patrick Tuttofuoco. 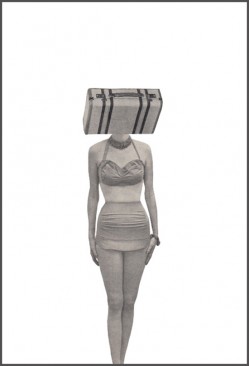 Norte Maar: 83 Wyckoff Avenue, #1B, open by appointment
Current Exhibit: Beyond the Bedroom (through August 2012)
All of the work in Beyond the Bedroom is from the collection of Jason Andrew, a long-time arts advocate for Bushwick and director of the nonprofit organization Norte Maar–it’s also being shown in his apartment, which doubles as an exhibition space. He lets the work, previously all displayed in his bedroom, sprawl into the whole space with a group show that includes artists like Bjoern Meyer-Ebrecht, Cathy Nan Quinlan, Julie Torres, Hermine Ford, Man Bartlett, and Sharon Butler, as well as some pieces from his zine and historic dance photography collection. The exhibition is by appointment only, but worth arranging the visit for the impressive collection by someone who has been integral to the development of the Bushwick arts scene. Call 646-361-8512 to schedule.

Wayfarers: 1109 Dekalb Avenue, open noon – 6 pm
Current Exhibit: Two Become One (through August 5, 2012)
Stop by Wayfarers for their current group show of RISD MFA painting students, then stay for the three films in their evening Closer screening, curated by Danny Powell. The current exhibition, Two Become One, curated by Joshua R. Edwards and Jesse James Arnold, has work from nine artists, with Lauren Comito showing a wall-sized video landscape, Joe Bohynski having cut a hole in the gallery wall and installed a “digital parasite” that feeds from the space’s electricity, and Zach Seeger exhibiting broken canvases stitched back into disjointed pieces. Closer at 7pm will include the films Far and Away the Road Goes Winding (2012), My Dear Daughter of Okayama (2008), and Of Birds and Boundaries (2011) about a Hasidic man who yearns for freedom and finds it through craigslist, and will be followed by a Q&A with directors Benjamin Schultz-Figueroa and Annie Berman. 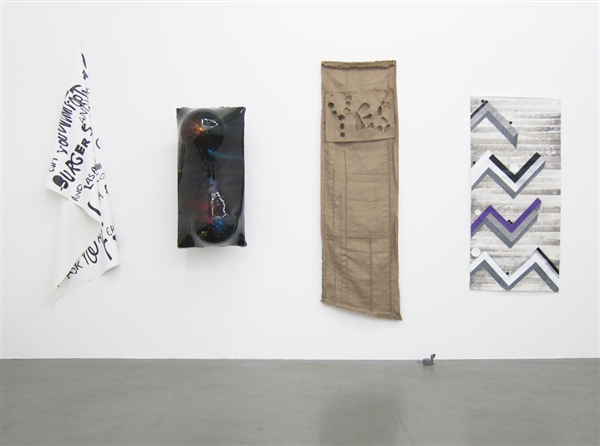 Regina Rex: 1717 Troutman, #329, open noon – 6 pm
Current Exhibit: Practices Remain (through August 26, 2012)
Regina Rex, and the rest of 1717 Troutman, which bustles with studios and creative organizations, is technically in Ridgewood, but it is so linked in with the neighborhood’s art scene that it is essential to stop in the towering building during any Bushwick gallery wander. Practices Remain is a curious show, in that the roving exhibition that started in Miami was organized not to display completed pieces, but instead to show the strange time before a painting is considered “done.” All the works by the 12 artists in the show hovers in a sort of limbo before the finishing touches maneuver the pieces into something final. The openness in showing this process is interesting to see, and a rare chance to contemplate just what makes a work complete in a gallery setting.