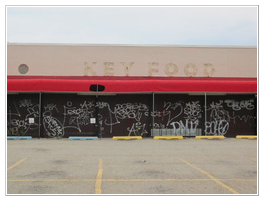 UPDATE:  Elected officials and local residents are conducting a protest tomorrow morning, August 1, at 10am at the site of the soon-to-be open Walgreens (589 Prospect Ave.)  Fresh Facts About Walgreens will be available for distribution, and posters and other visuals like buttons and signs will be available to the media.

On June 16, Windsor Terrace’s one supermarket—Key Food—shut its doors for good.  The property owner signed a long-term lease with the Walgreens drug store chain (the details of which, we’re told, are being kept tightly under wraps), though there are already two independently owned pharmacies in the area.  Members of the community were horrified and began meeting with local elected officials to see what could be done.

They joined forces with local elected officials and met with Walgreens executives on June 27 to present their two big demands: terminate your lease with the property owner, or work with him to reach an agreement that would allow for both a Walgreens and a full-service supermarket on the site.  Walgreens executives rejected both requests. 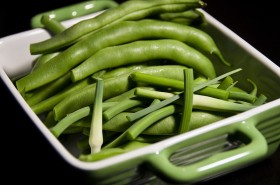 But the community isn’t giving up so easily.

They created a neighborhood group called Green Beans not Walgreens to help organize and communicate with neighbors and supporters.  They are calling for locals to sign a petition that reiterates their demands, and promises a boycott of the proposed Walgreens store in Windsor Terrace if the store continues to dismiss them.

We caught up with Steve LeVine, a neighborhood resident and member of the Kensington/Windsor Terrace Neighbors and the Windsor Terrace Alliance, to learn more about what the closing means for the community and what Green Beans not Walgreens hopes to achieve.

Now that the Key Food is gone, what is the next closest supermarket for Windsor Terrace Residents?
The closest is one mile: Food Town in Kensington or the new Key Food in South Slope.  But a mile for someone elderly, especially when he or she doesn’t have a car, is a big issue. 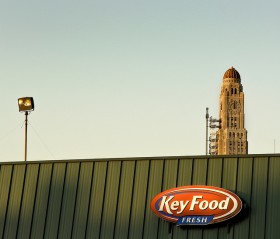 This Key Food, on 5th Ave. in Park Slope, is frustratingly beyond the reach of elderly residents who struggle with mobility and don't have cars.

How are they getting by in the meantime?
Brad Landers worked on trying to form different ride shares, but I don’t know how successful that’s been.  People collected lists of markets around the area that do delivery.  Early on Fairway started a shuttle service going from the old Key Food basically twice a day, and they are still doing that but kind of want people to call ahead of time and schedule it.  There is another committee looking into the viability of setting up a Windsor Terrace Food Co-op, getting assistance from the Park Slope Co-op, but that’s a longer-term solution.

Why did Walgreens say they rejected the idea of having a full-service supermarket on the site?
Their answer was that a supermarket is not their business model. But we pointed out that in Windsor Terrace, they are in unique situation. Yes, normally groceries are low-margin items, but here you practically have a monopoly.  The community is telling you that we want a supermarket; we’re going to shop there.  The lease doesn’t allow for any sort of sublet, they say. We said as far as zoning, they could probably add a second floor without much issue, or there is a huge parking lot where another building could be put in, but they claim the lease.

Is that the fundamental problem do you think, this mystery lease?
Probably not.  If they really wanted the lease to change, I can’t see why Mr. Gellar wouldn’t change it because he doesn’t care, he doesn’t want it on his head anymore.  He wants the money that they’re able to give up front.

Why do you think it’s an attractive location for Walgreens, if the market is already saturated with two other drug stores?
I can speculate that Walgreens thinks that two pharmacies in an area is not a saturation compared to what they can offer, discounted prices or whatever.  They have already said it’s not going to be a 24-hour operation, but their hours will be more extensive than either of the two independently owned places.  I gather that a lot of these types of businesses look at this as signing a 20-year lease for this piece of property.  It doesn’t matter what we make in the meantime.

If this is their mindset, do you think you will reach your goal, or that a boycott would be successful?
It’s possible, but we don’t know how seriously they’ve taken it.  It seems like they’ve met with this in other communities, and almost always swat away flies knowing that it’s a small amount of people making noise, and after they’re open a few months the same people who say they’re not going to shop there are going to shop there.  To be honest, that’s probably true.  Realistically I don’t think we’re going to draw up that kind of support where we’re going to impact them as a company.  In this location, who knows what’ll happen, if they see not getting any business in there?

How did Walgreens’ respond to the petition and the boycott?
They haven’t been officially presented yet with anything in terms of boycott or petition yet.  They kind of know what’s going on, people have written emails and letters to the CEO and the president.  We’re starting to put together all of petition and boycott signatures, figuring out a way of presenting that to them and showing them look, we have over 3000 people who are against this.  The population of Windsor Terrace is maybe a little over 5000.  You have a good chunk of the neighborhood that doesn’t want you here and that is not going to shop with you.  Give us what we’re looking for and we’ll be more than happy to give you the business.