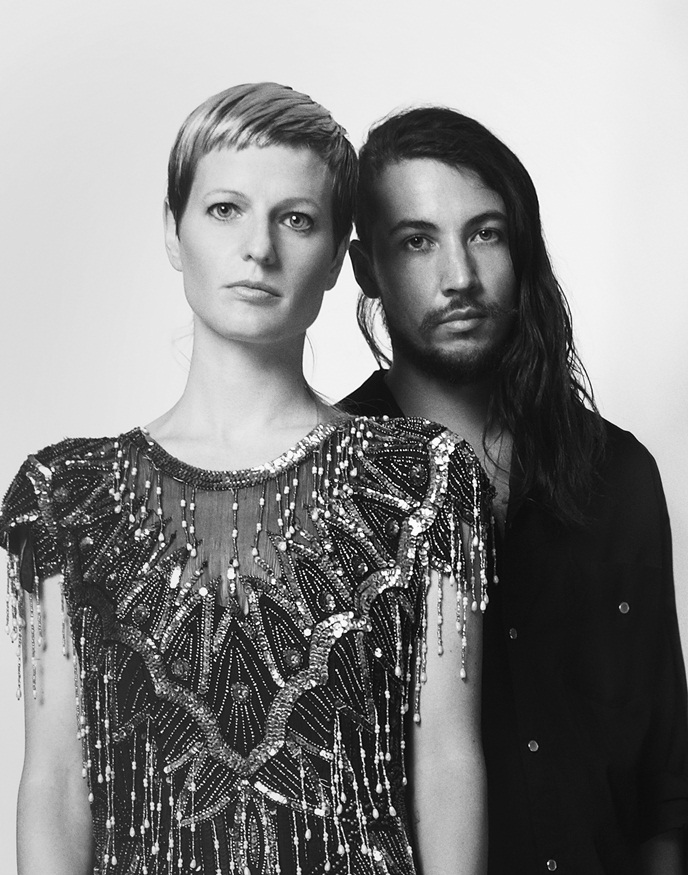 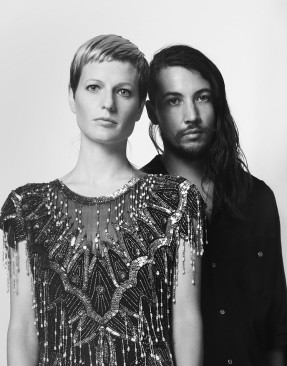 She’s an artist who makes prints and calendars. He’s a guitarist who has played in heavy metal bands. Despite their seemingly different backgrounds, the wife-and-husband duo of Kim Krans and Jonny Ollsin make stunning music together as Family Band.  Hailing from upstate New York, these former Williamsburg residents craft subdued indie pop that belongs in the same sentence as the likes of Mazzy Star and Beach House.  The duo is readying the release of their brand-new sophomore effort, Grace and Lies, which follows their 2010 debut, Miller Path.

“It’s kind of a merging of both of our interests,” says Kim. “I was more into minimal, songwriter super-waltz type of music, and then he was into all these heavier, thrash and metal bands. It was sort of complicated on our first record–you can hear that not quite melding yet, those two different styles. But I feel like on Grace and Lies we both were less self-conscious or protective of the worlds that we came from. It felt more of like a melding in this record.”

Grace and Lies is atmospheric and melodic, highlighted by Kim’s melancholy singing and Jonny’s hypnotic guitar lines (his guitar work on the tension-filled song “Lace” hints of a bit of his heavy metal past).  While its music is dream-like, Grace and Lies carries a dark undercurrent lyrically throughout the record. “There’s a lot of doubt and I guess pending fear or anxiety on the record, just lyrically,” says Kim. “Most of that comes from a loving place. I would say if there’s a fear and anxiety, it’s about losing that you love so much… So that’s kind of the theme. It is dark but also underneath it just trying to figure out how to hold on to things that you love [in] a world that’s super complicated.”

The album’s first single is the exquisite “Night Song,” which Kim says came together when she and Jonny were at their cabin that they built themselves. “Johnny had that riff that threads throughout the whole song. He just kept playing it over and over and I just started singing over it and worked through a bunch of different lyrics. It’s about our cabin and having really amazing experiences up there.”

In true DIY spirit, the video for “Night Song” was directed by Kim herself–it features drawings superimposed on her face. “I don’t want to think about how long it took me,” she says with a laugh. It was a lot of hours adjusting the drawings to fit really perfectly on the face.  It felt like a high budget than a really earnest thing. It was supposed to stay loose and kind of punk and be funny but also have a lot of impact at certain parts of the song. It was a balancing act of a bunch of different qualities, but it was so fun to make.”

Another highlight of Family Band’s new record is the outstanding and lovely “Moonbeams,” a track that Kim describes as the tearjerker of the record. “It was a song I wrote on my own. I think I wrote that one fairly quickly too. That song is just about trying to communicate well with somebody that you love, again, just trying to hold on. I think we all spend so much time in our culture trying to find things we love and get things or buy things   that we love, and no one talks about the work that you have to do once you have those things. The song is kind of addressing that side.”

Kim sings like a seasoned professional even though she started out as an artist. She says she had sung before in bands but didn’t really get serious about it until she met Jonny several years ago in upstate.

“When we met, I found myself playing more and more music. We built a cabin together upstate and we played a lot of music that summer. After that, we started taking the band more and more seriously. And the band is a cool opportunity to do a bunch of visual things.  I still get to direct and make music videos and make costumes for music videos and make the flyers and album artwork. It’s almost like a platform for all types of artwork in a sense.  It’s really fun.”

Kim and Jonny also have a website called The Wild Unknown that she says serves a hub for people to see her artwork and for selling the band’s merchandise. She adds:  “It’s fun to make drawings and T-shirts and stuff like that, but it’s really exciting to think about a live performance and a music video, and different levels of production. We just finished a music video (for “Moonbeams”) with costumes and all sorts of set design. It’s so exciting I think for both Jonny and me.”

Following the Union Pool show tomorrow, there’s a possibility of a tour. “We are trying to solidify that tour right now,” says Kim. “We’re just working with our booking agent, so we’ll see. I think it’s going to happen in September.”