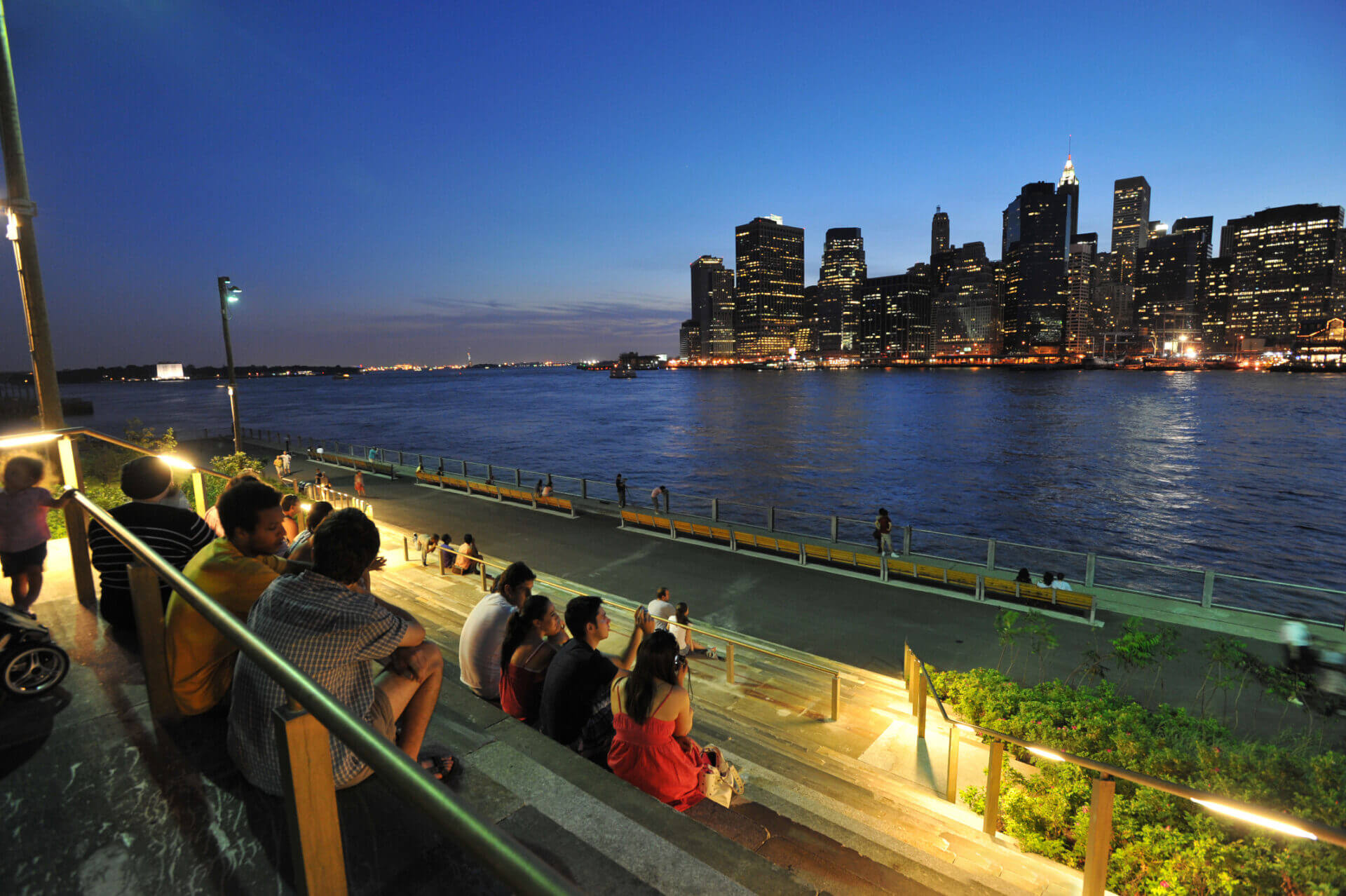 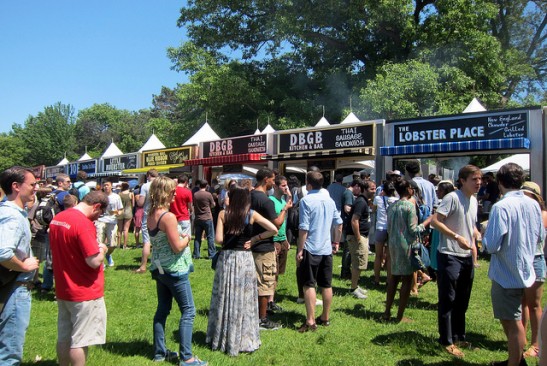 Waiting in line at The Great GoogaMooga.

Back in May, The Great GoogaMooga, a two-day food, drink and music festival in Prospect Park, inspired a Twitter firestorm after its ambitious designs buckled under the weight of long lines, food shortages  and an ill-conceived drink delivery system that caused hour-plus waits. Amid the complaints, once voice in the Twitterverse stood out. A. O. Scott (@aoscott), Brooklyn resident, Prospect Park super fan and New York Times film critic, questioned the park’s decision to use public land for a private, for-profit venture, even though the tickets were free to the public. (Food and drink vendors paid to be at the event.)

After comments like “hey #GoogaMooga: EAT ME!”  and “prospect park is sacred space to me. don’t like to see it vandalized this way,” Scott explained that the vitriol was “about a private $$-driven takeover of public space.” He went on to tweet that, “it’s wrong the way #Googamooga is taking over the Nethermead on a sunny May weekend.”

When it comes to New York City parkland though, the divide between public and private is not so simple. Indeed, the city owns the parks, but the funding that keeps them going is, in many cases, provided by private entities. As Emily Lloyd, president of the Prospect Park Alliance, wrote to Alliance members after the GoogaMooga, “We must seek new ways to raise money to keep the Park clean and maintained.  The Alliance now pays over two-thirds of the cost of operating the Park day-to-day.  An occasional large sponsored event, free to the public, is one of the main ways that organizations such as ours can build the capacity to care for the Park.  It was one we wanted to explore.”

In short, while The Great GoogaMooga was a for-profit event, money from it helped keep the Nethermead green and the trash cans from overflowing this summer, supporting the park far beyond what public funding alone would have accomplished. 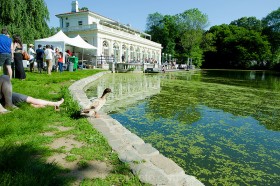 The Prospect Park Boathouse during GoogaMooga in May.

The Bloomberg administration has been showered with praise for creating more parkland for New York City than any other mayor in recent history. But park development and maintenance is a much more complicated combination of public and private funds than you might think. All of this new green space, and the continued beauty of parks like Prospect and Central, would not be possible without the work of private non-profits working on behalf of parks around the city, and the money that they raise.

The Prospect Park Alliance, the oldest of these groups in Brooklyn, was established in 1987.  Though it’s an impressive space today, Prospect Park at that time was a poignant symbol of urban decay. The playgrounds desperately needed repair, trees were dying, the carousel was closed and the boathouse was in bad shape. The park was dangerous, especially at night. The Alliance changed all that.  It supplemented the park’s basic operating budget–then completely covered by the city–with private funds.  This cash injection, coupled with a campaign to boost public awareness about the importance of parks, brought the 585-acre public green space back to life. According to Paul Nelson, press director for the Alliance, the group initially looked to the Central Park Conservancy as a model.

“In the beginning, our mission was to focus on restoring and raising money for capital projects,” Nelson said. “We’ve since taken on more and more of the day-to-day operations and costs. Now we raise money to supplement and bring in, for example, additional trash pickup, so we deal with both maintenance and implementation.” Prospect Park has, Nelson told us, an annual budget of $12 million, and (as Alliance President Emily Lloyd stated in her email) two-thirds of that is provided by the Alliance. 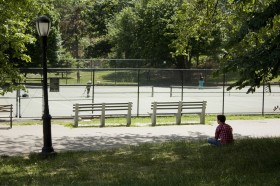 The Fort Greene Park Conservancy, which started as an all-volunteer organization in 1998, is similarly modeled on the Central Park Conservancy. Amanda Atlas, a member of the board of directors, describes the Conservancy’s relationship with the Parks Department as complementary.  But she also points out that the Conservancy spends a lot of time raising money for maintenance and improvement, because, she says, the city can’t provide enough.  “No conservancy would mean one person managing an entire region,” she explained.  “We’d have a lot more garbage and less pruning.  The park would not look the way it does, and the safety level would be much lower.”

Charles Jarden, the board’s chair, agreed.  “The city cannot fund a park like this to the extent that it needs funding, to keep the status quo even,” he said.  “So you totally depend on a good guild or friends group to step up.” 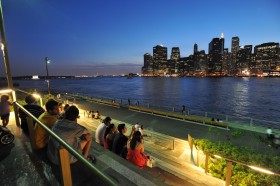 A magnificent view from the Brooklyn Bridge Park Pier.

This particular public-private partnership evolved as it did because the land on which Brooklyn Bridge Park was built was both state and city-owned.  Most of the property was owned by the bi-state Port Authority of New York and New Jersey, with smaller portions owned by the city.  Efforts to turn the piers off the Brooklyn Heights waterfront into a park were at work as early the mid-80s, but it wasn’t until 2002 that then-Governor Pataki and Mayor Bloomberg finally agreed to move ahead with what is now Brooklyn Bridge Park. 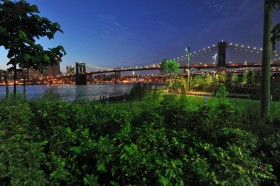 When the city and state put the park plans in motion, they also agreed to allocate public funds for its construction. “That number has increased as the cost estimates became refined and the city became more interested in finishing the park,” explained Regina Myer, president of the Brooklyn Bridge Park Corporation.  “Initially only $150 million was allocated, with $85 million from the state and $65 million from the city. Over the course of the past 10 years, the city amount increased to $220 million.”  The state contribution has remained the same.  The park, which is partially completed at present, has an overall construction budget of $360 million.

Brooklyn Bridge Park’s financial model is unique from others in the borough because its maintenance and operational costs are self-sustaining—part of a condition of the city for its allocation of funds. The park’s current operating budget is $5 million, all of which is generated onsite through concessions, permits, ground rent (a special type of long-term lease in which the renters have similar rights and responsibilities as owners, but do not own the land) and payments in lieu of taxes from the condominium building known as One Brooklyn Bridge Park.  This year, on June 19, the Brooklyn Bridge Park Corporation announced its second development project, a joint venture between Starwood Capital and Toll Brothers for a mixed-use hotel and apartment building that will also pay the corporation ground rent and taxes in lieu of paying regular property taxes to the city.  The project is to be completed by 2015. 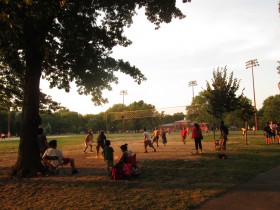 Each alliance and conservancy has a different arrangement with the city, and the Open Space Alliance in North Brooklyn has one that is particularly complex.  Unlike most alliances and conservancies whose efforts focus on one park, OSA is responsible for 120 parks in North Brooklyn.  The Alliance also acts as a microphone for a community that was promised 33 acres of additional parks as part of a 2005 rezoning plan of the Williamsburg waterfront. At the moment, the only parcel that has been turned into a park is the lot bordered by N. 9th and 10th Streets, Kent Ave. and the East River, and only two-thirds of that lot is useable open space.  The change in zoning was, according to New York State Assemblyman Joe Lentol, long overdue, because manufacturing “wasn’t coming back anytime soon.”  But the community fought for affordable housing and, according to Assemblyman Lentol, open space along with it.

“The city committed itself to a whole bunch of parks, some of which are already started, but most of them are still in limbo,” Mr. Lentol said.  “They promised these parks and now can’t afford to buy them because they didn’t act quickly enough.  But they made the deal and now they have to live up to it.” 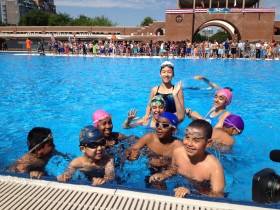 The newly reopened McCarren Park Pool is the jewel in the North Brooklyn park crown.

Because of this complicated history of zoning changes and rapid development in North Brooklyn, OSA manages the tricky task of convincing a frustrated community that mixing public and private funds is an effective way to get things done, said board member Dewey Thompson.  “This community can be very suspicious of government neglect and so much development,” he said.  “We’re still in the middle of a long process of getting accepted as a positive thing in the community.”

Unlike the Brooklyn Bridge Corporation, which is headed by the deputy mayor for economic development and building, OSA has limited power when it comes to implementing new park plans such as choosing design plans, architects and builders.  “We’re part of the discussion, but final say is with the Parks Department,” said Kurt Cavanaugh, assistant director of OSA.

So the next time you see a concert in a public park, remember that it’s probably doing far more than just enriching the cultural good of the city.  The contracts involved may well be helping prune trees and empty trash cans.  And if you want to get involved, there’s no shortage of volunteer opportunities–especially if you have a green thumb.

The Prospect Park Volunteer Corps, an internationally recognized volunteer program, takes on unpaid greeners and cleaners who plant and landscape throughout the park. History buffs with green thumbs can volunteer in Fort Greene Park’s Revolutionary garden, which grows herbs and vegetables from the Revolutionary War period. The Open Space Alliance takes on volunteers to help with litter, painting benches, and skilled tasks such as minor masonry, plumbing, ironwork and carpentry. And aspiring gardeners can also hone their skills at Brooklyn Bridge Park, where they receive special horticultural training as gardeners or join the “green team” to plant, mulch or clean the coastline.

“There’s always need for more,” said Nancy Webster, executive director of the Brooklyn Bridge Park Conservancy about volunteers.  “The park is not just grass and piers, it is people using these things.  And we are only going to thrive to the extent that it serves people and people in turn give back to it.  We welcome and cherish everyone who wants to be a part of what we’re trying to do here.”

Leave a Reply to Andrew