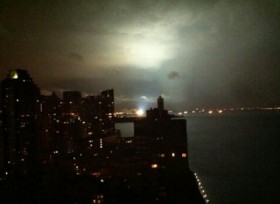 Mercury is in retrograde, a rover called Curiosity just landed on Mars and Usain Bolt just beat the odds to become the fastest man on the planet for a second straight Olympics. In short, weird things are happening all around us, which might explain why some were apt to believe the unusual light show in the skies above Sunset Park earlier today was the work of beings from another planet. Turns out it was just a generator explosion and not the plot line for Independence Day 2.

When reports early this morning of an explosion and fire in South Brooklyn first came in, many took to social media outlets to discuss it as a potential aliens vs. end-of-days indicator; however, Gothamist reports that it was in fact a transformer explosion on one of US Power Generating Company’s two power-generating floating barges in the waters off Sunset Park. Not as exciting as UFO sightings, but at least no one was injured and no environmental discharges have been reported. The company is still assessing the situation.