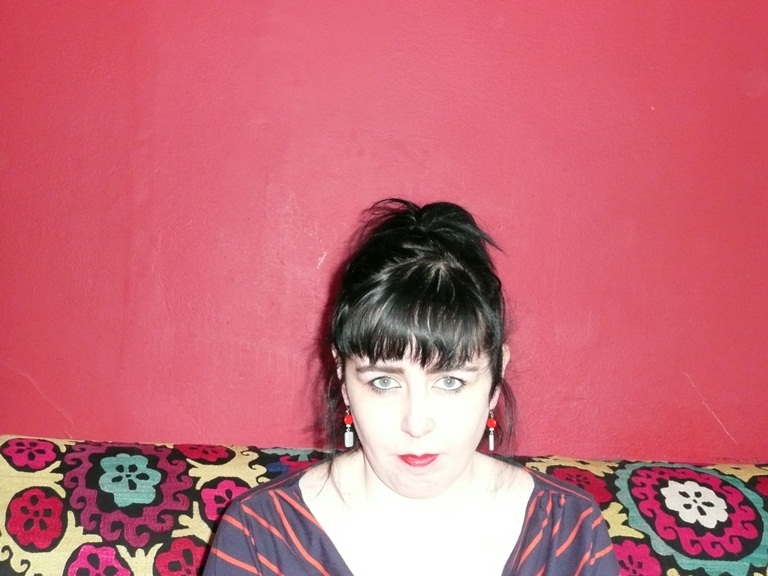 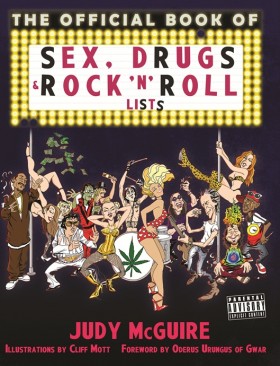 “You Shook Me All Night Long,” by AC/DC. “Heroin,” by the Velvet Underground. “I Want to Fuck You,” by Akon. “Flower,” by Liz Phair. “Cocaine,” by Eric Clapton.  Curtis Mayfield’s “Pusherman.” Any song by The Eagles.  Whether expressed directly or coyly cloaked in metaphor, sex and drugs have been the muse, mistress and medium for rock ‘n’ roll as long as it’s been around.

Judy, who is also the Dategirl columnist for Seattle Weekly, and the author of How Not to Date, spoke to BB about writing the book and dished on some of her favorite rock ‘n’ roll moments. She also shared a sex and drugs-inspired playlist with us on the BB blog.

How did the idea of the book come about and why did you wanted to do it?
People like Mick Jagger, Iggy Pop, and even a schmo like Fred Durst get to do crazy shit that the rest of us just don’t have the money, societal permission, or balls to do. We live vicariously through their antics, which is safer than getting a heroin habit or having to put Fred Durst’s penis anywhere near us anyway.

The book happened because I was at BookExpo America a couple years ago and I ran into Mike Edison–my co-host on The Mike & Judy Show. He’s an editor at Backbeat Books and was showing me a book they’d just done called The Official Heavy Metal Book of Lists. They’d also done The Official Punk Rock Book of Lists, so I just suggested The Official Book of Sex, Drugs and Rock ‘n’ Roll Lists, off the top of my head.

Anyway, they’re a fairly conservative company, located in the Midwest. We were just about to go on press, when one of the bigwigs decided to take a look at the book. He started reading [GWAR’s] Oderus Urungus’s intro and blew a gasket. He read more and freaked out. They pulled the book, cancelled my contract (but generously let me keep my advance and all the design files), and basically killed it, dead. I asked if there were maybe a couple pieces I could pull to change their mind, but nope. It was irredeemably filthy.

Mike felt bad, though it was no fault of his, and introduced me to his editor at Soft Skull, who promptly bought the book.

One thing that stands out in your writing is a (gleeful and wicked) sense of humor that doesn’t take the subjects too seriously. I’m sure it had to been a lot of fun in terms of researching and writing the book.
It was really fun, which rock ‘n’ roll should be! One of the best parts, was getting all these amazing people to contribute. Like Coco [Ice-T’s wife]! Though I did not meet the bodacious lady, her assistants, Sparkle and Soulgee were very sweet. Another highlight was dealing with Oderus from GWAR, of course. The man who got my book cancelled was amazing!

In compiling these lists, did you uncover any trivia about a song or a person that you never knew had an association with sex or drugs? For example, I didn’t know about that Barenaked Ladies song I’ll Be That Girl, or even Tommy Dorsey choking on his own vomit.
Who knew there were 101 songs about heroin?! I mean, I knew there were tons of pot songs, but heroin? Not exactly a peppy topic. But then most of the heroin songs weren’t exactly catchy… And yes, the number of people who died from choking on their own drunky puke was pretty long (seven), and actually had to be revised in an edit because Thin Lizzy guitarist Gary Moore’s cause of death looked like this, but as we were going to press, we found out it was really a massive heart attack that killed him.

I particularly liked the list “Attack of the Vagina Dryers: 12 Concert Experiences That Will Ensure You Won’t Get Laid,” in which you mentioned Rush and Yes…and I love those bands! And I liked Andrew W.K.’s “8 Rookie Party-Thrower’s Mistakes.”
I’m so glad it made you laugh—thank you! I got the vagina-dryer idea a long time ago when I went to see Hawkwind (it was a reunion show, but no Lemmy). I remember being struck by how incredibly unattractive and overwhelmingly male the crowd was. Shows in New York normally have a pretty good-looking crowd. But that show—yikes. I’m not exactly a supermodel, but I felt pretty foxy that evening. Well, until I had to sit through two-plus hours of that crap.

I have a humungous, panting, fan-girl crush on Andrew W.K. I’ve always found him hilarious—and there’s nothing he can’t do. So I just took a stab in the dark and wrote him. He—not an assistant—wrote right back. He put together a list that was funny and extremely well-written, and submitted it in a timely manner. Just an all-around nice guy.

I love Cliff Mott’s illustrations. How did you get him involved in the book?
Cliff is a fantastic illustrator. I’d never met him before, even though we know all the same people and have been to the same shows probably one billion times. I would love to claim credit for finding him, but he did the illos for both prior Books of Lists, so he was on board from the beginning. You can see more of his work—and buy some—at CliffMott.com.

How did you get people like Michael Musto, Richard Manitoba and Pat Kiernan to contribute to the book?
I just asked them. Michael Musto and Pat Kiernan had both published their lists, so I just asked if I could use them in the book. Both were really kind and said yes. Mr. Manitoba had done The Punk Rock Book of Lists, so he was happy to help a lady out. Richard Manitoba is one of the biggest sweethearts in rock too. Love him.

Loads of people said no, which is understandable because it’s kind of a pain in the ass and it’s not like I could pay anyone. Mostly people were overwhelmingly nice and generous with their time.

Is there one ultimate artist who epitomizes the sex, drugs and rock and roll lifestyle?
Keith Richards. He’s alive, which is a miracle. He was an unrepentant heroin addict/drunk for years, he’s a brilliant musician, and wrote one of the most compelling and hilarious rock memoirs ever. So many of these guys take themselves so seriously, but I never got the idea that he does. Mick, on the other hand…

Do you have a particular favorite list each from the sex and drugs parts?
That would be like picking my favorite cat! (I don’t have/like kids.) But I was really blown away by Norman Brannon’s homo/hardcore list. I used to go see hardcore shows all the time when I was a kid, and the homophobia there used to bug the shit out of me. I thought it was a brilliant analysis of the scene.

And though I technically wrote it, the step-by-step list of how Keith Richards managed to shoot up as soon as he arrived in New York City is pretty hilarious–cribbed and rewritten straight from his autobiography.