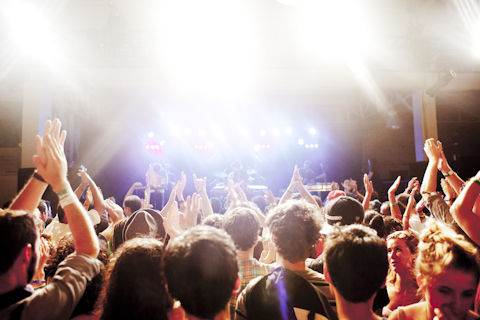 Inside the House of Vans last Thursday. Credit: Courtney Dudley, via BrooklynVegan

Last Thursday night was my first live chillwave experience–a style of music that can be described as synthesizer-infused indie pop washed in heavy delay and reverb (Think Peter, Bjorn and John meets Human League meets something a little weirder). It was the fourth party of FYF’s House Of Vans concert series, housed in a warehouse on Franklin Ave. in Greenpoint. The main attraction was Washed Out, the musical project of Ernest Green, a college graduate from Perry, GA who posted his home recordings on Myspace back in 2009 and was soon discovered by music bloggers and well… Subpop.

The night began with Lemonade, an enthusiastic three-piece dance outfit that mixed 80’s synth pop with 90’s boy-band vocals and a lot of electric drums. They greeted a small crowd with a “Hey Greenpoint!” at the beginning of their set, and watched it grow to almost full capacity by the end.

Out back was a line of Porta-Potties and a makeshift sink. There was a vitaminwater tent, stocked with free SmartWater and Coco-Refresh, alongside a Tacos Morelos truck and a Phil’s Steaks truck. Inside the complimentary beer garden, if you were over 21 and could make it to the bar, they were handing out the Heinekens.

Chairlift took the stage next and played to a full crowd. Laid-back slow to mid-tempo dance grooves took over with heavily delayed vocals and moody atmospheric synth and guitar sounds. Teenagers bopped and giggled self-consciously in the crowd while some took off to dark corners to make out. The twenty-something rest of the crowd did the same, minus the whole making out bit.

Outside the warehouse was still a line of people waiting to get in as others took off. One girl escorted her wasted friend, who could hardly walk, to a taxi saying, “Come on, come on, just a few more steps” and small groups could be spotted across the street taking smoke breaks from the hot party house.

By the time Washed Out came on the place was at full capacity and people were getting sloshed and ready to lose themselves in the wave (ahem, the chillwave). Awash in blue lights the band kicked off the set with “Hold Out,” the intro compelling the crowd to clap and chant “Go, go, go, go” in time with the bass drum, and exploding the room into one big dance party. I found myself in a strange pocket of people doing some type of ‘80s octopus dances (people swaying back and forth swimmingly like Axl Rose but flailing their arms like octopi), exercise moves (a girl was doing push-ups), raving, and reviving the ‘60s love movement (although, fortunately, everyone was dressed). I didn’t have the ecstasy or glow-sticks necessary to get involved in these sorts of things, so I just watched.

Somewhere mid-set Caroline Polachek from Chairlift returned to the stage for a cameo during “You and I.”  At this point beers were being snuck in and out of the room (no booze was allowed in the show area) and the smell of weed grew stronger. A group of teenagers were darting back and forth through the crowd seemingly looking for trouble but finding none. I felt like a kid again.

When the band kicked off “Feel it All Around,” which happens to be the theme song from Portlandia, I couldn’t help but feel like I was in an episode of the show. I wanted to put a bird on everything and everyone.

The Vans House Parties are still going strong but there are only two parties left! They are free but you have to RSVP at vans.com/houseparties. Free booze, free vitaminwater and free music. Go!