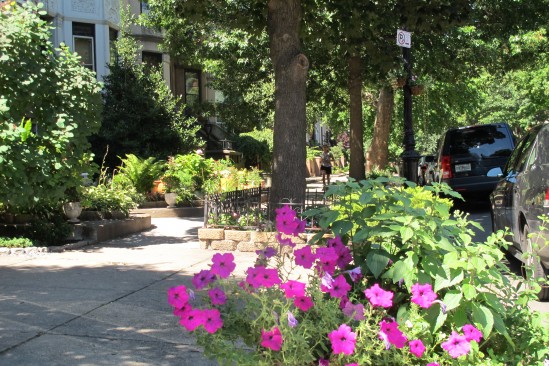 Being green might not always be easy, but it is rewarding, especially for the winners of the Greenest Block in Brooklyn Contest, an annual competition hosted by GreenBridge, Brooklyn Botanic Garden‘s community environmental horticulture program, every summer for the past 18 years. Winners were announced this morning.

Of the almost 200 blocks and 25 neighborhoods that participated in the contest, the greenest blocks belonged in Prospect-Lefferts Gardens, Ditmas Park and Flatbush. The residential block winner was Lincoln Road (between Bedford and Rogers Avenues)—the block also took top honors in 2009. Cortelyou Road (between Westminster and Argyle Roads) and Newkirk Plaza (between Newkirk and Foster Avenues) claimed top prize for commercial blocks.

While these blocks—and the subsequent neighborhoods they belong to—tend to fly under the radar when it comes to waxing poetic about Brooklyn’s urban landscape, GreenBridge Director Robin Simmen says residents of Lincoln Road have been building reputations for their green thumbs for quite some time.

“This block is no Johnny Come Lately; they entered for many years before they achieved the Garden of Eden effect that passersby experience on their block today,” Simmen says. “Between 2009 when they first won and 2012, they actually increased their citizen participation significantly and improved their tree care—quite impressive.”

Approximately 75 of the 80 homes on Lincoln Road participated in this year’s event, which was up from 60 in 2009 and added to its overall aesthetic. A children’s garden, with its plant species identified by ceramic tags made by children on the block, served as a centerpiece of this year’s submission.

Blocks were judged from mid-June through July by a panel of 20 experts, including journalists and BBG’s own horticulturalists. The criteria for the competition included: color and total visual effect, citizen participation, variety and suitability of plants, soil condition and use of mulch.

The Greenest Block in Brooklyn Contest started in 1994 as a way to support community development. The residential block competition caught on immediately and has been growing steadily every since—the commercial block competition took longer to catch on Simmen says, but businesses are finally starting to see the benefit of going green.

“Yes, Brooklyn’s business streets have been harder to motivate to green up than its residential neighborhoods, but as merchants realize that people are willing to spend more money on greener blocks, they are slowly starting to invest more in their streetscapes—and we’re here to help with special workshops geared just for them, like the one we did this year on subirrigated containers for hot, dry environments,” Simmen says. “Newkirk Plaza, one of the 1st place tie winners, uses them with great success.”