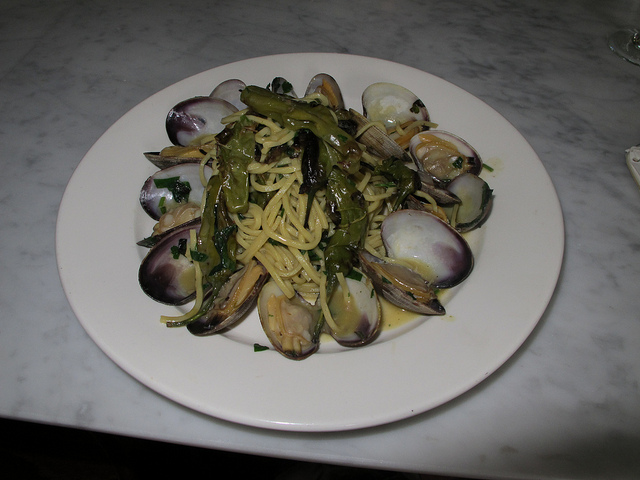 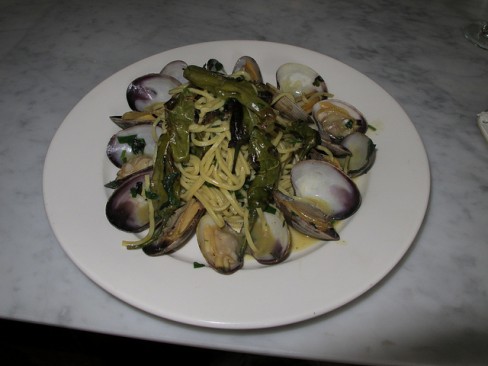 Last week week I paid a vist to Aita, a new eatery that has flown pretty much under the radar since opening in Clinton Hill in May. Chef Roberto Aita, who previously cooked at Fiore in Williamsburg, said he hopes to fill a void in the neighborhood–a bit of an odd statement considering his new spot is just a few blocks from three existing top-notch Italian restaurants: Locanda Vini e Olli, Roman’s and Dino. Still, it’s a prime location, at the corner of Waverly and Greene, formerly home to the underwhelming Speakeasy, and it seems that today’s Brooklyn is able to support a never-ending wave of refined Italian restaurants.

The best part of Aita is the almost-adjacent cocktail bar, Mayflower. You actually have to go out on the street to walk between the two, which are about 10 feet apart, but the bartenders can pass your drinks on through the kitchen, if you want to wait for a table in the bar and then continue boozing at dinner. It’s a tiny black-box space with just five seats at the bar, and a few small tables, plus a slatted window that lets you looks out on Waverly without really letting light (or onlookers). It’s a neat combo of the speakeasy vibe and people-watching. Amped-up classic cocktails, like a Moscow mule with citrus vodka and peppercorn, are very strong and very delicious.

Over in the main restaurant, the space is attractive and just a little sleeker than your typical new Brooklyn-y ambience, with a long marble bar accompanying the standard reclaimed-farmhouse decor scheme. Oh, right–the food. Despite my doubts expressed earlier, it is indeed quite an original menu: classic Italian with some interesting touches. Oxtail-stuffed ravioli comes in a roasted bone marrow sauce dotted with sage leaves. The homemade spaghetti (above) is served with clams and those all-of-a-sudden-on-every-menu shishito peppers. A cheese-stuffed fried zucchini blossom special was particularly fresh and tasty.

While I’d rate the fresh pasta not quite up there with Dino and Roman’s, all in all, Aita holds its own with the nabe’s three existing great Italian spots. They have also launched a brunch menu, with some inventive-sounding options (I’m particularly excited to try the crispy oyster benedict).