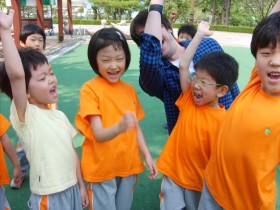 These kiddos think you should come to South Korea.

Is English your native language? Do you have a bachelor’s degree? If you answered yes to both questions, you can teach English in South Korea.

For the next installment of Making Payments, our series on creative student debt solutions, we’re taking out two birds with one stone: travel for broke college grads and making headway on those loans.

There are, in fact, loads of places a native English speaker with a four-year college degree can teach. A quick scan of the website Dave’s ESL Café yields job postings in China, Japan, South Korea, Indonesia, Vietnam and Saudi Arabia, just to name a few. But today we’re zooming in on South Korea because it’s at the top of the heap when considering three big factors: salary, standard of living and the ease with which foreign teachers can use that location as a jumping off point for further international travel.

The typical salary for a foreign English teacher is around 2.1 million KRW per month, roughly $1850 as of today’s exchange rate. Housing is generally included as part of the deal, with teachers getting a small studio or one-bedroom apartment to themselves. Schools will also generally pay for a round-trip ticket to Korea and back, and the cost of living, especially with regard to food and going out, is quite low. With a bit of effort, it’s possible to make substantial headway on your student loan debt, while experience a new culture. 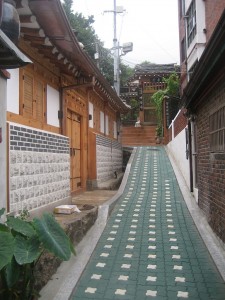 South Korea is a fascinating place that is somewhat off the travel radar, often lagging behind cultural behemoths Japan and China in public consciousness. But this legacy is changing as the country makes a big push to promote its rich history and culture among the weigookins (foreigners)—a word you’ll hear nonstop throughout your time in Korea. Newcomers can easily explore the landscape thanks to a great transportation system, and there are endless spicy, delicious, off the beaten path adventures for your tastebuds. Signage is often in both Korean and English (though they don’t always get it quite right), and there is an ever-increasing number of English speakers.

Thanks to a major push to advance English-language education, bringing native speakers of English into Korean classrooms is a tremendously popular practice. This boom means a plethora of jobs for foreigners who are willing to commit to one year of work and an opportunity to earn a nice chunk of change. It has also created a considerable expat community in the country, so new arrivals have an instant network of support and common experience.

“There are a few Daegu-specific Facebook groups where people can ask questions and get help from others,” said Stevie Baker, who lived and taught in South Korea’s third-largest city for two years. “There’s a really great, supportive foreign community in that city.” 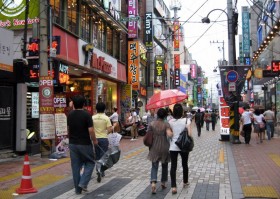 “If you’re going over there to pay off debt, be serious about it,” Baker advised. “I didn’t pay off anything extra than my regular monthly payments and my credit cards because I traveled extensively through Korea, traveled to Japan, took vacations, ate out a lot, partied, took up hobbies and took a bunch of classes.”  She said she didn’t make a significant dent in her loans, but had an amazing two years while still paying off some of “the smaller stuff.”

The process of sending money home is pretty straightforward. Most major banks have at least one person on hand who speaks English and focuses on international transactions. Identify this person early on and make friends. To conduct a transfer, you’ll need all of the information for your Korean account (which your school should help you set up) and your American one, such as the account and routing numbers. Be sure to ask questions about the fees on both sides, and be clear about that as well as current exchange rates. The money will have to be in your account back home before you can move it around to make loan payments.

So if you’re looking to head for the peninsula, where to start? You’ll have no problem finding teaching gigs on web listings, and all most require for an initial application is your resume and a photo. The slight challenge comes after that, when you apply to several jobs, get a response and have to decide which to ultimately take. 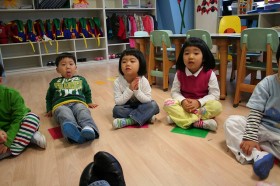 A typical day at a hagwon, or private school, where most English-teaching gigs are to be found.

“You want to always speak to, or ideally, email with the teacher you will be replacing,” Baker said. “Email is better because they can do it on their own time. Frequently, if you’re speaking to the teacher you are replacing [on the phone], they are in the same rooms as the director and may feel obliged to be kinder than they really feel.” Another smart move is to check out Korea blacklists online, where teachers from problematic schools warn newcomers against them. It’s also important to bear in mind that many private schools pay a placement service to find their foreign teachers, so the folks posting the ad are often times not the actual employer.  Be sure to ask to speak with the person who will actually be your boss before making any final agreements.  “If you’re a smart, resourceful person you will not end up in a terrible situation that you can’t get out of for an entire year,” Baker said. 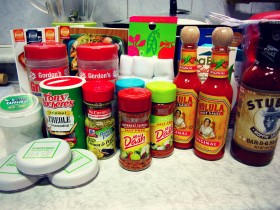 This is the randomness that you will miss in Korea. (Ranch dressing, bacos and Kraft mac n cheese should be in there too.)

Once you feel good about a school and a school feels good about you, it’s on to the headache of Korean bureaucracy. Requirements for the E-2 visa—the type you’ll need as an English teacher—change all the time, but at minimum will include a criminal background check, your actual college degree (you’ll have to take it out of its pretty frame like I did) and a photograph.

When you finally do depart, come with an open mind.

“Just soak it all in,” Baker said.  “Before you come make sure you pack sheets, the deodorant you like, any seasonings you love, try to learn the Korean alphabet, join the Facebook groups for your city and try to make a contact in your city before you even get there.”