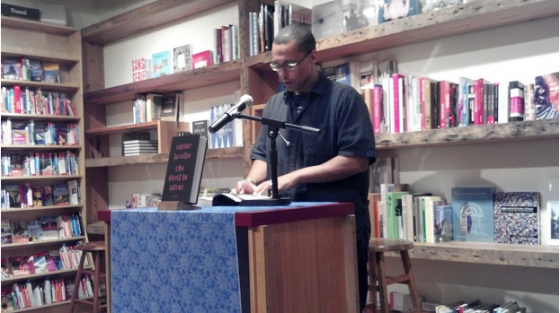 On the subway to BookCourt a panhandler asked me for money. I didn’t give him money, I looked away. Victor LaValle’s The Devil in Silver asks us to look, as he told us in the introduction to his reading at BookCourt last Wednesday. Two lucky coincidences had led me to LaValle’s writing: he taught my wife creative writing at Columbia, and a few months after learning this I read his excellent 2009 novel Big Machine, after discovering it on a Park Slope stoop.

My introduction to Victor LaValle in person was equally pleasant, as he personally handed out glasses of wine before the reading. In fact, he seemed a little too nice to be a novelist, pausing to check that some of the bluer language wouldn’t offend the younger ears brought along by their parents; asking the audience to move a little closer to the front so he wouldn’t have to shout. LaValle joked that he knew about a third of the audience anyway—grad students, family, friends. He grew up in Queens, a neighborhood sadly lacking in bookstores, so a Brooklyn reading felt a little like a local reading.

The comfy tone disappeared as LaValle started reading from The Devil in Silver, set in a neglected mental institution on the edge of Queens, the “most ethnically diverse region not just in the United States, but on the entire planet.” Pepper, a big, quick-tempered Queens native, is taken to New Hyde Hospital, by lazy cops who would rather get rid of him than have to fill out additional paperwork, despite the fact that Pepper wasn’t mentally ill, just a little stupid. At New Hyde, Pepper encounters the “disconnect of institutionalized health care.”

The passages LaValle read introduced us to some of New Hyde’s patients: Dorry, who tells Pepper a gruesome allegory about bison, and Coffee, Pepper’s OCD roommate, always asking for quarters. Dorry is “the kind of person Pepper might’ve given change to on a subway and never thought about again.” The kind of person you might look away from. LaValle humanizes these characters on the fringe of society, gives them a voice. He also introduced the monster of the book—not New Hyde’s doctors and nurses, a “real” monster—who in a spine-chilling scene jams its fingers down Pepper’s throat in the middle of the night.

Any novel set in a mental institution will immediately draw comparison to Ken Kesey’s One Flew Over the Cuckoo’s Nest. Indeed, one of the first questions asked after LaValle finished reading was about Kesey’s book, and the influence of other asylum literature on The Devil in Silver. LaValle wants to avoid the comparisons between the two books, describing how he gave Dorry a speech early on to ward off the association. When asked where he wrote the novel, he didn’t give the typical answer, a cute New York coffee shop that was his personal haven. Instead, the arrival of a new baby meant that he only got two hours away at a clip to work, and the closest place to write was Dunkin’ Donuts. It was a blessing in disguise. People from all walks of life frequented the donut shop, and many inspired him as he wrote, working their way into the novel.

One woman—who in a lucky coincidence had heard LaValle’s “Fresh Air” interview earlier that day, only to chance upon his reading at BookCourt as she was walking past—asked about his process for getting inside the minds of these mentally ill characters. He detailed how he “unravelled” them, fleshing them out as characters rather than psychiatric tropes. LaValle cited the horror movie The Cabin in the Woods as an influence, a prime example of entertainment challenging our preconceived notions of character. “It’s like jujutsu,” said LaValle of writing, “and hopefully by the end you’re on the floor—with appreciation.”

LaValle reads in Brooklyn again on 9/23 at the Brooklyn Book Festival (look for our preview next week), and across the river in Manhattan on 9/4 at McNally Jackson, 9/13 at KGB Bar (Behind the Book Reading Series), 9/18 at the Center for Fiction, and 9/28 at The Strand.