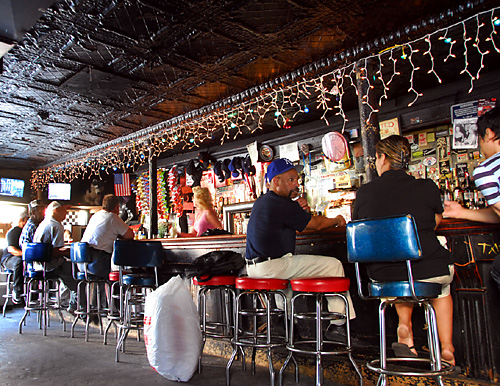 You know the dive on the corner of 3rd and Atlantic if you live nearby. Hank’s Saloon is hard to miss, painted black with orange and blue rockabilly flames, looking more suited to the disappearing East Village of yore than the Boerum Hill of 2012. It’s often blaring and/or or twanging live music and maybe also belching smoke when the grill on 3rd Avenue just outside the door is firing up some non-local, non-organic meat to be served on store-bought buns defiantly rife with gluten.

Inside, it’s dark, there are stickers on the cash register and the walls behind the bar, and the most exotic beer available is probably still Brooklyn Lager in the bottle. There are no strollers in Hank’s. Nobody knows your name and they don’t really care that you came.

So who does care? Here’s why I do: In an area saturated with ever more businesses that resemble each other in precious aesthetic, price range, and clientele, there’s nothing else like Hank’s. Maybe it would be a different story if it were called Henry and it served specialty cocktails, but it’s Hank’s and it’s threatened, according to reports first of impending foreclosure, which they beat but which was followed by surprise back taxes. Either way, the building has sold, so they only have three years left on the lease and an uncertain future beyond that.

The place deserves to stay because it has key elements that make a great bar:

1. It’s a little bit country, and a little bit rock and roll (but in a much preferable way to how Donny and Marie claimed to be).

When I was a single twenty-something in Boerum Hill in the early aught years, my new neighborhood seemed populated by couples who were more advanced than I in their life milestones: married or cohabitating, living in nice brownstones, pushing strollers. Where were the single mens at? I was drawn to Hank’s because it’s one of those bars where Johnny Cash is venerated, and so by applying the Johnny Cash Property (a term I just now coined) there would also likely be more down-to-earth guys there who I found attractive. (The lesson “you don’t meet nice men in bars” had not taken hold.) And maybe sometimes there were, but usually not when I was there.

2. You can go there in the worst of times and not be judged.

Eight months after my arrival in Brooklyn, on 9/11/01, as I took Metro North with a friend to escape our newly crippled city, I was aware for the first time that there were a limited number of ways out of the city, and that in emergencies like this those arteries can become impassable or they can outright shut down. On that grim day, my future husband, who I wouldn’t meet for another five years, wandered dazed with a friend into Hank’s after walking home over the Brooklyn Bridge, coated in the dust, having spent the most horrible morning of his life trying to help and watching many people die. In silent shock, the pair came to a stop at the bar. The bartender took one look and set up each of them with a beer and a whiskey back, knocking “on the house” on the bar. (That’s a good bartender.) Down the bar was a line of men with the same setup, covered in soot.

Commenters on Brownstoner recall that the local Mohawk steel workers bent their elbows at an earlier incarnation of the joint when it was called Doray’s Tavern. The modern Hank’s crowd is usually a pretty mixed bag, and despite my early-aught years theory that gentlemen who would be of interest to me frequented this bar, experience proved different. The standout encounter happened when my I stopped in to Hank’s on the way back from Prospect Park with my friend Leah. A young guy who was wearing a black eye mask zeroed in and took quite a shine to me. He told me he’d assigned himself this project where he wore the mask constantly for months on end. His goal was to explore something about identity and how people perceive other people. Because I couldn’t not ask if he wore the mask in the shower, Masky (incorrectly) took that inquiry as a sure sign of my romantic interest. He caught me off guard when he asked me for my phone number, so with the dread of knowing I was only putting off hurting his feelings, I gave him my real number.

As Leah and I passed a lazy Sunday in my apartment the next day, my brick cellular telephone lit up at least four times with an unknown number and and played its little Nokia song as Leah looked at each other wide-eyed. Each time, I let the masked man go to voice mail.

You might say, “Come now, Colleen, you did not give poor Masky a chance.” Perhaps that young man behind the eye-mask was just like a dashing Ryan Reynolds in his role of the Green Lantern, or maybe he would have been my own Wesley doing Dread Pirate Roberts cosplay. But no. Pretty much definitely not.

I avoided Hank’s until my admirer moved to the West Coast the next month (a plan he’d told me about when we met), but I did see Masky one more time. I spotted him from across 8th Avenue in Park Slope and ducked behind a tree. I was with a guy I was dating who I met at the enormously popular Victory cafe, which has since also been evicted. We were both delighted with this Masky sighting. However, the young man I was with was less enthused about dating me. And so it went for a few more years of terrible dating in New York City, about which I now hold a two-word policy: Never Forget.

I don’t hang around in bars anymore, but I hope Hank’s is allowed to stay open for those who like their bars a little rough in an increasingly less weird part of Brooklyn.