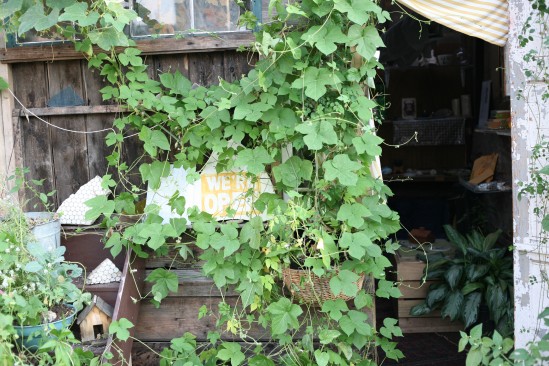 Perfect Nothing Catalog, a pop-up shack in a garden in Greenpoint

Pop-up shops are as abundant in Brooklyn as they are ephemeral. It seems though, that we still have room in our hearts, and money in our wallets, for a pop-up shack. The Perfect Nothing Catalog–a shack full of artsy knickknacks located in a community garden in Greenpoint–has been drawing customers to the far end of India Street all summer.

“Once people are out here, they seem to be into it,” says Frank Traynor, the shack’s soft-spoken owner. “In the beginning, people would come all the way to the door, and they would just stand in the doorway and look in.” 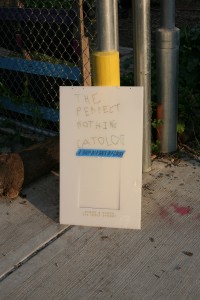 Given the remoteness of the area and the ambiguity of Perfect Nothing (no price tags, a website with a few pictures and fewer words and a hand-lettered sign tied to the fence out front), a bit of trepidation is understandable.

On a recent Wednesday Perfect Nothing’s inventory included stash jars, salt and pepper shakers shaped like apes and orangutans, corn cob pipes, vintage swim trunks, denim shirts by Made in Lieu, a pair of ice skates, a Chia Pet without its sprouts and oblong ceramic vases that looked like they’d taken one too many spins on a potter’s wheel. “One of the first things that I got were these ceramics by an artist named Marija,” Traynor says, picking up one of the vases. “They’re these awesome, mottled, marbled, sort-of-sloppy ceramics. They resonate with me as something natural, in that they’re so handmade they seem like a loose intention.” 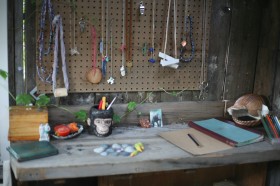 Most of the prices at Perfect Nothing range from $4–$100, with a few items in $225–$250 range. Traynor uses his iPhone and a Square to process credit cards. Both were sitting on a desk next to a new drawing he was working on and a bowl holding a half-gnawed carrot and a tomato. Unlike everything else in the shack, the veggies weren’t for sale–they were leftovers from Traynors lunch, one of the many perks of being in a garden.

Traynor salvaged the shack from a friend’s property in upstate New York this past spring and brought it back to Brooklyn–a feat that involved cutting off part of a pickup truck to accommodate the shack. He was a man with a shack and nowhere to put it until a fellow bar patron overheard him discussing the shack situation and put him in touch with Trish Andersen and Maureen Walsh, the interior designers behind Domestic Construction. They had room in their community garden, Design.Plot, adjacent to their studio on India Street, and were happy to have Traynor set up shack there. 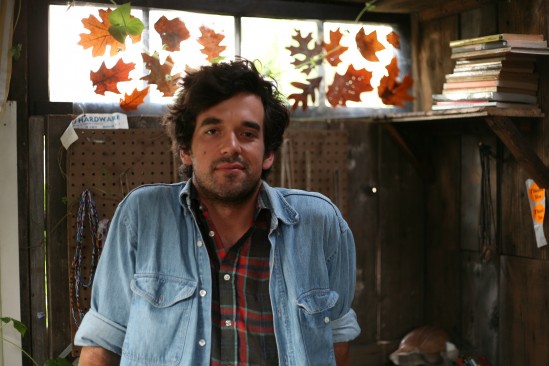 Perfect Nothing opened on May 4 in the back corner of the garden. Originally, Traynor, a sometimes sailor who used to run a small art gallery, as well as a church in Florida before moving to New York three years ago, sold thrift store finds, but as word spread quicker than the vines in the garden–some of which have started to crawl through the cracks into the shack itself–an onslaught of local designers started talking to Traynor about selling their stuff.

“I’ve been approached in every way that you could imagine—through the Internet, through crazy chance on the sidewalk, through friends, through people hearing about it—and then every person that contributes something, or comes in, knows two people who’d be great for the space,” he says.

The way Traynor, who rents a room near Perfect Nothing, describes his inventory is akin to a curator talking about a gallery. “I feel like all of these things put together say something larger than each of them individually, and that’s what I’m more interested in even,” he says. “Sometimes something sells, and I’m like ‘oh I wish it hadn’t’ because I really liked it, but you know, that’s part of what this is—to sell stuff.” 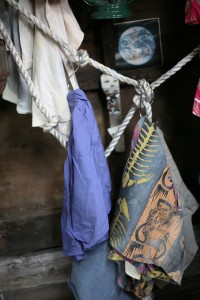 Swim trunks secured to a rope in the shack lend it a Gidget vibe.

Other than rainy days and the occasional garden wedding, when Perfect Nothing closes, Traynor has spent every Wednesday through Saturday this summer, from noon to 8 pm, sitting in his shack. “There’s a lot of time where I’m sitting by myself, but that to me’s not boring, not with the cats and the flowers,” Traynor says. “I draw, hang out with the cats, hang out in the garden, take naps on the floor,” which is covered with a Persian rug. “If the weather’s nice, we’ll stay open for a while longer,” he says. “Maybe we’ll make it to Halloween. I’m not ready to return to reality yet.”