Here’s a Little Help Figuring out Maps in iOS 6

iPhone users who update to iOS 6 may find themselves suffering from sad-face, especially heavy maps users. Not only has an Irish farm been mislabeled as an airport, towns like Uckfield in England  are showing up in the wrong location.  There’s even a tumblr full of funny iOS 6 Maps mistakes. Missing Swedish cities aside, here’s how to use the new Maps apps in New York.

Using it
When you open up the Maps app for the first time, you’ll see a much different screen. 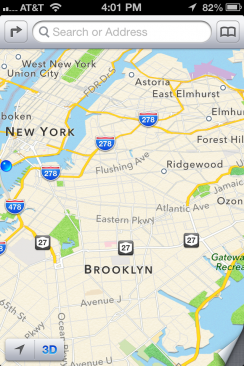 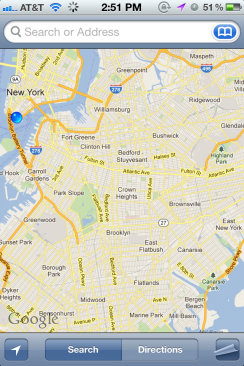 The Map app you're used to.

Apple has given the app a makeover, consisting of a fancy new 3D view and other lipstick-and-eyeliner improvements. It looks great, but Maps also behaves a lot differently. You’re provided with one “Search or AddresTs” field at the top of the screen. It feels a bit awkward if you’re used to starting with the “Search” and “Directions” options at the bottom of the screen. To get at directions now, click the arrow in the top left-hand corner of the screen or start by clicking the Bookmarks icon on the top right. It’s simplified, makes more sense, but it feels like someone moved the furniture around in your apartment without asking.

Transit Directions
This is where the new changes hurt most, especially for city dwellers who’ve come to depend on the Maps app for finding their way around. 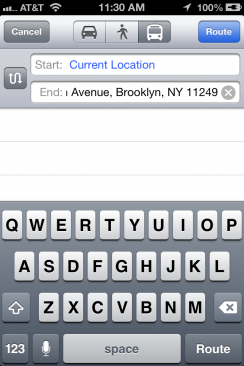 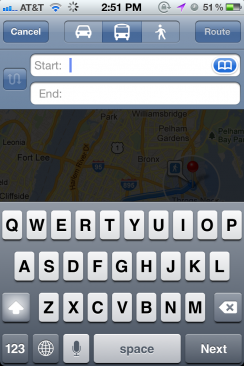 After typing a “Start” and “End” location and selecting the bus (notice how the old Maps app has transit in the center and now it’s bumped far right), you arrive at a “Routing Apps” screen.

Apple doesn’t have the cache of info it needs to offer up transit directions, so it’s relying on third-party developers to help iPhone user navigate public transportation. Pickings are slim right now, but they’re sure to improve in the coming weeks, if not days.

Embark (free) is great, at least in my testing. The app offers two ways to navigate. Either type in an address or tap the subway stop on the map you’d like to depart from or arrive at. There’s hope that HopStop, which you’re more likely to be familiar with, will soon be integrated with Maps as well.

The Real Bummer
Why even bother with Maps if you’re going to end up in a third-party app? Especially when the apps that supplement Maps aren’t so good at finding addresses based on name queries? 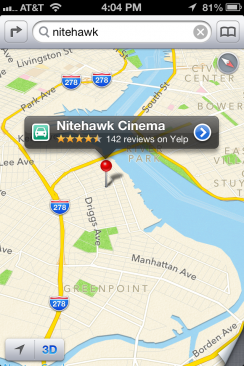 You'll want to make note the actual street address of your destination... 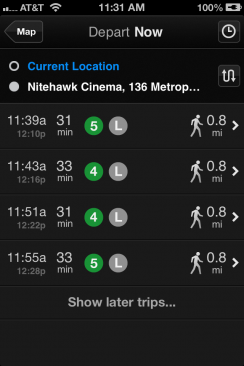 Typing in Nitehawk Cinema confuses apps like Embark and Hopstop, which means you’ll have to switch back to the Maps app and start the process all over if you don’t know a specific address or stop. Toggling back and forth between Apple’s Maps and the third party applications isn’t fun and gets frustrating.

It isn’t very often that Apple puts out a product inferior to the one that came before it. Despite Maps’ better looking, cleaner interface, it’s now a less useful application, but fear not. Mapping is a complicated game, one that took Google a long time to get just so. Apple has millions of iPhones and other devices out in the wild, gathering data as we speak. Eventually, Apple will bring the app up to speed with the Google maps we’ve all become accustomed to. The more Maps is put to use by users, the more information Apple will have to give us the app we’ve come to expect. If you’re a die-hard Google Maps user, rumor has it that Google will eventually offer its own Maps app for iPhone users, but until then you can always use Google Maps on the Web.

Leave a Reply to HopStop